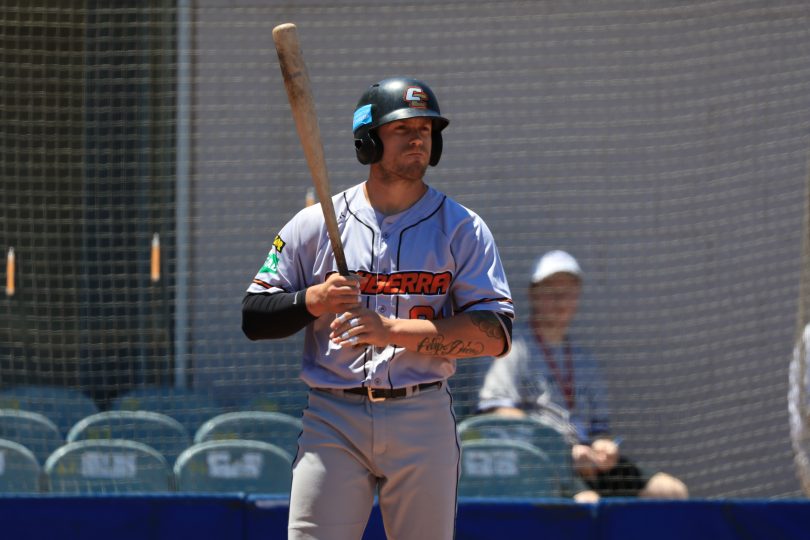 The Canberra Cavalry offence could not get going in their opening series against the Melbourne Aces. Photo: SMP IMAGES.

The Canberra Cavalry could have not started their charge to their second ABL championship in a worse possible fashion, with the Cavs losing their opening series to the Melbourne Aces four to zip.

The Aces swept the Cavalry aside with surprising ease, which was a shocking start to the season for last year’s finalists who only scored a meagre five runs across the four games.

A misfiring offence did not back up excellent pitching performances from Steve Kent and Josh Warner across the weekend, leaving the Cavs on the bottom of the ABL north-east conference.

Manager Keith Ward said despite the disappointing start to the season, the club is not panicking yet and remains confident of returning to winning ways when they head up the Federal Highway to take on the Sydney Blue Sox this weekend.

Ward said the Cavalry needed a more team-based approach at the plate if they are to get their ABL season back on track against their bitter rivals.

“The game can speed up on you if you are not in peak form and when that happens, you tend to swing too big and try to do too much instead of giving the next guy in the lineup a chance to do some damage with you on base,” he said.

“We just need a reminder of the team-based things and making sure we stay within ourselves.”

Ward said early runs on the board against the Blue Sox will be the key to success, with the manager putting his faith in his stellar pitching roster. Having a slow start to the season comes as little surprise for the Cavalry, with the majority of their squad only touching down in Canberra last week.

“You can take all the batting practice that you want but you need to get used to that game-speed to get into a groove and to feel comfortable,” Ward said. “Now we have four games under our belt, I expect the guys will be in a position where they will feel a lot more comfortable.

“For the past number of opening series we have gone in a little under-done and we have lost the opening series so we are not panicking. We know we have some quality players in a really good squad and we have shown in past seasons that we can bounce back from a slow start.

“We just need to create some momentum this week and get on the right track and I am sure everything will be okay as we move through the season.”

Denise Bourke - 7 hours ago
insurance'll cover that Shirley View
John Killeen - 7 hours ago
At least the new electric fire trucks will always be first on-scene to a battery fire! View
Colin Mitchell - 7 hours ago
Nick Anderson and they don't have service to... View
Opinion 2

@the_riotact @The_RiotACT
Pilot. restaurant has been applauded for "playful, confident and polished" food by @GourmetTweets, who gave the Ainslie local their gong for #Canberra's best #restaurant https://t.co/KU7VsT8YEG (10 hours ago)