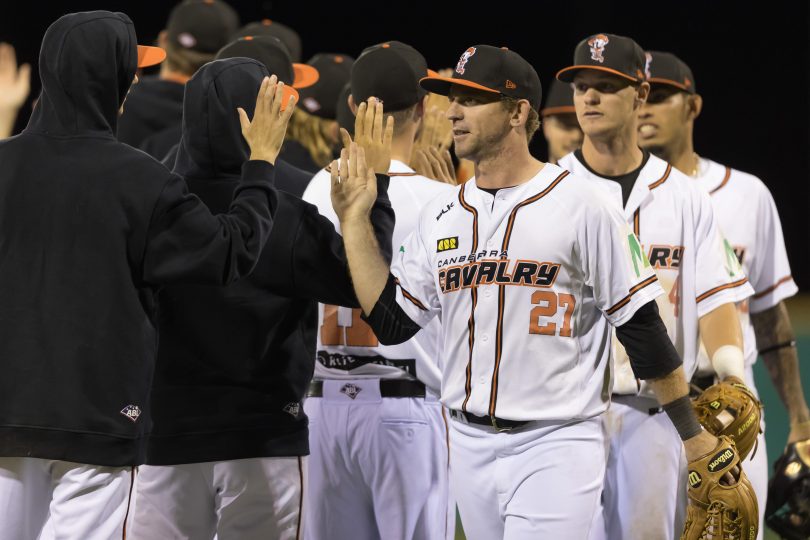 Is there a more unique sporting experience in Canberra than a night at the MIT Ball Park watching the Cavalry go round in the Australian Baseball League (ABL)?

For many, such as myself, raised on a diet of cricket and the football codes, baseball is quite a visual experience – with the oversized hot dogs, to the organ music, to the action and by plays on the field.

This season, the experience will be heightened with the ACT Government investing 5 million dollars to redevelop the Narrabundah facility.

The Cavalry’s business model has also been transformed into a community-ownership concept with a significant portion of the club’s ownership directly in the hands of its community members.

There is also a strengthening of the Cavalry’s ties to Asia with the club partnering with the Japanese major league team, the Yokohama DeNA Bay Stars. The partnership will bring elite Japanese baseball talent to Canberra to play for the Cavalry. The ABL has been strategic with the push into Asia with an all-Korean team and several Taiwanese all-star players involved in the Australian League.

Coinciding with the strengthening of the ties with the Asian baseball community, the Cavalry have also started the search for a new major sponsor ahead of the upcoming season.

The benefits to a sponsor would appear obvious, with the club’s footprint not confined to the Canberra market but offering broad regional appeal.

Director of Business Operations Dan Amodio says, “The partnership provides ubiquitous branding across all aspects of our team operations, including on-field, in-venue, through international broadcasts, and our digital platforms.”

The appeal of baseball in Asia can’t be underestimated with the belief that the profile of the Cavalry will lift considerably this season through the broadcasting of games throughout the region.

Amodio adds, “But what’s truly special about this partnership is the connection you’ll foster with the community through our sport, especially as we move back into our newly upgraded home.”

So, ‘Take me to the ball game’ will take on a new meaning this season with a new facility and a new ownership model. The missing piece of the puzzle to ensure the commercial sustainability of the club is a major sponsor.

If you are looking at sponsoring a sporting team in Canberra with a community-based ownership model, and with broad regional appeal through Asia, this could be the time to take that next step.

For more information, contact Dan Amodio on email at dan@canberracavalry.com.au or via phone at 0421 735 520.

chewy14 - 23 minutes ago
"A responsible and competent government would" Well there's your first problem. They haven't been forthcoming with robust bus... View
michael quirk - 2 hours ago
The government has yet to provide evidence to justify the light rail extension, the viability of which is tenuous given incre... View
News 115

Jay Annabel - 35 minutes ago
Ajay Cee ...... a drastically reduced number in 2020 because of covid lockdowns. View
Ajay Cee - 2 hours ago
Jay Annabel 36 in 2020. View
chewy14 - 3 hours ago
JC, Seeing as I've been the one quoting directly from the national plan, your memory seems a bit fuzzy. And I'm still waiting... View
News 1

Capital Retro - 43 minutes ago
The next step is to equip the ravens with lasers. Death to all drones!... View
Community 6

@The_RiotACT @The_RiotACT
A plastic surgery clinic and medical centres are among new exposure sites, and Calvary has confirmed a fully vaccinated aged-care staff member has tested positive https://t.co/RE8RHLqgTF (18 minutes ago)

@The_RiotACT @The_RiotACT
A new @ACOSS survey has revealed 85 per cent of income support recipients cannot access COVID-19 #Disaster Payments and are struggling to survive, including up to 20,000 #Canberrans https://t.co/0w2XlrG1qc (59 minutes ago)