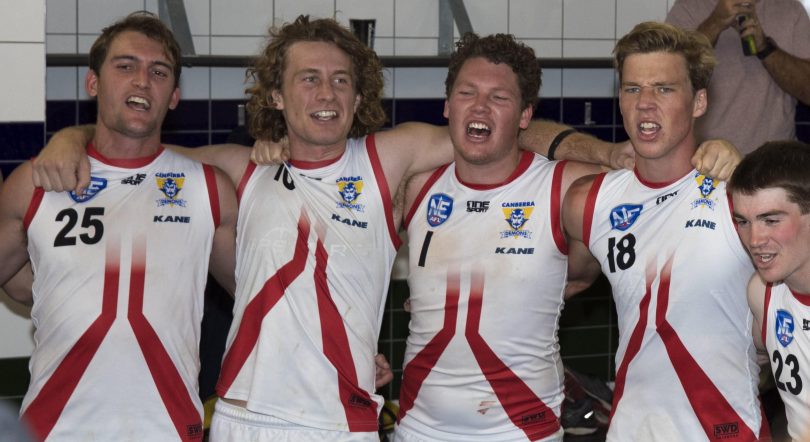 Mitch Hardie (second from left) and his side are four quarters away from a grand final berth. Photos: Supplied by Canberra Demons.

They hadn’t won a match in the past month, they were playing Sydney University who thrashed them only a few weeks ago, and it was their first finals appearance in their short existence. The Canberra Demons were supposed to be nothing more than easy-beats in the NEAFL finals.

But no one told them.

Last weekend the Demons booked their spot in a grand final play-off with a breathtaking nine-point win over Sydney University at Blacktown International Sportspark, setting up a date with the Sydney Swans in Saturday’s preliminary-final (8 September).

It was Canberra’s first win in NEAFL finals history as well as the NEAFL’s first sixth-placed side to progress past the elimination final stage.

The side was overcome with emotion after the final siren and half forward Mitch Hardie said there were a couple of tears shed.

“It was the best win I have been a part of at the footy club,” Hardie said. “Aaron [Bruce] was telling us on the bus home that he shed a few tears.

“Sydney Uni has always been near the pinnacle of NEAFL level and we have struggled against them in the past and we came in as massive underdogs who hadn’t won a game in the last month.

“To play and implement the gameplan Kade Klemke put in front of us and gave us a bunch of emotions but mainly the confidence to pull off a win like that at such a huge time of the year.” 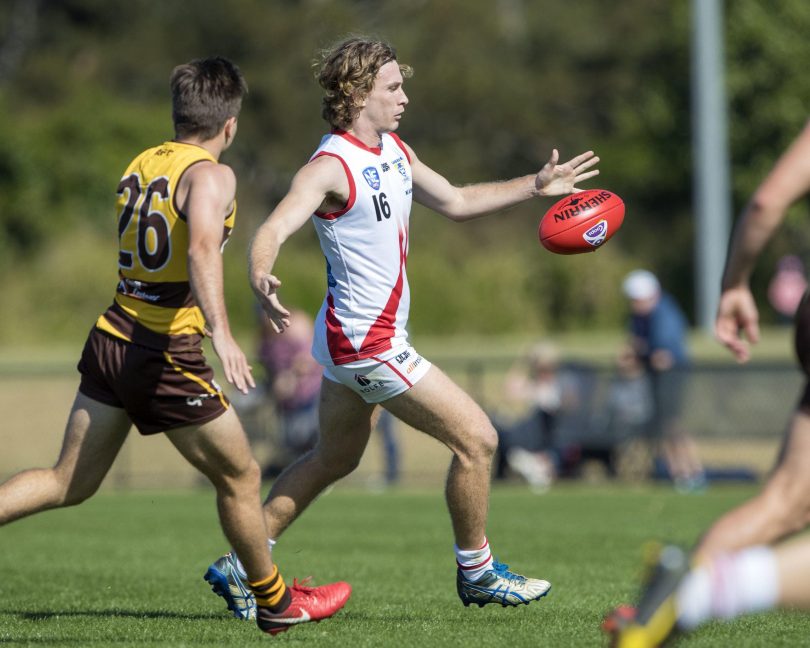 Looking back to when he first made the move to the nation’s capital to pursue his footy career two years ago, the Leeton product admitted it was hard to adjust to living in the city but said he wouldn’t change it for the world.

“Kade offered me the opportunity to come up and do a pre-season with no real promises. It was a hard adjustment coming from a town where everyone knows everyone to the city,” Hardie told RiotACT.

“I wouldn’t change it for the world now but it was definitely a shock when it first happened. But now that I am here in the great environment at the Canberra Demons, I look back and I am extremely grateful that I took the opportunity when it was given to me.

“It’s like a big family and we are all best mates. At times, we have seen each other seven times in seven days of the week and we spend a lot of time together. In terms of culture, I would argue that no other team has a better culture than the Canberra Demons.”

Next stop: A NEAFL PRELIMINARY FINAL

All that stands between the Canberra Demons and a finals berth is four quarters of football and the Sydney Swans, who overran the Dees in a thriller three weeks ago after Canberra led the Swans by 23 points. Hardie is confident their season is far from over.

“The best thing about the last few weeks is that we haven’t really felt the pressure and we are living with the underdog status,” he said.

“We have tried to have as much fun as we possibly can and try not to think about it too much. If we have had a bad loss throughout the year, we have just moved on quickly and haven’t dwelled on them.