Canberra is heading for a record year for kangaroo-related road crashes as food supplies are depleted and more kangaroos are attracted to the ‘green pick’ by our roadsides. Photo: Supplied.

Canberra is heading for a record year for kangaroo-related road crashes, with Long Gully Road and Sulwood Drive in the city’s south identified as the worst hotspots for collisions.

ACT Parks and Conservation director Daniel Iglesias said that there is likely to be close to 4,000 eastern grey kangaroos killed on ACT roads in 2018 – an increase of around 1,300 on previous years and something “never seen here before.”

Mr Iglesias said that it is little more than halfway through the year but already ACT rangers have been called out to 2,291 road incidents involving kangaroos to date. This compares to 2,634 incidents for the whole of last year and 2,889 the year before.

Long Gully Road and Sulwood Drive are currently seeing the highest number of kangaroo-related collisions but the Monaro Highway and Caswell Drive are also problem areas.

Mr Iglesias said that the increase in kangaroo collisions is being caused by Canberra’s extremely cold and dry weather depleting grass supplies for the kangaroos and attracting them to the “green pick” at roadsides. 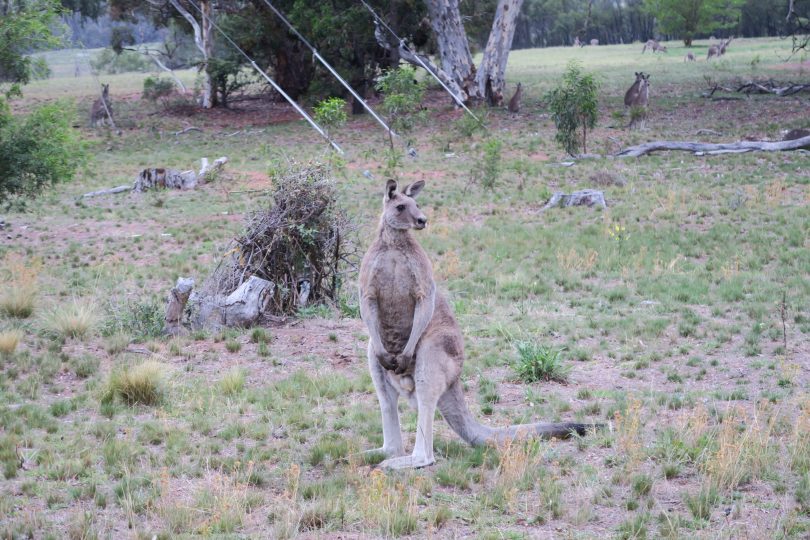 He said the cold weather and frosts dry out the grass and take away its nutritional value, while the lack of rain adds to the impact, with the dry spell forecast to continue.

Kangaroos also tend to be looking for food at the same time that most drivers are on the road.

“We’re all driving at the times when dawn and dusk is happening, which is when they move around the most,” Mr Iglesias said.

He urged people driving in suburbs that front parks or reserves to be very vigilant.

“When a kangaroo comes to you at an angle last minute there’s nothing you can do.”

Mr Iglesias advised motorists to get to know the times and places kangaroos are most likely to be on the road and to be particularly careful. Slowing down helps because it improves reaction times and can reduce the impact of a crash.

Earlier this year, Canberra was named the animal collision capital of Australia for the second year running – recording more collisions between motorists and animals than any other Australian capital city. 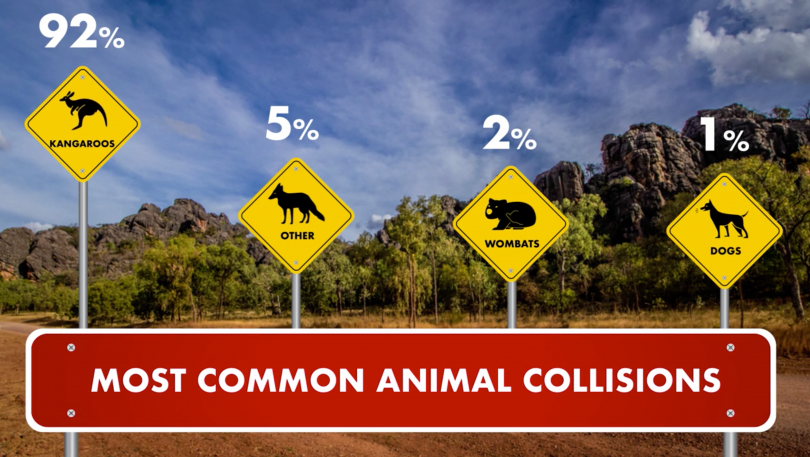 The main animals that drivers collide with on ACT roads. Image supplied by AAMI.

Have you collided with a kangaroo recently or had a close call? Can anything be done to reduce the number of kangaroo-related crashes? Let us know in the comments below.

Tend to see a lot of dead ones along Kuringa and Clarrie-hermes. Never actually seen one alive, but there tends to be a fresh one every 2nd day…

I’ve been driving for 35 years and have never hit a roo until this year, in which I’ve hit 4.

Numbers are half the problem.

Government can’t make it rain, and the region is experiencing dire conditions. Talk to any stockfeeder and they’ll tell you they are struggling to keep up with demand, and roos, as well as stock, are starting to venture more onto the road verges and into the outer suburbs looking for feed. People either need to take into account the changing conditions, which are going to get worse if we have a dry spring, and anticipate more animals close to the roads, get a bullbar, or make friends with a panel beater.

I think I’ve narrowly missed roos at every one of those locations this year. The whole of Ainslie is Roo-ville and I’ve even seen them in Braddon...

I just missed two on Yamba Drive just after 6 tonight.

Hopping from Campbell High sports oval to Corranderrk Street. Big one too.

Josh, I think we drove past a very hot spot

That was ridiculous. It'll be smelling good now.

Deborah Jane Moore Darren hit one on thawa drive last week when he was picking up Nic from the movies. 9pm at night just 200 m from home. $1000 excess to fix it. Expensive movie ticket

The most Kangaroo crashes for a few years, Panel beater in Canberra cannot keep up repairing these vehicles. Where is the ACT Government standing on these pests being culled. And i mean in the ACT not NSW

Last cull! Where was it exactly? So many roo's along Majura Road, dead and alive everyday. Another cull is needed!

Barry Paul Buki had a collision with a roo on Parkes Way and it wrote off his car!

Barry Paul Buki did you buy that car from sameer 😂

Contraception darts or major cull. Paddocks are over-run with them.

Got them coming down the back of our place now. Even in daylight

Ranting aside, how about just being aware of where and when they are likely to be active and driving accordingly. Yes – anyone can be unlucky at some point, but there are drivers who seem completely oblivious to typical roo behavior near roads.

What exactly is “typical roo behaviour”? From what I’ve observed it involves appearing out of nowhere and jumping directly into your car.

Emily Lawrance - 21 minutes ago
After reading that though I have a vague recollection of reading an article about him retiring.. View
Food & Wine 7

Lazza Sant'Ana - 8 hours ago
👍🏽 I am! I had some yummy Brazilian picanha with farofa and molho vinagrete just last weekend. Highly recommend this. Y... View
Property 3

Ol L - 9 hours ago
Why be a rude goose? You lost out to a higher bidder, no ones running a charity here. View
show more show less
*Results are based on activity within last 7 days

A man allegedly continued to have sex with a young woman after she told him to stop, reportedly telling her,...
*Results are based on activity within last 7 days

For a planned city that is supposed to be a shining light on the hill, Canberra is rotting at its...
Sport 20

The most emotional, crazy game in the history of the Asian Cup occurred at Canberra Stadium in 2015. Ben Williams...

@The_RiotACT @The_RiotACT
Canberra has the lowest survival rate for businesses in the country. A Budget submission says the government should find out why as part of a long-term road map to grow the private sector https://t.co/4LGv4euHXQ (33 minutes ago)