Canberra Hospital. The Masterplan will guide its growth over the next 20 years. Photo: File.

Plans for Canberra Hospital’s long-term growth have been whittled down to two Masterplan options that the government has released for community feedback.

One option provides a connected design that co-locates core clinical health services in the north of the campus and has a large central open space.

It has a standalone logistics centre to handle services related to medical supplies, waste, laundry and food with dedicated access. It also provides an internal loop road network and pedestrian paths.

The second option also provides space for long-term future expansion, but has a smaller central open space and an additional large open space to the north of the main clinical services tower.

The logistics centre is sited underneath the new central open space and occupies some of the potential underground parking space.

It would be accessed from Yamba Drive and not have its own designated access road, with service vehicles crossing the new north-south through-road from Kitchener Street to Bateson Road and into Yamba Drive.

The new Clinical Services Building and the Centenary Hospital for Women and Children, separated by open green space, would be connected by overhead walkways and underground tunnels. 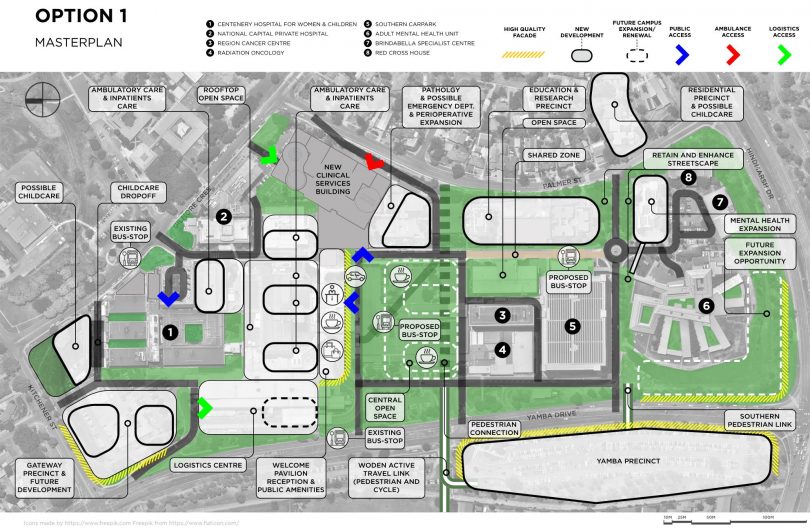 The options are part of the draft precinct model for the campus showing how the hospital could develop over the next 20 years.

It was developed after the initial consultation on the Masterplan.

The consultation will be conducted online, where participants can compare and contrast the options for connectivity, vehicle and pedestrian access, parking, public transport and open space, and through a series of workshops throughout July and August.

Health Minister Rachel Stephen-Smith said the feedback received showed the community wanted an accessible and safe hospital campus that was easy to navigate.

READ ALSO She writes just like a (crazy) woman, but she bakes (sometimes) like a little girl

Ms Stephen-Smith said the release of these designs was an opportunity for Canberrans and people in the surrounding region who also use the hospital to provide input on the proposed designs.

“The options released today incorporate feedback gathered through the first phase of consultation, as well as through detailed services planning and building condition assessments across the campus,” she said.

“While the Masterplan work has found that there is room on the existing campus to cater for growing demand, the draft options also take into account the need to ensure Canberra Hospital’s critical services can continue as the facility is modernised over the next 20 years.”

Ms Stephen-Smith said the feedback will give the government more detail on what is important to Canberrans about the campus, and how well the precinct model and draft Masterplan options captured earlier input.

“As Canberra’s population continues to grow, it is vital that we invest in our health facilities to cater for this growth – and that means being prepared with a long-term plan,” she said. 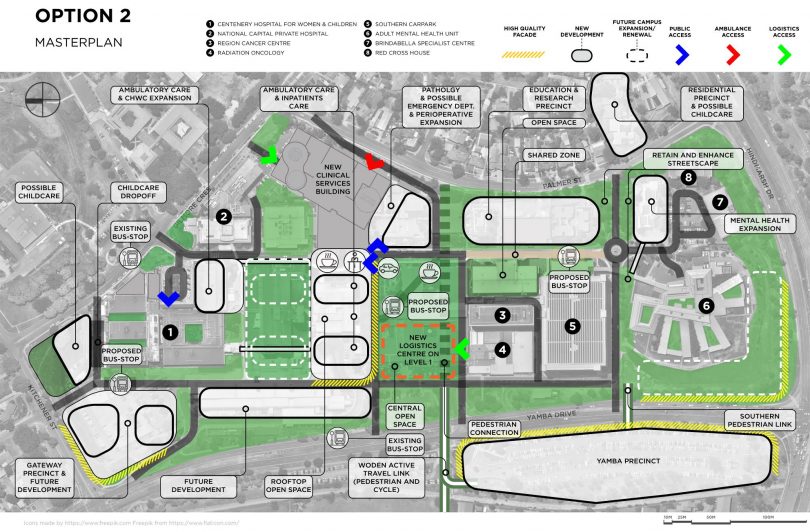 A great deal of work is already happening on the hospital campus and the government has signed the main design and construction contract with Multiplex for the long-awaited expansion project.

Nine associated projects have been completed, including a new administration building, refurbishments to buildings across the campus and the new Building 8 which houses the Sexual Health Centre, Surgical Training Centre and staff development rooms.

A temporary car park on the former Woden CIT site has also been completed, providing more than 1100 additional parking spaces that will compensate for the loss of parking during the expansion.

The final Canberra Hospital Masterplan is scheduled to be completed by the end of 2021.

The consultation will be conducted online and through a series of workshops throughout July and August.

A third of all hospital users are non ACT residents. Our hospitals should be run and funded by NSW . They seem to run a better budget.

Time more went into Calvary Hospital. It’s pathetic to drift all this money south while the Belconnen area is facing medical centre closures.
Stall light rail to Parliament and put the money into improving all PUBLIC health facilities in the North.

Janet Heap calvary is so much better then canberra

Provided you don’t need absolutely anything to do with reproductive health, because well, see that cross on the side of the building? It’s ridiculous that in this day and age that a church group gets any say in a publicly funded hospital. 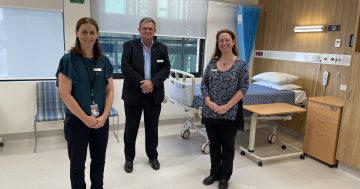 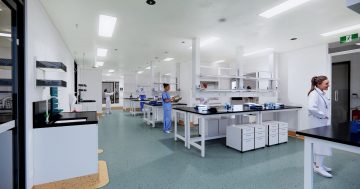