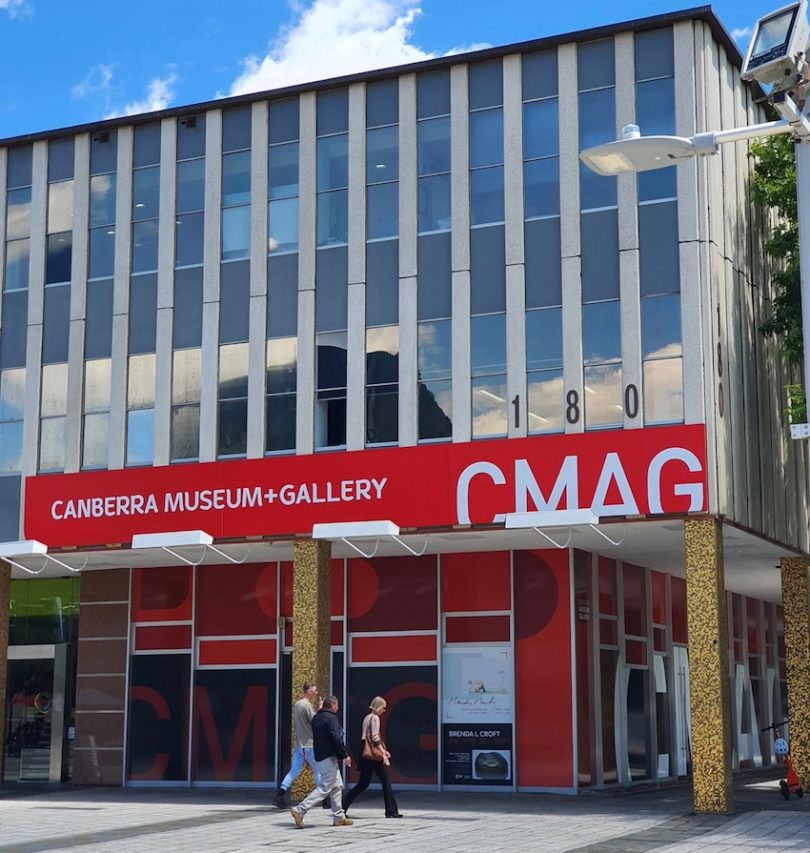 I couldn’t count the number of times I have heard this when showing locals some of the treasures within Canberra Museum and Gallery (known as CMAG), while on a Canberra Secrets tour.

This shouldn’t be a secret, because it’s been around for about 20 years, but it is so good.

Charged with being “Canberra’s gallery”, CMAG, located on London Circuit in the city centre, reveals social history and visual arts and has direct links with people and the Canberra region.

Currently, a number of exhibitions are on display within the light and airy gallery spaces. A personal favourite is the Open Collections Gallery.

Have you got a collection, something dear to your heart that you would like others to see and enjoy? Then this is your opportunity. The Open Collections Gallery is a special part of CMAG, set aside for locals to display their personal collections.

Over the years we have enjoyed many quirky and fascinating collections including vintage racing bikes, Dr Who, fashion dolls, outrageously sensational shoes and even our very own Region Media journalist Sally Hopman’s personal collection of snow domes.

Currently, the Open Collections Gallery is exhibiting objects from the Australian Federal Police (AFP) Museum for the organisation’s 40th anniversary. A commemorative quilt is centrepiece to Threads of Policing, with creative works contributed by officers on the theme of “What does AFP mean to you?”.

Not so long ago, the world was anxiously awaiting the safe but seemingly impossible rescue of 12 young soccer players and their coach, who were trapped by rising waters in the Tham Luang cave system in Thailand.

AFP assisted in that rescue in 2018 and this exhibition displays objects used by those officers during the rescue, including their wetsuits, flippers and masks. 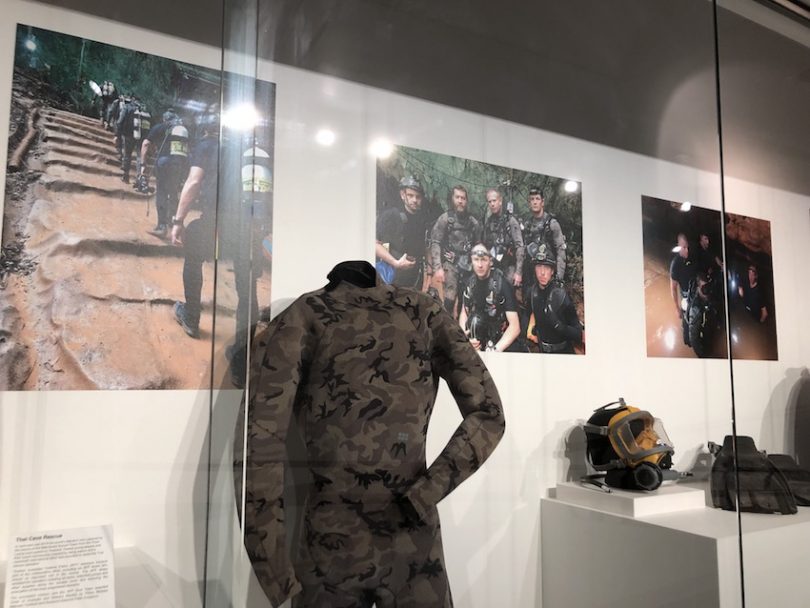 Generations of Canberrans would fondly recall Constable Kenny who also features, along with objects highlighting the intricate work of AFP detection dogs, including their doggy shoes.

Tucked upstairs is the Nolan Gallery, a true Canberra treasure.

It’s not so well known that CMAG holds more than 200 pieces by artist Sir Sidney Nolan, renowned for his paintings based on Australian folklore and events.

The National Gallery holds the Sidney Nolan Ned Kelly series gifted by Sunday Reed, but the pieces at CMAG were among Nolan’s earlier works.

Nolan gifted these paintings to the nation in 1974 and the ACT is the custodian of this Foundation Collection.

Originally housed in a purpose-built gallery at Lanyon Homestead, they were moved to the more secure galleries of CMAG after being at risk of the rapidly approaching 2003 fires.

This collection is part of an iconic group of Nolan’s paintings from 1945 to 1953. Some of Nolan’s earliest paintings from the Kelly, Burke and Wills and St Kilda series are included, as well as examples of the artist’s popular central Australian landscape and carcass works. 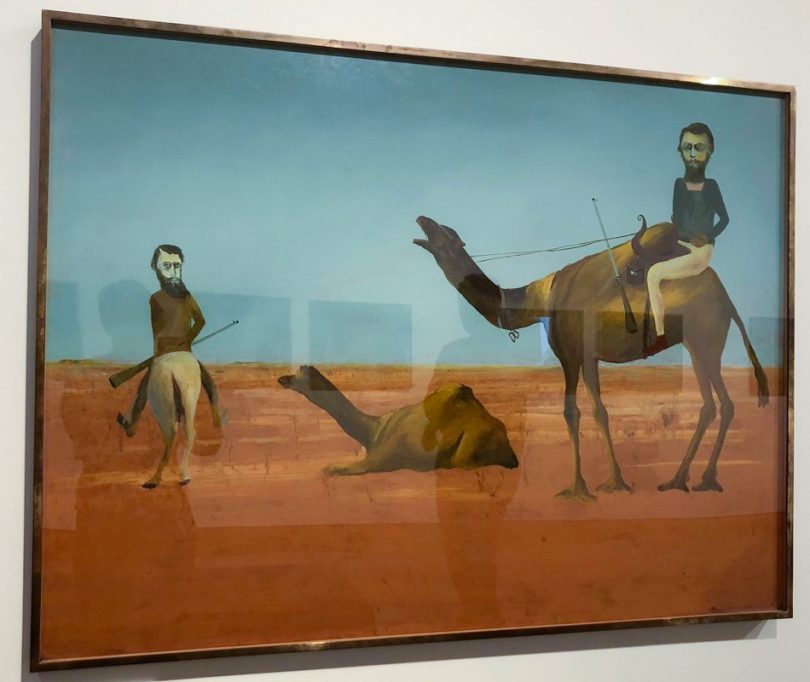 Another local link is the exhibition, Mandy Martin From Queanbeyan to New York: 1978–1984 /Art & Life.

Having moved from Adelaide to Queanbeyan in 1978, Mandy Martin was at that time an emerging artist, who become a painter, printmaker and teacher at Canberra School of Art. She went on to gain an international reputation, exhibiting her work around the world. 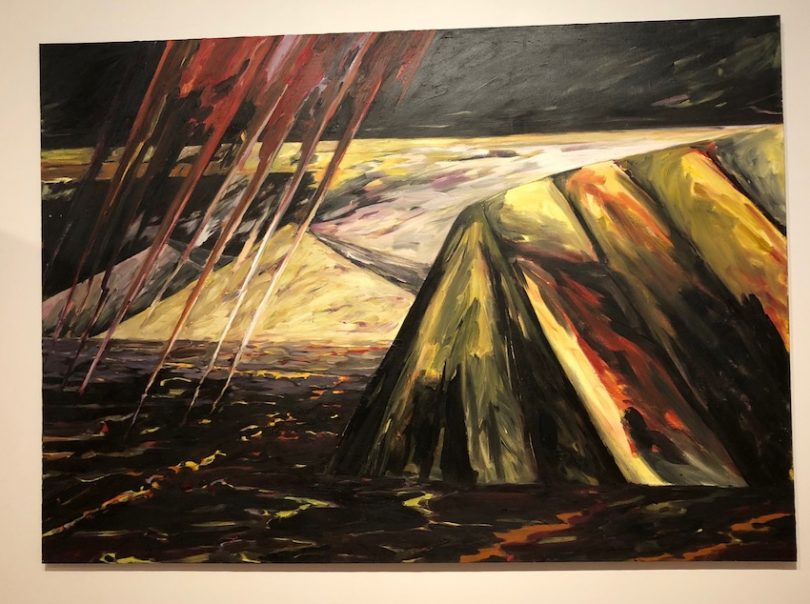 A significant commission Mandy completed in 1988 was “Red Ochre Cove” for Parliament House. This hangs in the main committee room and is three metres high and 12 metres wide. This current CMAG exhibition highlights Mandy’s earlier career and shows the evolution of her work that led to the painting of Red Ochre Cove.

Mandy Martin passed away during 2021.

Yes those focaccias are yummm

And the men’s bathroom has a bidet!!

thea - 4 minutes ago
We want more of Geoff’s work in ACT please! View
Rebecca Mosher - 2 hours ago
Such an amazing artist View
Community 93

Kris Peralta - 32 minutes ago
Jackie White I agree, but I do believe a motorsport facility would reduce antisocial behaviour in general, not just over the... View
Mathew Mendo - 34 minutes ago
Live and let live, helps the economy more than the flower show. View
Jackie White - 34 minutes ago
Brendan Twomey you are totally missing the point: hoons repeatedly say they would confine their 'hooning' to a designated are... View
Lifestyle 30

Sandra Carle - 33 minutes ago
Tasmynee Carle must get one of these... View
Business 32

Pierogi lovers of Canberra, I am the bearer of bad news. After six-and-a-bit glorious years of plump, tasty dumplings, Polo...
News 241

Following the recent storms which tore through large swathes of the Belconnen and Gungahlin region, many residents have voiced their...
News 4

For a long time, we did everything we could to avoid catching COVID-19 (lockdowns, anyone?) The reality is that many...
What's On 1

I know it’s a generalisation, but many Canberra residents appear to have an uncomfortable relationship with anything to do with...
News 241

Canberrans are frustrated with the state of the roads around town and the proliferation of potholes after months of wet...
Community 93

@the_riotact @The_RiotACT
The @acccgovau is investigating reports of #rapidantigentests being sold for "outrageous" prices. But #Canberra pharmacies say their big concern remains supply and they welcome the scrutiny https://t.co/OLkQPnSfWa (5 minutes ago)