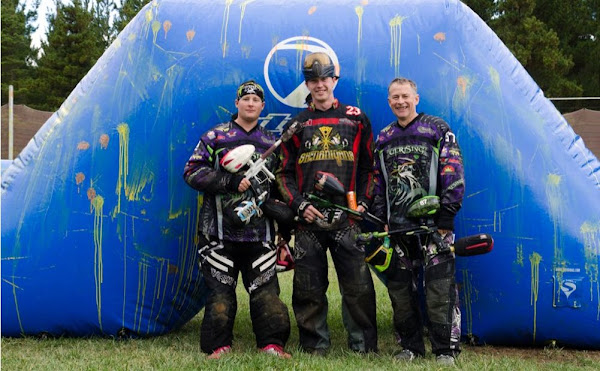 Three Canberra paintballers have earned selection in an Australian squad to play a test match against a New Zealand team in Sydney on Friday 17 May. This international match is a first for the sport in Australia.

David Turner and Mark McElligott from Canberra’s Uprising and Mitch Hackett who plays for Sydney team Shenanigans, will join 11 other players from Sydney and the Central Coast, Brisbane and Adelaide in a 14 man squad which will take part in the match at Sydney’s Action Paintball Games the day prior to Round 2 of the Australian Super 7s Tournament series in mid-May. A return match in Auckland in late August has also been discussed as a possibility.

The three had been team mates with Uprising over the last 5 years during which time the team progressed from Division 3 to Division 1 where their best result has been 2nd place in Round 3 of the 2012 Super 7s series. Hackett moved to Shenanigans this year after the team stepped up from Division 2. The teams have a long history of friendly rivalry with Shenanigans most recently edging out Uprising for 3rd place In Round 1 of the Super 7s in February this year.

All three have previously played for the ACT in the Super 7s annual State of Origin series, which like the coming international, follows a 10 man format. They are looking forward to playing with a number of players that til now have been opponents and to the hectic pace of the 10 man game. They hope that this match will be the start of an increased profile for the sport on both sides of the Tasman.

The result of the test match and of the Super 7s event on 18/19 May can be followed up at either
https://www.facebook.com/super7spaintball?fref=ts or http://www.super7spaintball.com.

Lin Van Oevelen - 5 minutes ago
John Moulis The cause of the fires was said to be the fast growing grass and undergrowth because of more rain, so that does s... View
Capital Retro - 4 hours ago
Lets debunk this notion now that climate changed was the cause of the 2019 - 2020 fires. The Ororral Valley fire was ignited... View
John Moulis - 4 hours ago
I'm reluctant to believe this. 1974/75 and 1975/76 were La Nina years. I remember being in Forster in January 1976 and it rai... View
Opinion 50

Andrew Dale - 8 minutes ago
A 1 bedroom apartment is all you will get for 350k View
Julie Macklin - 9 minutes ago
Unless a person has a very good income, or have inherited money, they should not be looking at a $700,000 house as their firs... View
Andrew Dale - 1 hour ago
Julie Maynard I know. Heaps do now. But as I said the next generation bugger all will be able to do it on their own View
Food & Wine 29

Lynn Stape - 2 hours ago
agreed... I couldnt think of much worse than cleaning in a hospital at the moment... talk about front line staff.... View
Food & Wine 30

Mel Casao - 5 hours ago
Kevin Lo What ya think of this place? View
Luke Evans - 10 hours ago
Lisa Black I'll be in on that View
Kirrilly McKenzie - 10 hours ago
Anita Patel amazing! Terima kasih!!!! View
Property 56

Capital Retro - 5 hours ago
Volvo said in 2017 that this would happen in 2019. They are probably just virtue signaling. Meanwhile, their Polestar EV JV c... View
Simon Azzopardi - 7 hours ago
Very soon they will have no choice as EVs take over! Better get it sorted now rather than leave it to later.. View
Robert Azzopardi - 8 hours ago
Being on the EC side of things I congratulate the owners of IQ for allowing this project to proceed. I’m hopeful that other... View
News 82

Alan Hopkins - 6 hours ago
do you use the roads? last time I checked they weren't funded by the end user. Btw if you pay so much in rates perhaps you sh... View
Adrian Glamorgan - 9 hours ago
interesting thought View
Adrian Glamorgan - 9 hours ago
You benefit by having a city that isn't as clogged up with cars as it would be if a light rail didn't exist. "User pays" is t... View
Opinion 3

Residents at IQ Smart Apartments in Braddon say the installation of electric vehicle (EV) chargers in their basement carpark is...
Opinion 50

The ACT Greens have been on cloud nine for the past week but now it's time to come down to...
Food & Wine 30

A short menu that’s long on authentic flavours is a winner in any language. A handful of traditional dishes interspersed...
Food & Wine 29

@The_RiotACT @The_RiotACT
The January storms may be a sign of future disasters, but even now, 67,000 ACT households may be unprepared for storms this summer https://t.co/B9i7abgx1Y (1 hour ago)

@The_RiotACT @The_RiotACT
Unlike 'big golf', pitch and putt isn't a good walk spoiled and holes in one are common. It's a wonder this small game isn't a bigger hit https://t.co/dvEIDD8JOT (2 hours ago)