Canberra pays its respects for the French victims 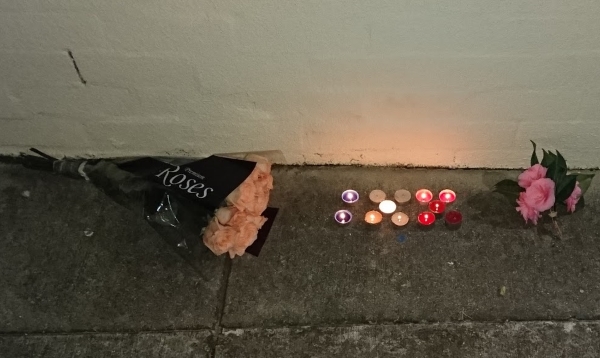 As I pulled up to the car park opposite the French Embassy in Canberra on the weekend, a lone figure was visible huddled on the grass, holding a candle and apparently deep in thought as they didn’t even look up as I pulled in. As I hopped out, it was another quiet and peaceful night in Canberra, across the world in France though an entire country is in mourning.

Although they declined to be photographed or interviewed, it was touching to see a solitary figure keeping watch outside the Embassy, giving hope to those who are shocked by the events in France on Friday.

Some candles and two lots of flowers had been placed next to the main gate just outside the security booth. I spoke with one of the guards present who told me a few people had come and gone during the day to pay their respects to the French fallen. He advised me to expect a more formal memorial during the week. It is horrific to imagine how a sole vehicle could kill over 80 people and maim many more in such a short space of time. Seeing that truck barreling towards you in the crowd must have been a terrifying sight indeed for those present.

It is a somber reminder that those who wish to harm others in the name of religion will use any and all means at their disposal, including one of the most deadly weapons we all take for granted every day, the common motor vehicle.

What can be done to prevent attacks like this? Sadly nothing more than rooting out and stamping out extremism in all its forms. We must all condemn killing in the name of God, no God would truly ever condone the slaughter of his/her children in their name.

Let us all take a moment of silence as you read this to reflect on the families and friends in France who are at this moment grieving for their loved ones, when what was meant to be a day of celebration turned into a day they will now never forget for the rest of their lives, for all the wrong reasons.