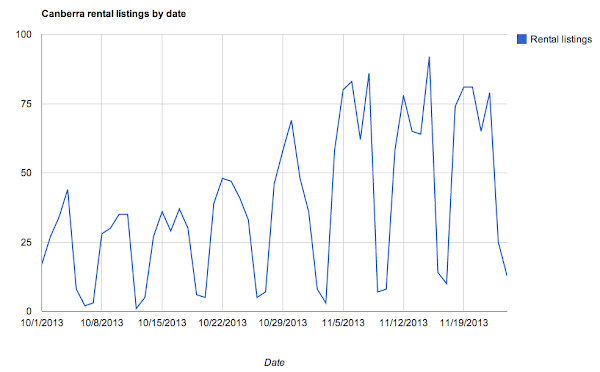 We realise it’s not a perfect metric. But suspect it might be an interesting one to track over time.

Allhomes have a page which tells one the number of rental listings they’ve had for a given date.

And I’ve started plugging each day into a spreadsheet which in turn yields the above graph. We’ll update weekly.

It’s worth noting that at this time of year a lot of students are leaving town.

And Canberra’s recession has barely begun.

An interesting note is that some listings are for multiple units, like currently for Axis in Lyneham, this urban Ghetto was built super quick and put 300+ units onto the market at one time in one location, 24months later there are still vacancies. But Real estate agents don’t want to put 120+ listings out so they put a generic ad or cross advertise from equerries. It is however very interesting to see such fluctuations over a relatively short time.

I know there is real value in the market at the moment and I recommend people can negotiate down on advertised rental prices. Get a good deal while you can, god knows you wont be given any favours if the market changes.

What’s the go with the sharp drop offs? That has to be advertising renewal or the like. It’s not like 80 properties are rented one week and then another 80 come on the market the next day.

The dropoffs are the weekends. it’s new listings going on the market each day.

I’m certain I never said there was more work in it for you (significantly less than you’re doing now, really).
Allhomes ought to be able to provide it to you incredibly easily.

(If they can’t, they have major enterprise data problems. If they won’t, then they’re just arseholes who don’t recognise opportunities to partner their free advertising into a curated content steam)

why the US-style date format?

US style data formatting for my US based spreadsheet.

As for total listings as of this morning it’s 2350. I’ll log those weekly when I do this up.

For those interested, SQM Research provide really excellent and free charts showing both the vacancy rate and number of vacancies by region, which go back to 2005.

There’s been a clear and consistent ramping up in the number of available rentals since early 2012 (increasing from around 300 vacancies to around 1200 now, doubling the rental vacancy rate from just shy of 1% to more than 2% now).

It really shows how appallingly bad the years prior to 2008 were, when vacancies were sub 100 and the vacancy rate was maybe 0.2%.

A vacancy rate of 3%+ is what is generally considered to be a healthy rental market, which shows the level of policy failure by the ACT government over the last decade.

Simple daily geographic aggregates, assembled from indirect manual data entry, being performed by a publishing editor, who copies from an outward facing website, provided by a client who owns the OLTP source directly?
Lawks. This isn’t 1975.

Arrange a daily output direct from the supplier.
(hint: In your current scenario only the first and last bits are relevant if you have an established relationship)

PS: Allhomes is merely one source in a competitive market allowing rental ads , so the quality of your facts are subject to any change in their market share.

Yes I could do a vast amount more work and only add more uncertainty.

Or we can have a simple little metric that lasts while it lasts.

There are some real bargains out there for both rent and purchase right now. It’s not a bad time to be looking.

We have a couple of properties on the market for rent at the moment and there is definitley an over supply at present – we are asking for rent lower than we were receiving three years ago and still not getting much interest!

Linda Gee - 43 minutes ago
Jeez, that's not good. 😥 View
Meg Redmond - 50 minutes ago
I’m not sure it is Linda Gee he is struggling to get one at 4000.00 showed available to me yesterday he tried to book it an... View
Linda Gee - 2 hours ago
Good news for you Alex Suter Redmond . View
Opinion 21

Capital Retro - 11 hours ago
Violent home invasions targeting keys for owners' luxury cars are now out of control in Canberra. Very few details are subjec... View
Daniel Lesky - 13 hours ago
Jason Malcolm could be worse not like she needs to go to charnwood View
Lisa LaMaitre - 16 hours ago
No-one pays attention to crime in Canberra until it impacts them! We closed a Gungahlin based business over 10 years ago afte... View
Lifestyle 1