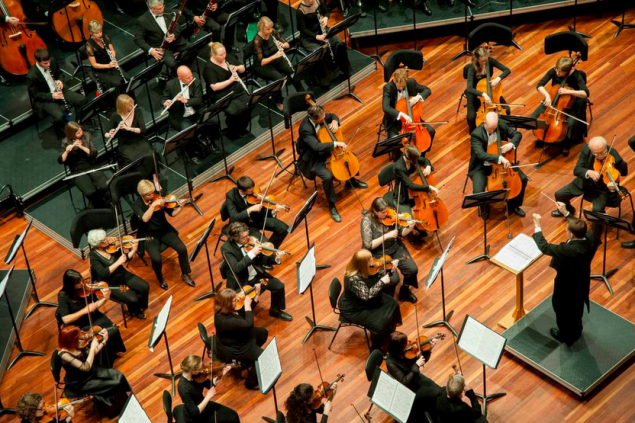 The Canberra Symphony Orchestra returns to the concert hall for the first Llewellyn Series in 2015 to pay tribute to Finnish composer Sibelius on the occasion of his 150th anniversary.

Conducted by the CSO’s Chief Conductor and Artistic Director, Dr Nicholas Milton, the evening will feature a program of celebrated works including Sibelius’ Symphony No. 5, one of the most beloved works in the symphonic canon.

“There is no question that it is enormously challenging to play, yet musicians love to perform it, and audiences love to hear it,” Dr Milton said.

“For me, this is one of his most fascinating compositions. This symphony is the work in which he most successfully forged a new direction in terms of structure, and is one of the composer’s most distinctive and unusual compositions.”

This concert is supported by the Embassy of Finland in celebration of the 150th anniversary of Sibelius’ birth.

Currently studying at the University of the Arts in Berlin, 24-year-old Edward King says he has a deep connection with the technically demanding piece.

“Dvorák is a really special concerto to perform for every cellist. Until the 20th century, only a handful of cello concertos were written, as the cello wasn’t really considered to be a solo instrument in the same way the violin and piano were.”

“I’m very excited that this will be my first orchestral performance in Australia, and am thrilled to be performing with the Canberra Symphony Orchestra,” he said.

Tickets are available from cso.org.au.

Dom Polegubic - 7 minutes ago
This is a good link to an intro to Croatian wines: https://winefolly.com/deep-dive/introduction-to-croatian-wines/... View
Opinion 11

Deepak Ramanath - 28 minutes ago
James Forge Wow, where is this? View
James Forge - 29 minutes ago
Deepak Ramanath the government is about to demolish an overpass and replace it with yet another set of traffic lights View
Kylie Wylie - 57 minutes ago
Residents of Lyons suffer badly every work day. Every main road is gridlocked with rat runners that mostly won't even let oth... View
Opinion 189

Alex Dee - 32 minutes ago
You need to get out more. View
Francesco Merlino - 39 minutes ago
Alex Dee Alex Dee I hope you are right! View
circe64 - 2 hours ago
There is a road going into Gungahlin where 90% of drivers clearly show they don't read road signs. They drive 60 in a clearly... View
Lifestyle 2

inverted63 - 38 minutes ago
Oh dear. ...Makes accusations about made up statistics & then cites a total of 3 successful female artists across a whole ind... View
Breaking 1

Shay Daisy - 49 minutes ago
So sad. Please everyone be careful out there. Be patient, observant and kind so we can all be safe. View
Breaking 11

@The_RiotACT @The_RiotACT
Canberra's surging house prices mean couples are taking longer to save for a deposit, and are being forced to lower their aspirations, according to a new report https://t.co/DmpeMwLcDP (47 minutes ago)