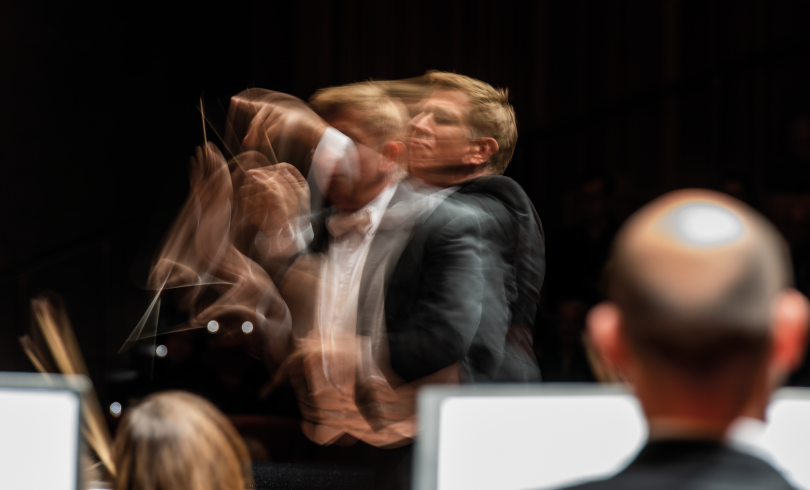 There’s not an obvious connection between classical music and jukebox music, but the Canberra Symphony Orchestra is breaking new ground at their February 15 Fundraising dinner. Conductor Nicholas Milton says that the musicians are limbering up to play “a wide range of music” at the dinner, are taking requests and are ready for anything.

“People have a chance to get involved in the joy we have in performing different musical styles and we’re going to have a bit of fun”, says Milton. “It will be an interactive experience where people discover how it sounds when the musicians experiment and mix things up”.

Milton’s keeping his cards close to his chest about how this will all work (presumably you can’t just request Beethoven’s Fifth with the entrees), but beyond the fun, there’s a very serious purpose in raising funds for the CSO’s community work and investment in growing young musicians.

The Kingsland resident artists programme was launched last year as the result of a generous donation and Milton says it’s unique in Australia. “We bring these developing artists into the orchestra, but we also give them an avenue into a profession, working in the organisation on community activities, initiatives for new venues, perhaps starting a series”.

“It’s a way to figure out what it means to be a professional musician. The reality is that musicians who want to make a living need a job in an orchestra. They need to teach, start their own musical series, think flexibly about how to make it work, and that’s what our programme is focussed on.

Milton says that the two young professional musicians who joined the programme initially have blossomed in ways the CSO never anticipated, adding that while other orchestras have performance fellowships, the CSO is unique in adding mentoring and teaching experience. “We are training people who will eventually head a school of music”, he says. “We hope they’ll start their own orchestras and ventures – this is an investment in the future of music in Canberra”.

The CSO has an active education programme that brings musicians and ensembles into schools, so they can interact with the students and is focussed on expanding that offering to bring the experience of live music to as many kids as possible.

The orchestra collaborates on the Painting with Parkinson’s project, pairing musicians, artists and Parkinson’s sufferers, and also visits special schools throughout Canberra and the region. “Speaking with teachers afterwards and hearing how astonished they are at the effect music has on these children is extraordinary”, Milton says. “The teachers well up with tears when they explain what it did for the kids”.

He says that for musicians, the experience of playing for a child with special needs, or a patient with a major illness can be heart-wrenching. “The response from a child placing their hand on the back of a cello drawing an open C is just as powerful as sitting in a concert audience, listening to Mahler”.

The CSO also has an instrument fund and encourages people to support a particular chair sponsorship. “We are not supported to the same extent as other orchestras, but our amount of activity is comparable”, Milton says while explaining how important it is for the CSO to consolidate and support their financial base.

Receiving substantially less funding than any other Australian symphony orchestra despite having strong community support, the CSO needs to be deft with its fundraising to keep the venture afloat. By contrast, the Tasmanian Symphony Orchestra, with a similar population base, receives around $5 million each year from the Federal government.

The CSO Fundraising dinner will be held on Friday 15 February at the National Museum. Tickets are $150, or $1,400 for a table of 10. Click here for further information.

Ian Fraser - 3 minutes ago
Yes, that's how they're generally referred to and you won't go wrong by doing so. Bear in mind though that Eastern Water Drag... View
News 20

Linda Stapleton - 7 minutes ago
Hans Dimpel I will await the inquiry into the inquiry of the inquiry, before making up my mind. View
Linda Stapleton - 10 minutes ago
Might I suggest that the review can come up with what ever opinion they choose, but the opinion of voters is more important.... View
Robert Cox - 2 hours ago
"...it was overall an effective way to have stimulated the ACT’s post-lockdown economy" is an odd way to define "inconclusi... View
Community 29

Ben Phillips - 43 minutes ago
There’s about 20 acres sitting unused next to Lyneham primary. Mixing in some high density housing (units) with community p... View
Jenny Lawrence - 58 minutes ago
Joshua F. Johnson any form they take, including the current one, closes off some uses - that's not an argument not to conside... View
Joshua F. Johnson - 1 hour ago
Jenny Lawrence they’re not “ovals” they’re just open outdoor spaces. You might want a pool there. You want want the D... View
News 2