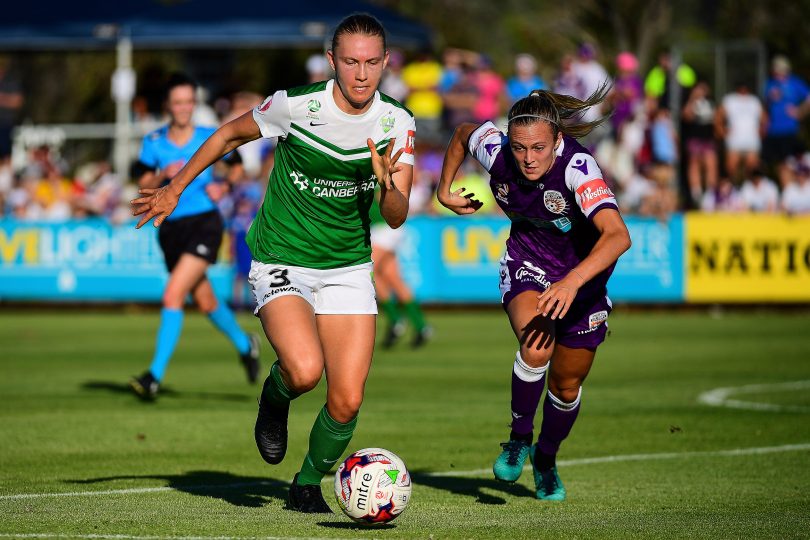 Clare Hunt could be sidelined up to 12 months with ACL injury. Photo: Supplied by Canberra United.

Canberra United defender Clare Hunt has been diagnosed with a torn anterior-cruciate ligament after suffering the injury in a non-contact training incident earlier this week.

She is expected to be on the sidelines for up to 12 months and will most likely miss the start of next season.

She will also miss the winter season with Sydney University, where she was expected to play under Canberra United assistant coach Alex Epakis.

The 18-year-old defender has played in seven of United’s 11 matches this season and had proven herself to be an important player for the team.

Head coach Heather Garriock said that the injury is a blow to Hunt and the team, but she is confident Hunt will come back stronger.

“Clare is a quality player with so much potential, and I know this will just be a small setback in a long career,” Garriock said.

“She came through some injury issues prior to this season and has performed at an excellent level so far.”

“Myself and the club wish her all the best in her recovery and Clare knows she has the full support of everyone at Canberra United during this time.”

phydeaux - 3 hours ago
Rather my point, JS9. “…without qualification”. With significantly different individual circumstances, to give an answe... View
Kathy Blunden - 4 hours ago
I was also totally shocked with my electricity bill. It is the highest bill I have ever received and I have solar panels!!!... View
JS9 - 4 hours ago
It is a weighted average across a range of plans - so it means some will go up more, some go up less. Over the basket of plan... View
News 12

@the_riotact @The_RiotACT
The ACT Government's restrictions on #retail and #hospitality trade have caused devastating damage to the sector, says the @CanberraLibs' Shadow Minister for Business, Leanne Castley https://t.co/mbDUXSRY5x (59 minutes ago)