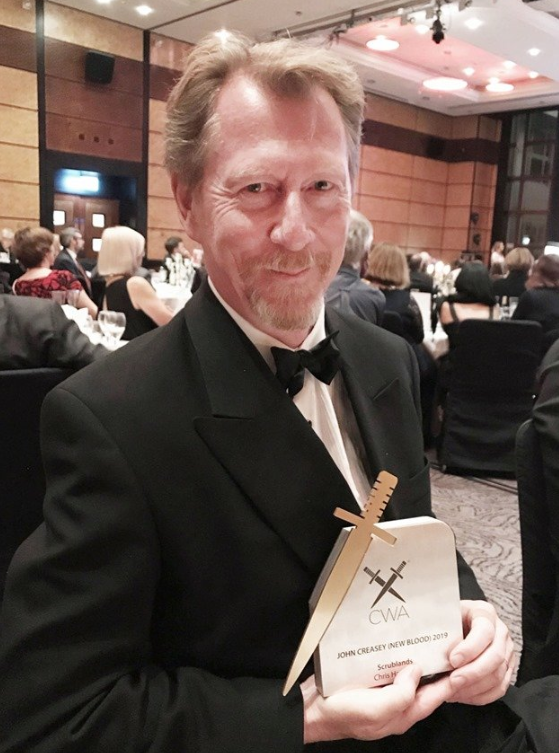 The growing genre of Australian noir has been recognised internationally, with two Aussies winning daggers at the prestigious Crime Writers’ Associations (CWA) Awards in London.

Hammer’s debut crime-fiction novel Scrublands follows the story of journalist Martin Scarsden’s investigation into a mass murder in a drought-stricken, rural Australian town. Hammer says there was little to no market for Australian crime novels a few years ago, but that’s all starting to change.

“For Scrublands to be selected from the best debut from around the English-speaking world is a great compliment,” says Hammer. “I was just hoping to get it published in Australia. I still can’t believe it’s being published in the UK and the US, as well as in translation.”

Burr’s ‘drought noir’, rural crime manuscript is a tale about Mina McCreery, who has struggled growing up in the shadow of her twin sister Evelyn, who disappeared 20 years earlier.

With a case that intrigued the media for years, and invited conspiracy theories from amateur sleuths indicting Mina for the murder of her sister, private investigator Lane Holland decides to reopen the case in a move that could endanger them both.

Both stories take a community-centric approach that puts the uniqueness of a drought-stricken Australian outback front and centre. The harsh and unforgiving landscapes create an inimitability around small-town criminal intrigue that takes readers away from the familiarity of city life.

“Many Australians cherish the bush; it’s part of our national identity,” Hammer wrote in a Crime Reads blog about the emergence of ‘outback’ noir. “In recent times, life seems to have become more fragile, more marginal, with a series of droughts, a crisis in the river system and devastating bushfires.

“There is an understanding that climate change is real and threatens the traditional life of our farmers. I suspect some of us have picked up on that, either consciously or unconsciously, and realised what a great setting it makes for a crime book.”

Although Hammer was a press gallery veteran, reported for SBS on six continents, and became the Fairfax online political editor, he says he drew inspiration from his career but insists that his writing isn’t a projection of his life.

“Martin is not autobiographical, but I certainly met journalists like him in my travels [who were] suffering from PTSD and/or unable to sustain relationships.”

Why is Aussie noir becoming an international phenomenon? Hammer attributes the apparent preponderance of books set in country towns in part to an American romanticisation of antipodean culture.

“I think for many Americans, Australia is simultaneously familiar and exotic. You see us almost as cousins, with a similar history, culture and language.

“There is something in an Australian country town that evokes thoughts of American towns, and in the outback some echo of the wild west.

“I have met many Americans who hold an almost nostalgic view of Australia, even those who have never been here; they see it as a more innocent version of the US, like America used to be.”

The CWA’s Daggers have been synonymous with quality crime writing for over 50 years with 10 Daggers awarded annually for excellence in crime literature.

Scrublands was a brilliant book

Have that to read

Just picked up a signed copy of Silver, didn't know he was a local! Look forward to reading it.

Karen can I bags it after you?