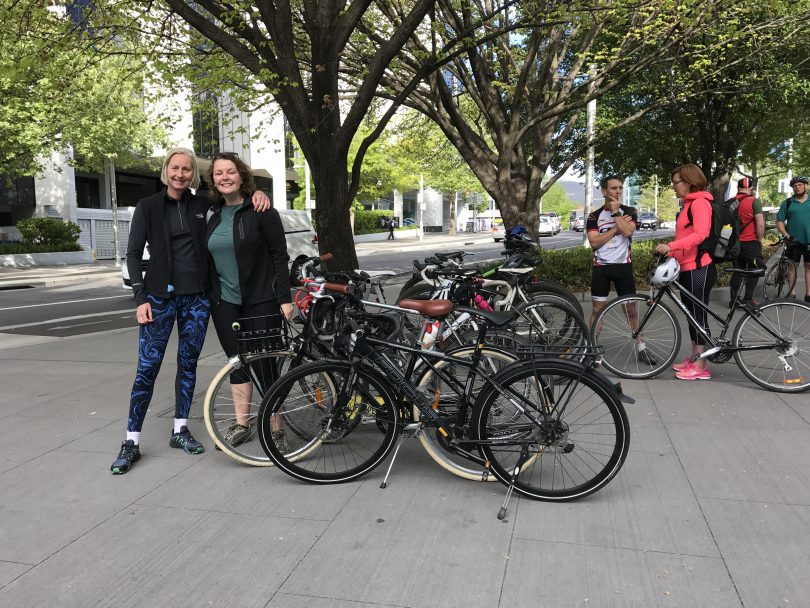 Lillian Mellink and Femke Withag from the Embassy of the Netherlands in Australia at the Ride2Work Day breakfast in Civic.

Wednesday 18 October was National Ride2Work Day 2017, and hundreds of Canberrans who regularly ride their bikes to work celebrated with a breakfast in Civic.

Proportionally, more people in the ACT ride bikes for transport than any other place in Australia, making Canberrans some of the healthiest commuters in the nation.

“Riding to work regularly is an excellent way to get incidental exercise and avoid traffic congestion,” he said.

Pedal Power ACT and the ACT Heart Foundation encouraged commuters to ride their bikes to work on Wednesday, induced by the reward of breakfast at a number of locations around Canberra, including Civic, Dickson, and APH.

Minister for Health and Transport Meegan Fitzharris dropped into the breakfast in Civic on her bike – which she brought part of the way on the bus.

“I set off on my bike but had a seat problem, so I made the decision to put my bike on a bus for the rest of the trip,” she explained, in a practical demonstration of how Canberra’s integrated transport network can help commuters. 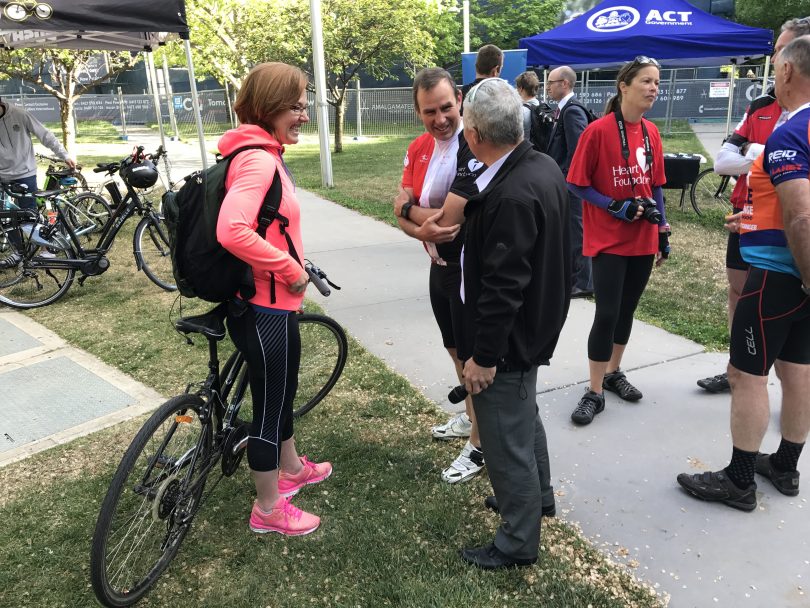 “Ride to Work Day is a reminder to all Canberrans to get out and about and be part of the active living movement that integrates physical activities into our daily routine. Bike riding is a fantastic way to do this,” said the Heart Foundation CEO Tony Stubbs.

“Just 30 minutes of moderate physical activity on most days is an important way to prevent heart and cardiovascular disease.”

“Here in this beautiful city of ours, we have so many opportunities to get out and about and do this.”

“I am really pleased to work with Pedal Power on this initiative towards improving heart health in Canberra, especially as cardiovascular disease affects one in three Canberrans.”

The Ride2Work Day breakfast is a chance to give regular bike commuters a pat on the back, and an opportunity to encourage others who might like to give riding to work a go.

Pedal Power ACT also used the breakfast as an opportunity to spread the word about their ride-to-work program, Cycle Works. People who ride their bikes to work, or would like to try, are encouraged to visit www.cycle-works.com.au to sign up and participate in a month-long personal challenge during November.

Do you ride your bike to work? If not, what are the impediments to riding to work in the ACT?

Anne Treasure is the Communications Manager for Pedal Power ACT. She writes on bike riding in the ACT from the perspective of someone who rides mainly for transport.

Rob Long - 13 minutes ago
The Nelson legacy, the liberal wrecking of the AWM. He systematically wrecked the joint. View
Timothy Bailey - 6 hours ago
The AWM and "ANZAC" are very powerful icons. Difficult to argue with or question. The whole 'Beersheba - last great cavalry c... View
BlowMeDown - 11 hours ago
I think you've just summarised the Labor/Greens strategy re promoting light rail by derailing, as they did, the bus system in... View
Community 30

retep - 31 minutes ago
Applause. Thanks for your efforts. We too try to alleviate our energy use in similar ways. Also agree with your observations... View
HiddenDragon - 2 hours ago
Canberrans (particularly those without the income of a professor or an MLA) who are still absorbing the recent news about a b... View
jwinston - 3 hours ago
Jeez Chewy - I never picked you as a Tim Flannery fan boy? View
News 3

Paul Leins - 51 minutes ago
Chinmoy Misra so you're saying *you* can't maintain a reasonable speed in built up areas without some kind of ridiculous urba... View
Jeff Shapiro - 1 hour ago
Ken Owers you need an idrive adapter or buy a Mercedes View
Chinmoy Misra - 1 hour ago
Paul Leins Congratulations. You missed the point entirely.... View
Business 63

assiduous - 1 hour ago
A scheme like this is akin to rearranging the deck chairs on the titanic, as opposed to meaningful reforms, planning and infr... View
Ann-Maree Jacobs - 3 hours ago
Four tries every time The site is down ! View
Community 4

@The_RiotACT @The_RiotACT
Gungahlin is often seen as the new part of Canberra, but some locals have lived their whole lives there. The town centre is already big and it's still growing https://t.co/Kqq2xR1Mmm (48 minutes ago)