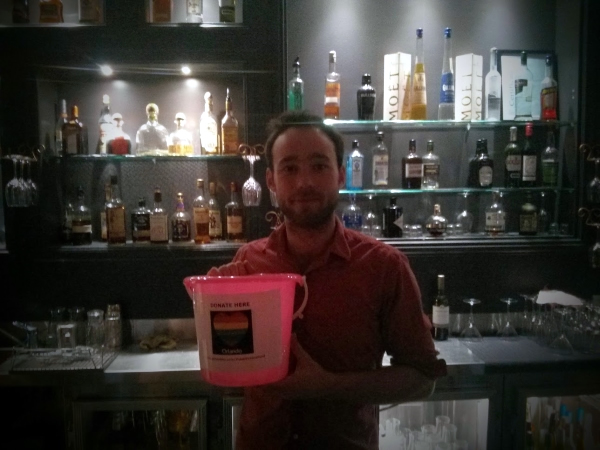 16West held a memorial gathering this week to honour the victims of the Pulse Nightclub shooting in Orlando, Florida, and to give the community a space to come together in to discuss the impact of the event and show solidarity with the LGBTQI community especially in Orlando.

I spoke with Lynne O’Brien, co-owner of 16West (along with Kim Ware) about the events in Orlando. Lynne said she was devastated when she first heard the news. She has heard from a number of people who say that it makes them really angry, but at the same time determined that events like this will not deter any of us from being who we are or affect how we party.

Donations were being collected during the evening (Wednesday Karaoke was on as usual too), to be passed on to the official Pulse Victims Fund being administered by Equality Florida to raise funds for the families of the victims.

Henry said that it was wonderful to see the community come together and donate to support the victims. He said that it demonstrated the need to connect with others in the community on a personal level after events like this, and to express our solidarity with each other and the LGBTQI communities worldwide.

Overall just shy of $400 was raised on the night for the Pulse Victims Fund, with around 60 people in attendance between 7:30 and 11pm.

As a Queer person myself, I can say personally that I am very glad to have a venue like 16West in Canberra and a space to come together and be among the community, especially in times like this, and it was gratifying to see so much money raised from not very many people. Overall the current fund total stands at $4,370,595 (USD), compared to that $400 may not seem like much, but that $4.4 million has been raised from events exactly like this held around the world since the shooting occurred, from the pockets of LGBTQI community members worldwide.

It is this generosity of spirit that helps me deal with events like Orlando, knowing that for every insane murderous asshole in the world (forgive my language but I really can’t put it any nicer than that) there are thousands more people who are kind, caring, loving and compassionate. That’s what enables me to get out of bed every day, even in the face of such overwhelming violence directed at a community that I am proud to be part of.

I did email Charlotte with the correction but I think theres been some technical issues on the backend this week which made it harder to make this change. Seems fixed now with all the new articles appearing today. Feel free to edit in the change I emailed you if you still get the chance Charlotte, thanks.