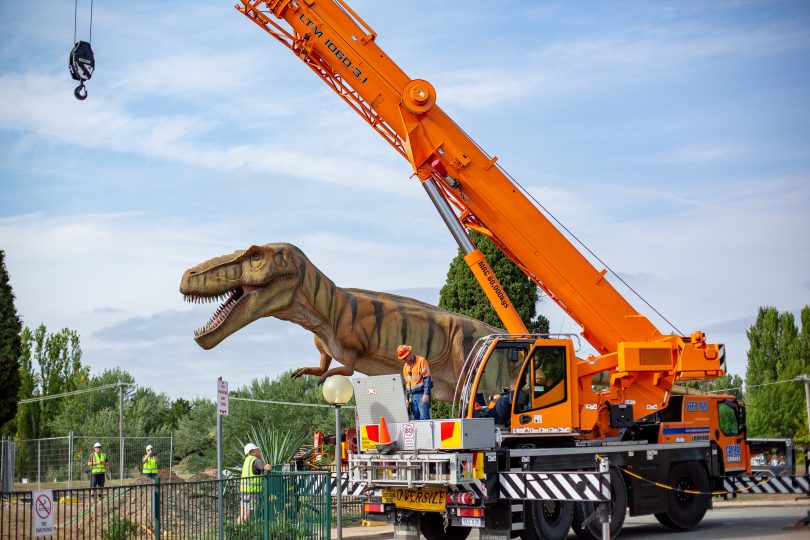 Tyrannosaurus Rex didn’t have feathers or wings when it roamed the earth millions of years ago, but Canberra’s own T-rex took flight (with the aid of a crane) at the Dinosaur Museum this morning.

Development forced the Canberra Dinosaur Museum to relocate the giant figure: museum manager David Barker explains that civil works for the construction of a nearby service station meant the dinosaur’s current prominent position was no longer suitable.

“We’ve moved it a bit closer to the museum and we’ve had to cut down the size of the garden there and develop another part of the site. We’re looking to expand into a new adventure dinosaur garden on the other,” he said. 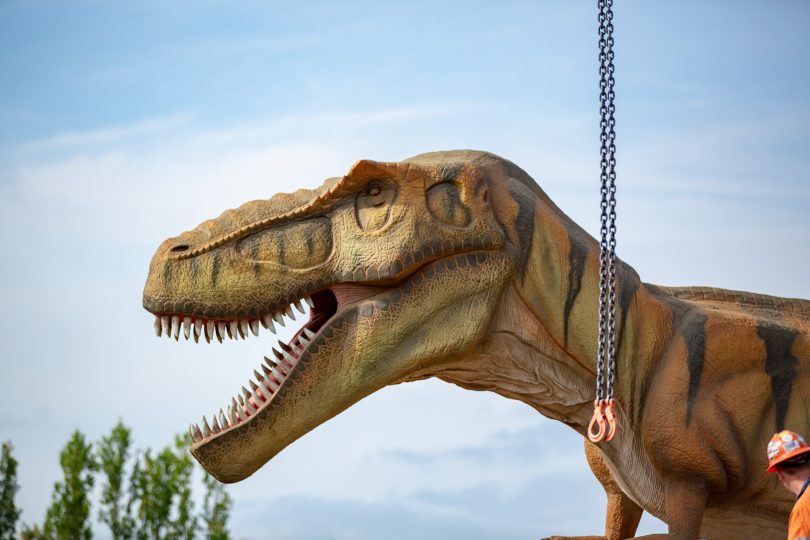 The tyrannosaurus is made of rubber latex and larger than life. Photo: G. Tsotsos.

The Museum’s T-rex is in fact considerably larger than life at 20m long and 6m high. By all accounts, the original species was around 12m long and 3.5m in height and also, not made of rubber latex.

But it’s still no easy task to move a creature of this size without damage, as David Barker explains. “A fair bit of planning has gone into it. Our builder, Jeff Horn has been working on this project for several weeks. He’s laid the footings and made sure the landing will be smooth.

“It took a 60-tonne crane to move the dinosaur but that’s happened pretty smoothly and she’s landed safely and in one piece,” he said.

The Tyrannosaurus will form part of the developing dinosaur adventure garden, which Barker says is a place for kids to explore and have more interactivity with the lifelike rubber and fibreglass dinosaur models. That’s being planned and developed over the next few months. 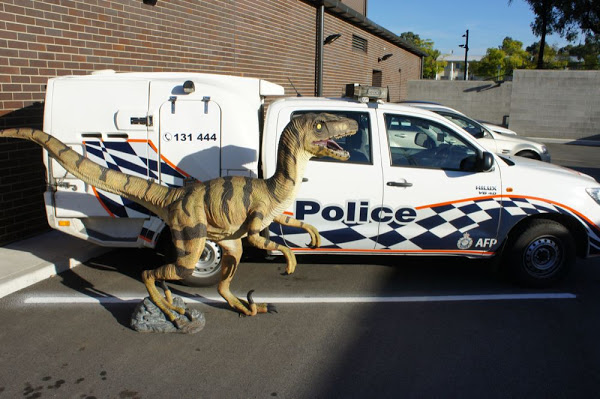 The stolen Utahraptor was eventually discovered by police in Page. File photo.

The site is also now more secure after an infamous incident several years ago when a fibreglass Utahraptor was stolen and eventually recovered from a sunroom in Page after a three-day police operation. A special response unit retrieved the dinosaur and transported it to the Belconnen Police Station after a tip-off from a member of the public.

Fencing around the garden has now been secured, following a further incident in 2017. Mr Barker says the Museum continues to enjoy strong patronage and is looking forward to completing their adventure garden development.

Jane Holzapfel Erin's true love. She still sometimes expresses anger at me for not bringing the 'disaur bot' home with us 😂

Jack Breedon more reason for you to come visit ;)

Jack Breedon you can visit us too 🤗

Gina have you taken P to the Dinosaur Museum?

Yes, he LOVED it! We should probably go back soon 😂😂

Shannon did you see!?

Ah! I thought they were cleaning it! But yeah!

Why does Gold Creek need a 2nd petrol station?

Rebecca Smith great question? Why just why? The intersection is going to be a nightmare

Rachel Barton Especially since there are no lights there.

Brad Flnt Jessica Donaldson we will take you and Katie here when you come to visit! It’s pretty cool.

Is this the one?

Jeremy Maher this explains it!... 😘

So that's what all that fencing was about! I wondered.

George Watling - 33 minutes ago
A recent OECD review of 300 Urban Planning studies from across the world has demonstrated that increasing the compactness of... View
George Watling - 1 hour ago
This story is not based on evidence or research. Higher density planning policies have been driving up property prices around... View
chewy14 - 4 hours ago
BJ, $2500 in rates is a block value of around $340000, you aren't talking a cheap piece of property. The rates are set based... View
News 1

chewy14 - 3 hours ago
And the m9ney is going to be completely used up in one day. Honestly, this is beyond a joke how incompetent the ACT governmen... View
Community 5

JC - 7 hours ago
Depends how you define better. Again hindsite is wonderful. But those who did get in early wouldn’t have agreed with you if... View
JC - 7 hours ago
Supply has been the issue since day dot. What annoys me is how the federal government has spun it all. The issue was they bac... View
News 7

Hoppingmad - 7 hours ago
I can’t help but agree with those who have pointed out that Liberals talking education, when they pump money into independe... View
Food & Wine 21

@The_RiotACT @The_RiotACT
Photographer Sammy Hawker's engagement with the environment has created beautiful images that use salt water, rain and earth to evoke a changing world https://t.co/9oVmYTwl62 (3 hours ago)

@The_RiotACT @The_RiotACT
Loveable goofball Rocco and sweet rabbit Waffle are waiting to find their perfect match. Think that could be you? @rspcaact #PetsoftheWeek https://t.co/RqlUzgo7Dg (4 hours ago)

@The_RiotACT @The_RiotACT
The owner-builder of this dream home designed it for his family. He thought of everything, down to the last detail - and it shows https://t.co/HCmMwgOhgf (5 hours ago)