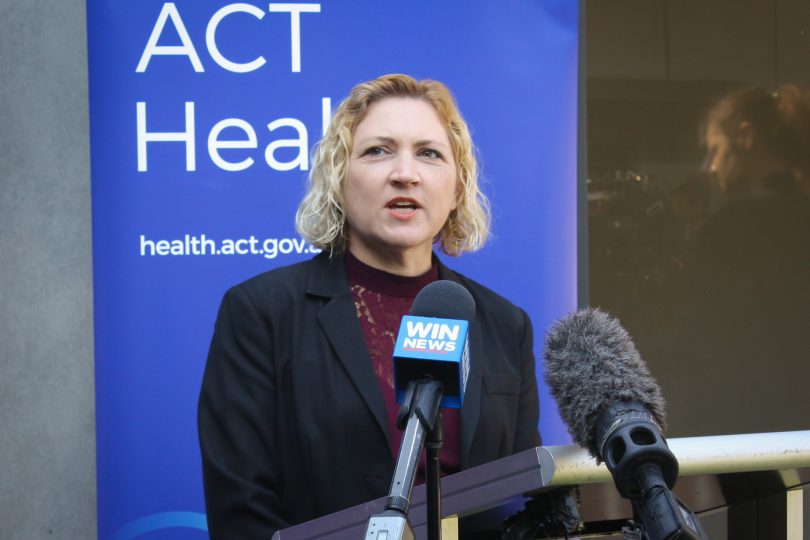 It’s a space intended to serve as an easier entry point to the system than a clinical emergency room, but is suitable for people who require support beyond what can be provided by community organisations.

Minister for Mental Health Emma Davidson said people will be able to visit the space and speak with peer workers who can offer them support in managing any distress.

“You can come in, connect with someone and get connected to the right services that help with your individual needs.

“It is not just for people with mental health conditions but is available to all Canberrans aged 16 and over, including people in caring roles, who may be facing some challenges and additional stress in their lives,” she said.

“The Safe Haven space will play an important role in supporting people before they reach a crisis point.”

The journey to launching this particular space has been a long one with many twists and turns. Initially, funding for a pilot program for two Safe Haven Cafes – one in Canberra’s north and one in the south – was provided through a COVID-19 mental health package in 2020.

A location for the pilot program was to be finalised in January of this year but was delayed due to issues around finding a suitable spot.

The Canberra Hospital was originally flagged as its home, but it was later ruled out given the extensive construction works happening on its campus.

READ ALSO: History lives on in Queanbeyan thanks to Canberra’s Green Shed

In October, Ms Davidson told the same estimates hearing that the Belconnen area had been identified as suitable because there were more call-outs for the PACER service there than in other areas.

Ms Davidson has previously said initiatives like the Safe Haven Cafes and the PACER model help decrease pressure on the acute end of the system which is already under stress.

The Safe Haven at the Belconnen Community Health Centre is a 12-month pilot program, and it will initially be open from 4.30 pm to 9 pm from Tuesday to Saturday.

Ms Davidson said with everything going on at the moment, it’s important for services to be flexible and adaptable.

She noted learnings from the pilot program will help inform future service delivery.

The Commonwealth Government will also fund a Head to Health mental health facility on the same site. It will be run by mental health provider Stride, which already operates two similar spaces in NSW.

Interesting idea. However, it’s best to always be quite cautious and guarded about what you say to strangers, and to people who say they are there to ‘help’ you. I know of stories of people who were taken to mental health facilities (against their will) and had mental health orders made against them just because of the seemingly ‘good intentions’ of others.

This is awesome!! Nice work!!

Sammy Wegner you were talking about this concept years ago

This is cool as. Not everyone has the strength to go see a professional in the classic setting.

It's a great start, but it's only for 16 and up and it's only in the afternoons and evenings.

Not great if you've got kids under 16.

Not great if you're struggling before 4.30pm.

But maybe after the 12 months are up they'll improve the model.

Jenni Zimoch celebrate what it is, which is a start. No need to qualify it with negatives just because it isn't everything for everyone

Where's the one for southside?

Fantastic! Hopefully a South side place will open quickly. I’m glad it helps people in carer roles as well as we are often in need of support too

Kara Negus - what a great idea

Errol Jobsz - 4 minutes ago
$10 million won't go far on that road. View
Brett Griffiths - 59 minutes ago
Excellent! It’s the best bypass road, onto Jerangle then Bredbo, for when the Monaro highway is shut down, as it was recent... View
Topher Garlik - 1 hour ago
10mil that will fix the pot holes, if they serious can double that 💰 View
News 4

Pammy Howarth - 18 minutes ago
Penny Hemsworth Absolutely. View
Milenko-Slavenka Jovanovic - 19 minutes ago
Camille Martin What is that to you, mind your own business. View
Rauny Worm - 52 minutes ago
maybe if he lived here, where billionaires don't pay tax anyway and there is no expectation of corporate giving( except to ce... View
Lifestyle 20

Jane Skillicorn - 1 hour ago
They are so funny!!! View
News 3

Capital Retro - 3 hours ago
And this is a natural occurrence, about every 50 years. Next Canberra bushfire disaster due about 2050. View
phydeaux - 3 hours ago
Except that the ember attack critically affecting Duffy, where most houses were lost, was from the then adjacent pine forest,... View
Alex Kay - 3 hours ago
Fay Dickie move then, that huge tree was probably there well before you View
show more show less
*Results are based on activity within last 7 days

@the_riotact @The_RiotACT
#DixonAdvisory - for decades the first choice for financial advice in #Canberra - has entered voluntary administration due to mounting liabilities, potential class actions and penalties owing to the corporate watchdog https://t.co/3IHElcJyLS (33 minutes ago)