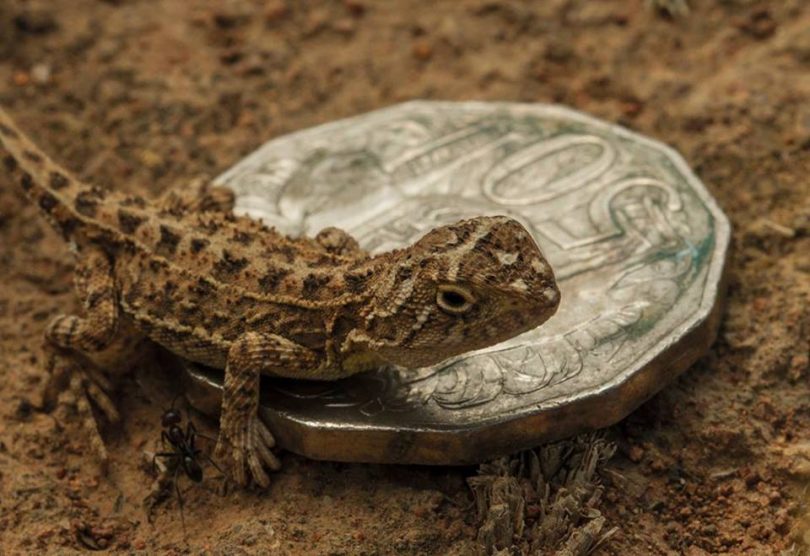 This tiny grassland earless dragon was photographed in the Jerrabomberra Valley on Monday. It is among the rarest reptiles in the world. Photos by Dr Brett Howland.

There has been excitement in Canberra’s wildlife circles this week with one of the world’s rarest reptiles, the tiny grassland earless dragon, being photographed in the Canberra Nature Park shortly after hatching.

The tiny lizards, which weigh around five grams, are rarer than pandas with only a few populations on the outskirts of Canberra left.

They are also incredibly difficult to spot given they are very good at camouflaging themselves and like to hide down spider burrows in the dirt.

According to ecologist Dr Brett Howland from the ACT Parks and Conservation Service, grassland earless dragons are at risk of extinction in the near future even though much has been done to improve their survival chances in the past five years. 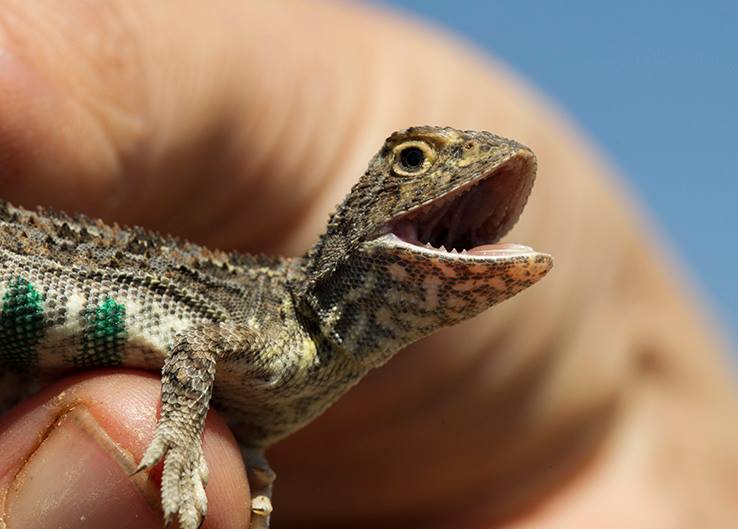 The little lizards are incredibly difficult to spot given they are very good at camouflaging themselves.

“This species has suffered declines in recent decades likely due to a combination of drought, overgrazing and climate change,” Dr Howland said.

“The plight of this species highlights that fighting loss of biodiversity, even for an animal the size of a 50 cent piece, is both a local and global issue.”

Dr Howland said that he discovered the juvenile grassland earless dragons last Monday (25 February) in the Jerrabomberra Valley as part of the monitoring program for the little lizards. He said they would have hatched in the last couple of weeks. 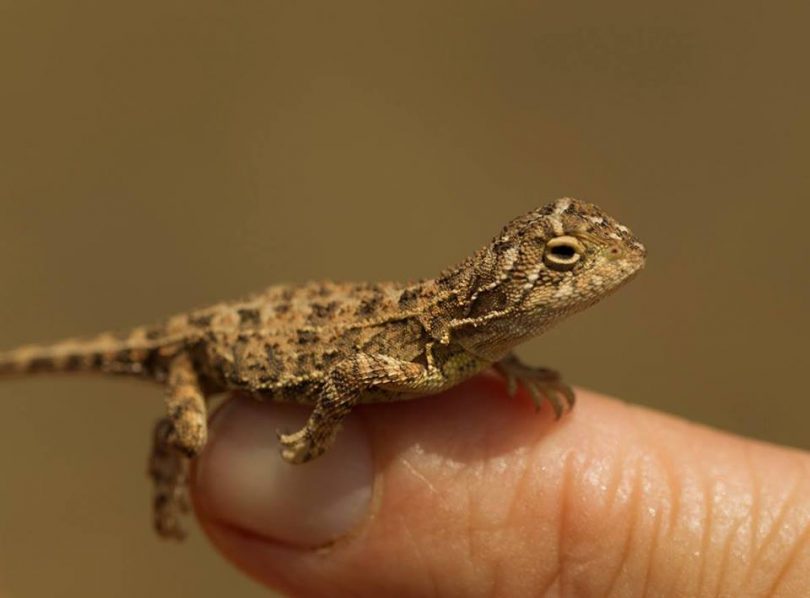 Up until 1991, grassland earless dragons were thought to have been extinct.

Dr Howland said the mother would have laid her eggs in a spider burrow last November/December and then covered them up with soil, with the hatchlings crawling out of the soil 2-3 months later.

The grassland earless dragon (Tympanocrytis pinguicolla) was thought to have been extinct for 30 years up until 1991 when biologist Dr Will Osborne of the Institute for Applied Ecology at the University of Canberra was walking in the Queanbeyan Nature Reserve with his young son on his shoulders and happened to push aside a stone with his foot.

“What was suddenly revealed underneath was one of the most exciting moments of my life,” Dr Osborne said.

“To this day I don’t know how I managed to lift my young son down from my shoulders so quickly to leap after the lizard and to catch it.”

In recent years, much has been done to try to protect their habitat including the ACT’s controversial kangaroo culls and a patchy method of burning (mimicking past indigenous practices) which helps to clear some areas of tall grass which make it difficult for the little lizards to hunt for food.

Dr Howland said that a lot more still needs to be done to protect the grassland earless dragons and the ACT Parks and Conservation Service is “ramping up” what they do.

One initiative being considered is to establish a ‘Noah’s Ark’ or captive colony of the grassland earless dragons at a zoo.

Today (3 March) is the United Nation’s World Wildlife Day aimed at celebrating and raising awareness of the world’s wild plants and animals such as the grassland earless dragon.

This year, World Wildlife Day is celebrating with an underwater theme for the first time – ‘Life below water: for people and planet’. Please click here for more information.

Meg Thow - 21 minutes ago
Vote them out Canberra. Highest taxes- lowest services... View
Steve Wood - 3 hours ago
And who is going to do what about it... Andrew Barr pfft View
ACT Election 94

Danny O'Donnell - 6 hours ago
Lynda Bailey Daniel would have that tucked away 💵💵😜... View
Opinion 19

A tale of Tommy the spaniel and the earless dragons

Dangerous Canberra driving caught on camera could have had ‘tragic outcome’

@The_RiotACT @The_RiotACT
The Woden Town Centre after hours can be a lonely place but all that is about to change https://t.co/Fp5jeIgoHE (5 hours ago)