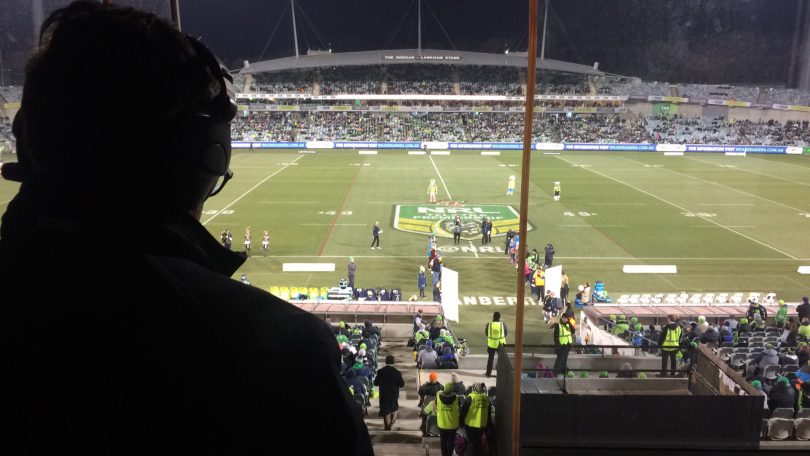 I was scheduled to commentate the Raiders versus St George-Illawarra NRL game on Thursday night at GIO Stadium. I was beginning to feel anxious about it before it was called off.

Sports commentators by their very nature are a resilient group. Essentially radio commentators just get in and call what is in front of them, at the same time avoiding distractions and contrary thoughts entering the mind. Concentrating on what the listener is hearing is paramount.

Essentially I am there on my own talking rapidly for close to three hours without a safety net. Only the co-commentators allow time for a break and to alternate the flow. Their role is critical to telling the story to the listener.

Every commentator will tell you it is an adrenalin rush. By the end of the game I am drained, unable to have a meaningful conversation for some time after getting off-air, and more often than not, unable to sleep properly.

Having said that I know it is a privilege to able to commentate. I love it, and that’s why I’ve been involved in broadcasting for over 30 years.

Usually in the lead up to a game there is considerable anticipation. And preparation is the key. I often try to visualise possible scenarios and outcomes.

It’s been that way for as long as I can remember since I began my commentary career.

But in the lead up to Thursday night’s game between the Raiders and the Dragons it was hard to prepare. Somehow it didn’t seem right for me to be commentating at an empty stadium while the rest of the community was effectively in lockdown.

Sport in these uncertain times can offer an escape, and I am the first to admit that I love commentating the Raiders. I bleed green and was looking forward to watching them play but at the same time I felt uncomfortable being part of something that went against the grain of what everybody else was being told to do.

That said, and this may sound hypocritical, I was prepared to commentate the game, having committed to do it at the start of the season. I also knew full well that the NRL and the Raiders were doing everything possible to ensure protection for everybody involved. In no way did I feel as though I was putting my health at risk – or anybody else’s.

In the end, though, the NRL’s decision yesterday (23 March) to suspend the 2020 season was the sensible thing to do.

Simultaneously, I feel for the people involved with the Raiders club, and for that matter, at the Brumbies and all other sports organisations and individual athletes. They now face an uncertain time with cutbacks inevitable until sport resumes.

I regard many of them as friends, and desperately hope they are all still okay at the end of this.