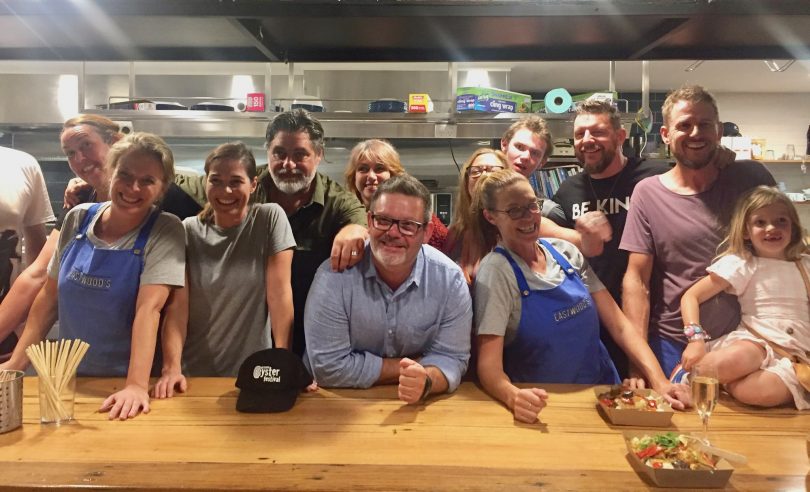 Spot the celebrity chef: they came to connect, with farmers and producers, and everyone else they could find. Photos: Lisa Herbert.

A cheer went up as three recognisable blokes were spotted heading down the hill on foot towards Eastwoods in Bermagui last Wednesday evening.

Hundreds of locals had set up at tables and on rugs, arriving at Eastwood’s Cafe by foot, bike, car and golf buggy from 5:00 in the afternoon, groups of friends celebrating together.

Kelly Eastwood came straight from the kitchen to meet her old friends and colleagues – Matt (the Cravat) Preston, Gary Mehigan and Manu Feildel – with hugs of gratitude.

Preston and Mehigan had travelled by road from Melbourne, picking up Manu in Merimbula, visiting food businesses and areas affected by bushfires along the way. 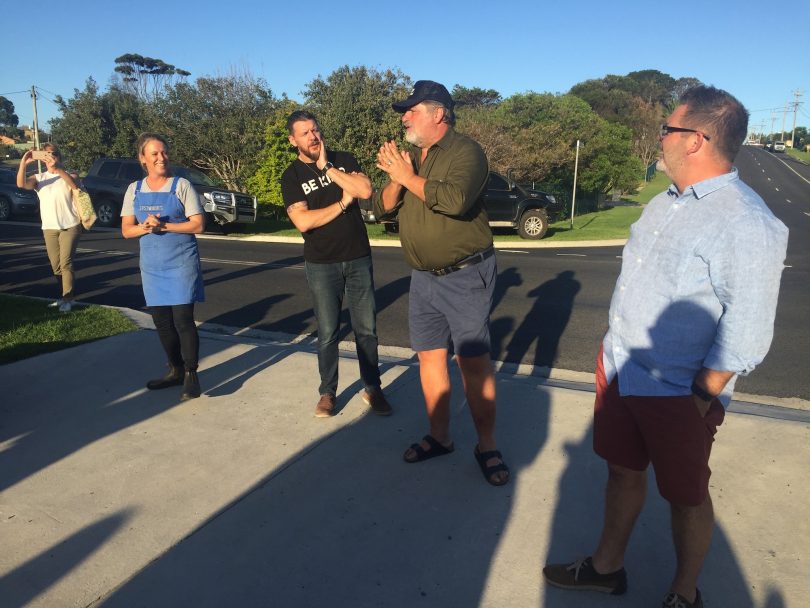 They just walked down the street like three friendly blokes.

“It was a mixed trip up from Melbourne, most of it was beautiful and joyful, and all about the food until around Cann River, it became quite confronting and difficult to hear the stories from these people. This is the little bit that we can do by getting people on the road and to Bermagui.

“Come to Bermagui for your holiday … or Narooma, or Pambula, I could move to Eden or Bermagui. I’m pretty impressed by the golf course here.” 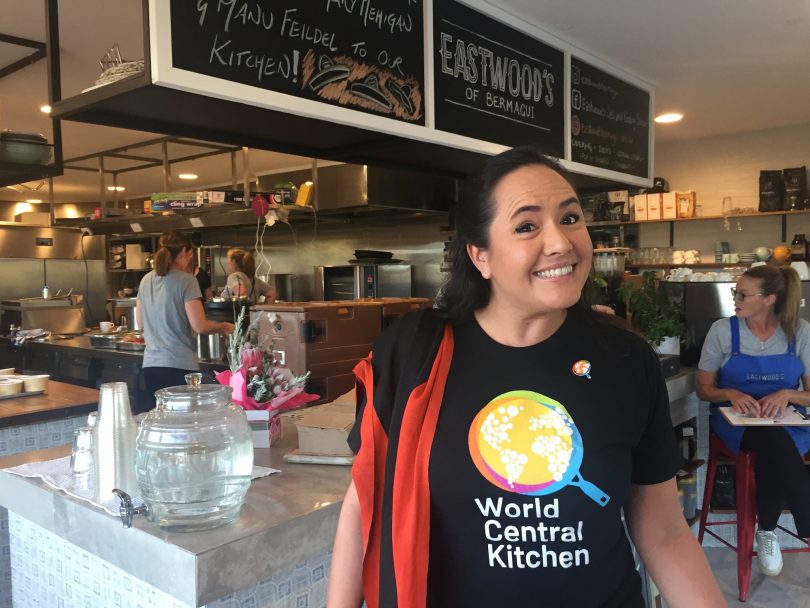 World Central Kitchen along with Kelly Eastwood produced over 42,000 meals for bushfire victims over summer.

Of the road trip idea, Manu said “we all nearly started working together and it never happened, but it is going to happen this year, 2020. They said they were going to do a road trip and I said I’m in and we’ve met some amazing people here. We are getting together but also giving back to the community.”

These three chefs were intending to help in the Eastwood’s kitchen, but a queue formed to take photos of and with them, so they didn’t make it inside until main course when Gary took the reins and showed he really is an amazing Head Chef, and meals flew from the pass in no time. 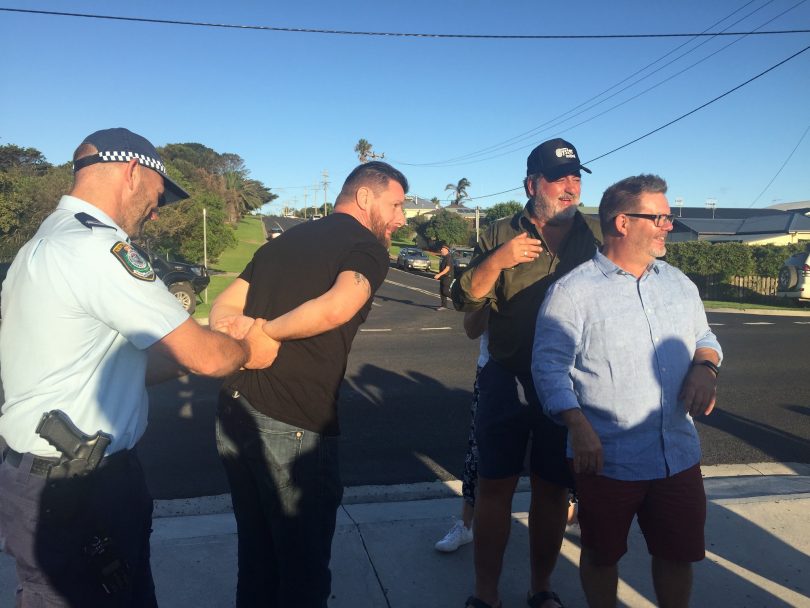 Arrested by local cop Mick for some bad jokes, Manu, Gary and Matt hammed it up.

The atmosphere was celebratory, cathartic and the kitchen team was functioning like a machine. As Kelly says “after our seven weeks operating as the World Central Kitchen disaster relief headquarters, we can do large numbers more easily, we really learned a lot”.

Kelly Eastwood got to know these much-loved chefs during her time working on various Australian TV cooking shows.

“I worked with Manu on the third season of My Kitchen Rules, then I did two seasons of MasterChef [seasons 5 and 7] and worked pretty closely with the judges, and I’ve also worked on two of Matt Preston’s cookbooks,” she says.

Which is how the trio came to the coast.

“I received a phone call from Matt. He’d been watching what we were doing with World Central Kitchen and what was happening down here on the coast. He asked if they could come and visit and do whatever I wanted them to do! 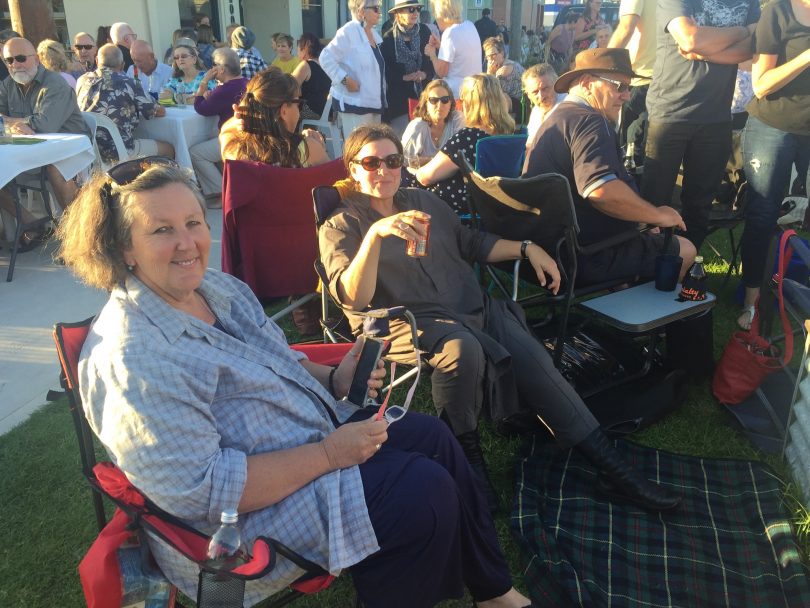 Quite a few firies were spotted in the crowd, Kathleen McCann of Tanja RFS.

“So we put together a pop-up idea, which sold out overnight. There were200 tickets, we kept 50 aside for all our volunteers and another 50 have crept in, so we have 300 here tonight.

“The guys offered to cook, but I’d like them to hang outside and interact with everyone. People have paid to see them, and I think it will really lift the town’s spirits.”

Kelly looks tired but happy after a gruelling Summer.

“We did the WCK for seven weeks and produced 46,322 meals. We learned so much: how to cook en masse and how to juggle the equipment that you’ve got to make it work. We couldn’t have done tonight efficiently without that experience. And now we have the confidence to do bigger numbers.” 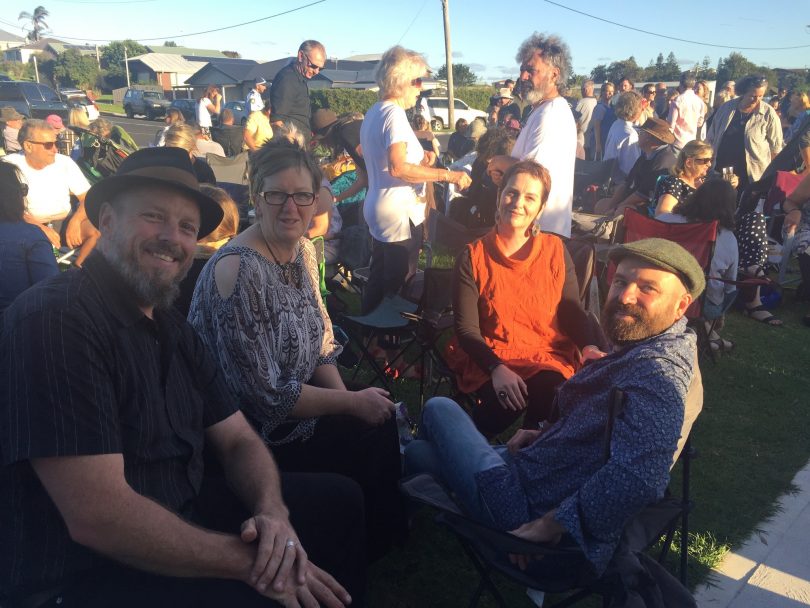 Queues were long, but people were patient and the food was worth the wait. Eastwood is well trained and doesn’t skimp on ingredients or presentation.

The Thai soup broth was flavoursome and balanced, the main ingredients perfectly cooked. Three Thai-style curries for main course were Marlin, Chicken and Vegan, all rich and warm and “well worth the wait” as diner after diner attested.

It was all washed down with buckets of wine and a famous brioche doughnut.

“It might be March but what a way to re-open our doors for the year!” says Eastwood. “They were so kind, gracious and generous with their time. They spent so long talking to everyone that attended, then jumped into our kitchen to help execute 300 meals. It was everything we hoped for and more.” 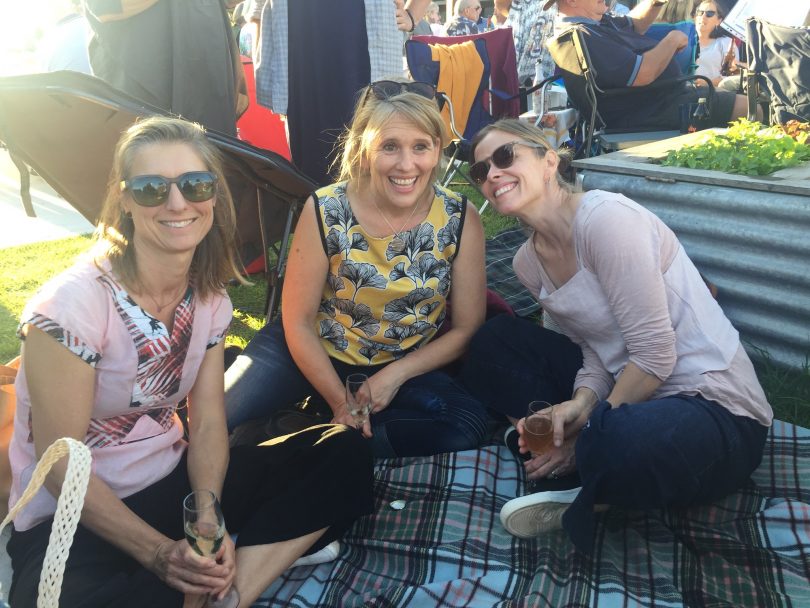 Locals out in force to relax and catch up at Eastwood’s Pop-Up.

“We wanted a community gathering, we wanted to lift everybody’s spirits after a terrible start to the year, and they went above and beyond to help make that happen.”

Matt Preston said he’d been touched by the stories he’d heard from people, and he told the crowd, “we’ve all worked with Kelly at different times in our careers, and you’re really lucky to have her here in Bermagui, but she’s also lucky that you’re all here for her and for each other tonight”.