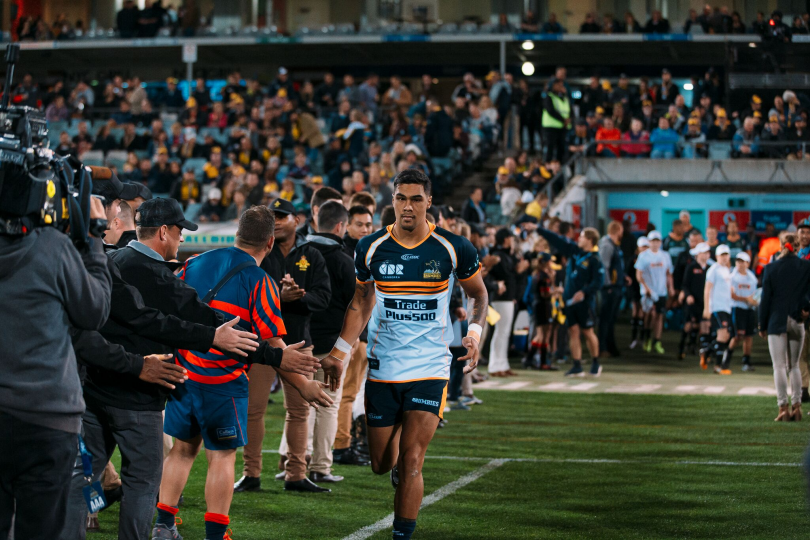 Brumbies winger Chance Peni has been suspended for five matches following his high tackle during Saturday night’s game against the Canterbury Crusaders.

Peni’s five week suspension will run up to and include 17 June following a judicial hearing that took place overnight.

Peni received a yellow card for a high tackle on Crusaders fullback Israel Dagg which occurred in the 19th minute of the match at GIO Stadium.

He was subsequently cited post-match and after assessment by the SANZAAR Foul Play Review Committee was handed a five week ban.

In his finding, Foul Play Review Committee Chairman Nigel Hampton ruled that the high tackle deserved a seven week suspension but reduced to five after Peni showed remorse on the field.

“The player has received two previous periods of suspension for similar incidents in the preceding 12 months, and the Foul Play Review Committee added a further week to the sanction for that aggravating factor.”

“However, taking into account mitigating factors including the Player’s remorse shown on field and his pleading guilty at the first available opportunity, the Foul Play Review Committee reduced the suspension.”

The winger will miss the Super Rugby fixtures against the Rebels at GIO Stadium, the two-week tour to South Africa with matches against the Lions and the Bulls, the home clash with the Sunwolves and the game against Suntory in the June Test window.

Brumbies CEO Michael Thomson said it was disappointing for the incident to warrant a five week suspension.

“It’s disappointing to lose Chance until after 17 June as we felt that the incident had been dealt with appropriately at the time by the highly experienced referee and TMO,” Mr Thomson said.

“We do however respect the decision of the Judiciary and will look forward to having Chance back available for action after 17 June.”