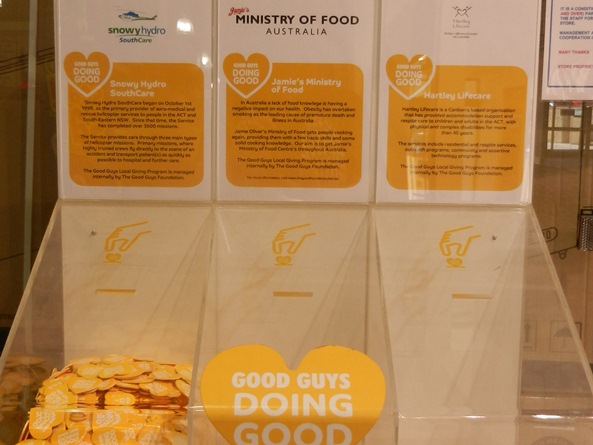 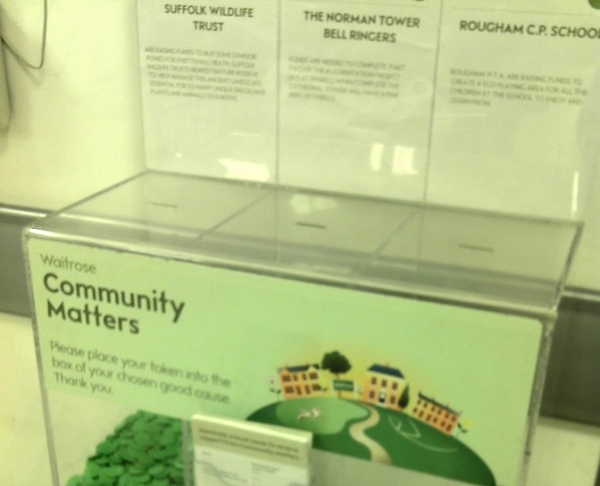 A dear friend of mine irregularly sends me snaps of the charity token bins at his local Waitrose supermarket in Suffolk. After discovering a similar arrangement at The Good Guys we did a brief desktop analysis.

The major findings were that:
— Tuggeranong likes Jamie Oliver better than Suffolk;
— The English support historic and romantic things – bell ringers and wild ponies;
— the people of Tuggeranong REALLY like a helicopter.

However, the Good Guys did announce in February that their Good Guys Local Giving Program had donated more than $5 million to over 150 local community organisations around Australia, supporting essential programs, services and projects at a grassroots level.

That is sort of nice.

If you had to travel that far to a hospital you’d probably like a helicopter too.

Good point that one.

Grill’d Belco have a similar arrangement.

Grill’d also have the same system – I like it.

If you had to travel that far to a hospital you’d probably like a helicopter too.

Jaime Oliver is a wanker and should keep his grubby english hands off my delicious, greasy burgers.

I think hartley lifecare, great work though they do, need to work on their brand recognition.

DJA - 24 minutes ago
Don't see any blueys in the backyard, but do see dragons (I think they are jacky dragons) and cunningham skinks. View
News 1

Michael Ilsley - 4 hours ago
How lucky are those children going to be being taught by such an incredible person. View
Rhonda Maxwell - 7 hours ago
Brad is an amazing young fella who is living a full life. His family and friends are s wonderful support as is his footy team... View
Pam Perkins - 8 hours ago
A very inspiring young man all the best in all your future endeavours and wonderful community support... View
Community 10

Acton - 5 hours ago
I use a trap which is effective in catching individual wasps and discourages nesting. The trap uses a European wasp attractan... View
Ricky Gill - 20 hours ago
Same as getting burnt the sting from these buggers😞 View
Opinion 54

JC - 6 hours ago
It was a private facility unlike those in Kambah which you describe. The only fault of Government here is that they have let... View
Simon Noffke - 18 hours ago
Sad to see the end of memories coaching there many many years ago View
Community 4

aussie2 - 18 hours ago
Firstly I would be challenging directing all southbound traffic to Woden interchange. We are spread out. Surely those outside... View
chewy14 - 21 hours ago
I actually like what they are proposing here and I think integrating the CIT into the new development space is a sensible mov... View
show more show less
*Results are based on activity within last 7 days

The Enlighten Festival kicks off this week, so head out to one of our National Institutions to see the Illuminations!...
Courts & Crime 2

A Canberra father accused of repeatedly beating his wife and choking their daughter will be released from custody after he...
News 14

@The_RiotACT @The_RiotACT
Despite their scary appearance, blue-tongue lizards are laidback and loved in Canberra. Ian Fraser asks if there's a familiar bluey in your backyard? https://t.co/pTVszMYre7 (3 hours ago)