Chifley and Curtin’s stroll to be bronzed 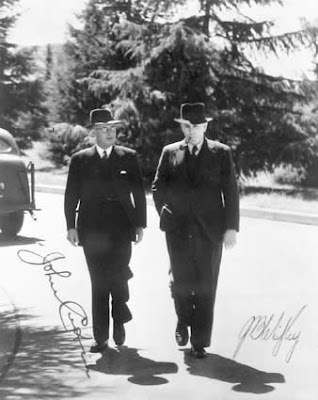 Jon Stanhope has announced that the leftover money in the public art program is going to go on bronze sculptures of his heroes Ben Chifley and John Curtin:

“The sculptures will be life-like reproductions in bronze based on a well-known photograph of then Prime Minister John Curtin and Treasurer Ben Chifley walking near Parliament House in 1945,” Mr Stanhope said.

“The sculptures will be located as close as possible to the original location of the photo, which reflects an important era in Canberra’s social history, when politicians would stay at the Kurrajong Hotel and walk to work at Parliament House (now the Museum of Australian Democracy).

“I believe these sculptures will be of great significance to Canberra and the Nation and I look forward to their unveiling in the lead up to Canberra’s centenary in 2013.”

Perhaps if the public art program had delivered more works like this (Peter Corlett, whom many of you will know through the “Simpson and His Donkey” sculpture at the War Memorial, is expected to do it) it would have had more support in the community?

It is hardly cutting edge art is it?
Or supporting and encouraging local artists.

Curtin and Chiff? Will there be a bottle of booze in the collage?

Yep, I like the Kambah sheep. And I like the Civic sheep. Just makes me chuckle to see any kind of sheep in the middle of the city.

Forget the bronze and put the brass into HOSPITALS or POLICE.

The best community sculpture in Canberra is at Kambah Village. Metal sheep graze on the slope on the corner of Drakeford Drive and Marconi Cres – what makes them so wonderful is the interactive way the community has adopted them. In summer locals leave hay for them, or place buckets of hay around their necks. At Easter they get bunny ears and at Christmas reindeer ears, santa hats and all kinds of decoration. In heavy rain they’ve been given gumboots.
A great community sculpture.

I think it’s appalling that the local city council is intent on idolising Labor federal pollies.

IF we need more statues, then at least make them local – oh, someone like, um, Dennis Stevenson, or Steve Pratt, or Tony De Domenico.

Sonic, how about just returning these surplus funds to consolidated revenue where they belong.

They can just melt down the Al Grassby statue that will save some of the cost of the bronze.

Surely the money would be better spent on employing someone who can take 15 empty oil drums, run them over with a JCB, weld the resulting mangled heaps together in the shape of a letter H, paint them luminous blue, name the outcome “my heaven in a wildflower,” and place it on a wooden plinth besides the Gunghalin Crawlway?

Owing to modern sensibilities, the pipe will be replaced with a kazoo.

They should use the money to put in more speed cameras.

How many humidity cribs would this buy. Spending money on health would be far more appropriate than Artwork. Bah Humbug

They’re also funding a statue of former PM Alfred Deakin (founding father of the Liberal party and a vegetarian) at Deakin shops.

Frankly, this sucks. Where is the Canberra arts link? Three statues are being made (including the Deakin work) of FEDERAL politicians. Two statues (Chifley and Curtin) are likely to be on NCA-controlled land (if they’re being true to the photographic location). Two of the statues are to be made by a Melbourne sculptor (don’t know who’s doing the Deakin work).

If they were that hard-up to find a Canberra arts project to fund, they could have spent the money on more art teachers or materials for CIT or Canberra’s public schools. Leave the funding of tributes to federal politicians, on federal land (except Deakin shops), by non-Canberra artists, to the federal government.

The problem with the public arts program wasn’t subject choice (although Al Grassby certainly was a controversial choice, particularly when it cost the same amount as important equipment for TCH’s NICU for which they had to raise their own funds at the same time). It’s the lack of getting priorities right.

At last Sonic does something I can support! (I’m sure he’s pleased)

Stanhope mentioned a cost of around $200k on the ABC radio this morning.

I was amused by listeners having a whinge about choosing Labor PMs to make statues of – my advice, just get over it.

So how much is needed for this? Better than a pile of wood and stones or twisted metal as we have had in the northside…..

Futureproof - 5 hours ago
Vote early, vote often. Will voter ID solve this?... View
kenbehrens - 6 hours ago
Stephen, as it turns out, School ID cards are a thing, if you work in a school you'll need a Working with Vulnerable People's... View
franky22 - 10 hours ago
I take it that the 55 senators are part of the nutjobs still claiming that the election was stolen from Trump ? View
News 2

Frank Spencer - 5 hours ago
Leaf litter makes the best compost. View
TimboinOz - 6 hours ago
Leaf-litter!!! At home? Buy a 2 or 3 layer worm-farm and start gardening. Even if it's just for salads until Autumn. And, eve... View
News 3

Futureproof - 6 hours ago
The roundabout at Monaro Highway/Isabella Drive is particularly dangerous with the height of the grass. You should be able to... View
Capital Retro - 6 hours ago
That would be tantamount to the cosseted cyclists in Canberra who get free bike tracks and then complain that they can't use... View
bigred - 7 hours ago
Of course, both sides of politics could encourage interested and motivated residents to "adopt a patch" and reduce the total... View
News 1

Helen Roberts - 6 hours ago
I welcome FOGO in Cook. We are more able to separate food scraps. For example I have found that the coffee capsules we used t... View
Scott Harvey - 7 hours ago
Most people don't buy organically grown fruit and veg therefore the scraps aren't organic either. You cannot add non organic... View
Lifestyle 19

@the_riotact @The_RiotACT
Ghanaian born and Canberra bred singer @genesisowusu has had a massive past week, claiming two Triple J awards and then scooping four ARIA awards on Wednesday night, including Album of the Year https://t.co/kjMabj6smr (52 minutes ago)