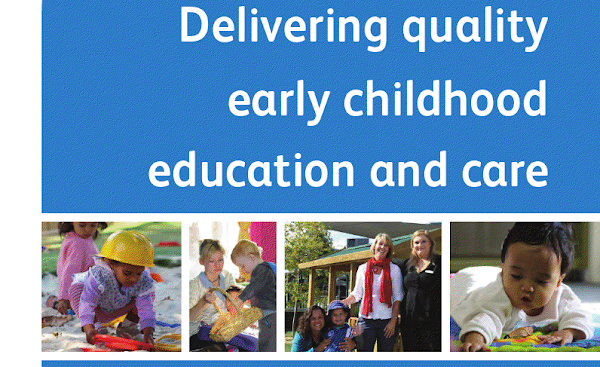 Joy Burch is celebrating her publication of all that is good in childcare:

Ms Burch said the ACT Government-produced information booklet, Delivering Quality in Early Childhood Education and Care, shows that since 2001 there has been an increase of more than 80 per cent in the number of long day care places across Canberra, from 4121 to 7966, and the number of long day care providers has grown by 37 per cent, from 80 to 126.

“This report shows that the record investment in childcare that the ACT Labor Government has made has helped the ACT childcare sector grow substantially over the past decade, and further investment in recent Budgets will ensure that this growth continues,” Ms Burch said.

“In contrast, the report also highlights the former Canberra Liberals’ Government’s abysmal record in childcare, with the number of childcare places and centres remaining stagnant between 1998 and 2001.”

Wonderful. I will tell my daughter, who loves her job in childcare and is studying early childhood education at university, on top of having her diploma, so that she will meet the training requirements to work in childcare in 2014. It’s so rewarding for her that she clears around a grand per fortnight, around 40% less than her school dropout cousin who works in retail. Lucky we all get on well, because it will be a while before she can afford to move out.

Mostly agree. When I worked in the security industry, I could pick and choose my own hours, do pratically nothing and get paid close to $1000 a week. I am now part time working at an OOSH program, work my ass off and get $400-$450 a week. Although this is plenty to live off, the amount of effort I am required to do the job properly means no one stays working with us for long. They all go to higher paying jobs. Just last week, we had one of our best workers (especially good at working with children with a disability) left to go work for the public service. Now he works an extra 2 hours per week for an extra $500. And all he has to do is do the first proof read of government documents. If he stuffs up, the next person does his job for him.

Despite the fact we are paid practically nothing, parents are paying ridiculous fees to have their kids in care (From what I understand, it is worse for care in early childhood). More funding is required for OOSH programs. Because at the moment, OOSH is a baby sitting service and the kids are not learning from it because of lack of funding. We are unable to buy equipment we need. Just last week, I asked for sporting equipment. There was no room in the budget for it. I was told the kids would have to do with the equipment they had (which was over 5 years old). I went out and bought an Aussie Rules ball, some soccer balls and some handballs.

Anyway, if I had waited til next week (new financial year) it would’ve been in the budget. But if I had done that, there probably wouldn’t have been room for us to do a big craft order later in the year.

Wonderful. I will tell my daughter, who loves her job in childcare and is studying early childhood education at university, on top of having her diploma, so that she will meet the training requirements to work in childcare in 2014. It’s so rewarding for her that she clears around a grand per fortnight, around 40% less than her school dropout cousin who works in retail. Lucky we all get on well, because it will be a while before she can afford to move out.

Thanks ACT government. I’ll remember to feel more grateful next time I pay another $50 “deposit” to simply put my name down on a waiting list for my unborn child for care from October 2013 (that’s if I find places with their books still open for 2013).