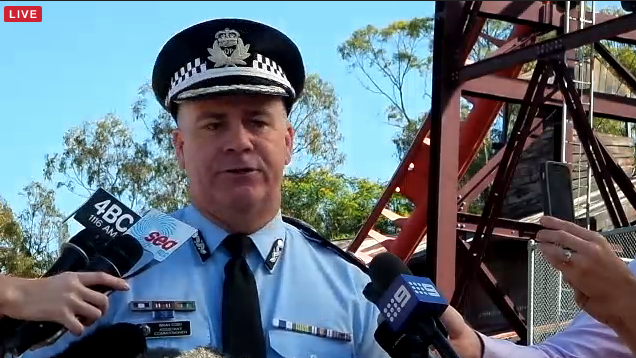 Two children, aged 10 and 12, escaped after the raft on which they were travelling overturned, while four adults including three Canberrans were killed. Assistant Commissioner Codd says the children were thrown from the ride and then managed to extricate themselves.

“It seems from what I’ve seen almost a miracle that anyone could survive that. If we’re going to be thankful for anything, I’m thankful for that,” he said.

Assistant Commissioner Codd said the accident occurred just before the passengers were due to exit the ride.

“The devices that people sit on have come to the conclusion of the ride at the area where people get off,” he said.

“Something has occurred, where two of those have come together, and as a result, one has flipped backwards and it has caught and tossed some of the people that were on the ride backwards on the conveyer belt.”

“That’s off my viewing of the CCTV. The full analysis of how that occurred and how inconsistent that is with normal operating procedures will be very much at the forefront of our investigation.”

Assistant Commissioner Codd said the coronial investigation would examine everything related to the accident, from policies, procedures and maintenance schedules to whether the structures of the ride comply with contemporary engineering standards.

“If and where there are criminal aspects including negligence that warrant being pursued, we’ll do that,” he said.

Note: Assistant Commissioner Codd said in a press conference this morning that two girls, aged 10 and 13, were thrown into the water, but police have now clarified that should have been a boy, aged 10, and a girl, aged 12.

Once again we hear that unions have been complaining about and alerting the company to safety issues for some 18 months and, once again, we hear that those complaints have been ignored.

This dreadful tragedy is one of the inevitable consequences of the union bashing that successive governments have engaged in with their mantra “company good, union bad”.

Wendy Johnson - 2 hours ago
One of my top picks for a facial is Jindii Eco Spa at Australian National Botanic Gardens. The spa is beautiful, spacious and... View
Opinion 29

t2owe - 14 hours ago
I really don't care about what they say about the Libs. Given the antics of the Barr government, just how much more damage co... View
t2owe - 14 hours ago
How about a change of government. It's way over due,. ACT government is consult in name only, and planning is off the wall.... View
News 5

JS9 - 15 hours ago
"But Mr Lawson said he would have thought a Greens party would be opposed to the infill project getting underway that would h... View
News 8

Daniel Duncan - 16 hours ago
Another reason to vote Barr and his crony's out. View
ACT Election 15

Acton - 16 hours ago
You do not dispute the fact that Barr = high rates, but appear to have some conceptual difficulty with 'nothing else matters'... View
russianafroman - 18 hours ago
Maya123, All Labor has done for us is build chic apartments for the rich. The Liberals are looking out for the blue collar bl... View
JC - 18 hours ago
People should also be asking what Coe equals. Because it isn’t overly clear. We know they stand for everything that “anno... View
Lifestyle 2

dolphin - 17 hours ago
why did they bother? View
News 1

Shane Westmore - 21 hours ago
TfNSW has never had a desire to run this service for whatever reason... i would once every month or two travel between Sydney... View
Business 6

Garry James - 22 hours ago
It totally f.... ridiculous View
Daniel Oyston - 23 hours ago
To understand, all you have to do is look at how fit most of our politicians are. When was the last time you saw them exercis... View
Gregorïo Bîskït Kïlcher - 1 day ago
People need to pull their heads in and get on with life. View
Lifestyle 4

UPDATE - 6:00 pm: The storm has passed through the region, with no hail reported, however, our gallery of images...
Lifestyle 7

A Sydney-based taxi driver who visited the South Coast while potentially infectious with COVID-19 has sparked the latest alert from...
What's On 1

The Canberra Liberals have unveiled a suite of policies designed to drive down the cost of motoring in the ACT,...
Opinion 29

The first week of the election campaign proper has come and gone, and one thing is clear - no one...
ACT Election 21

As the election nears, how do we ensure the voices of ordinary voters are heard? We're in election forum season...
ACT Election 15

One day a week of free early learning for three-year-olds and 400 more teachers and support staff for ACT public...
ACT Election 19

On The Campaign Trail today, the Liberals put light rail back on the agenda, Labor focuses on maternal and prenatal...
News 33

The ACT Government has announced tough new measures to stop horses entering Namadgi National Park as part of its 2020...
Opinion 16

@The_RiotACT @The_RiotACT
A Canberra transport company is taking Lifeline's messages to the streets of Canberra and the South Coast https://t.co/eQ8NVzS1qc (12 minutes ago)

@The_RiotACT @The_RiotACT
ACT Policing has confirmed that a 40-year-old man has died following a single-vehicle accident on Uriarra Road this morning. The incident occurred shortly before 7:40 am https://t.co/Dub5SeuxdZ (23 minutes ago)

@The_RiotACT @The_RiotACT
Labor has committed to payments to disadvantaged families of between $400 and $750 per student to cover education expenses if they're re-elected in October https://t.co/bxZndrK4EG (1 hour ago)