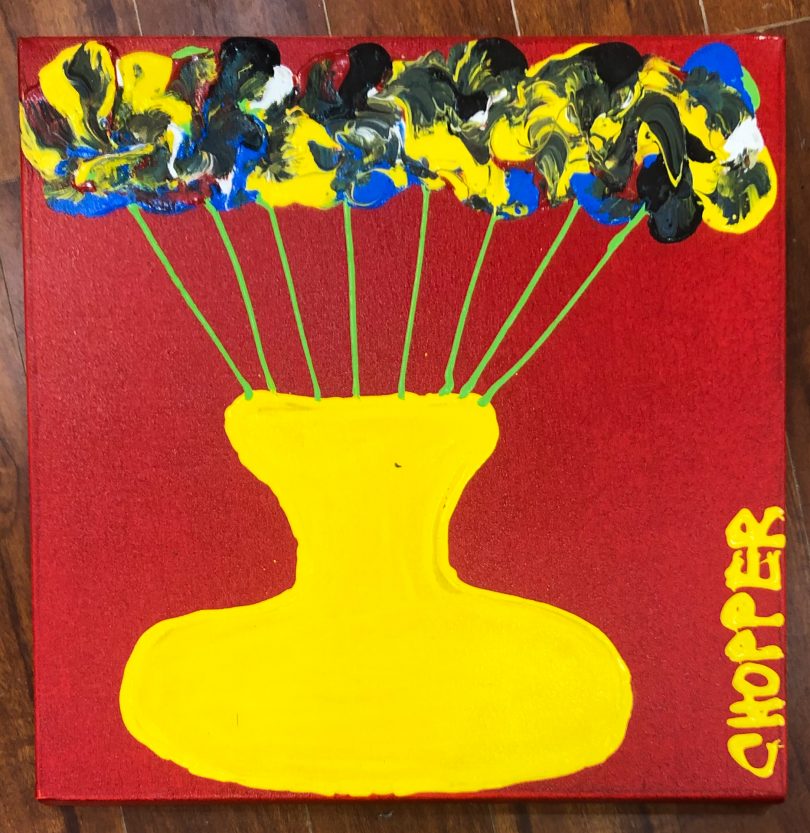 Mark “Chopper” Read and Vincent van Gogh have more in common than trouble wearing glasses. It turns out the colourful Chopper Read is more colourful than we might have thought.

More than 40 pieces of his artwork are going on show – and sale – at Gold Creek’s Aarwun Gallery from this Saturday (24 July) in what looks not unlike the meeting of a naive painter with the bloodthirsty distant cousin the family never talks about.

Most of the works look like they’ve been done by a child (a child with issues), and they all boast the brightest of colours, despite depicting the grimmest of subject matters – Chopper’s life of crime.

They start from his early days robbing drug dealers in his hometown of Prahran in Melbourne through to kidnapping and torturing fellow members of the criminal underworld. The meat cleaver, one of his favourite sharp objects, features prominently in his art.

The exhibition, I Regret Nothing, illustrates how Chopper took up art on his release from jail, travelling around the country with his own stage show talking about his notorious career and selling his art.

He was a prolific artist, using his life and times as preferred subject matter. 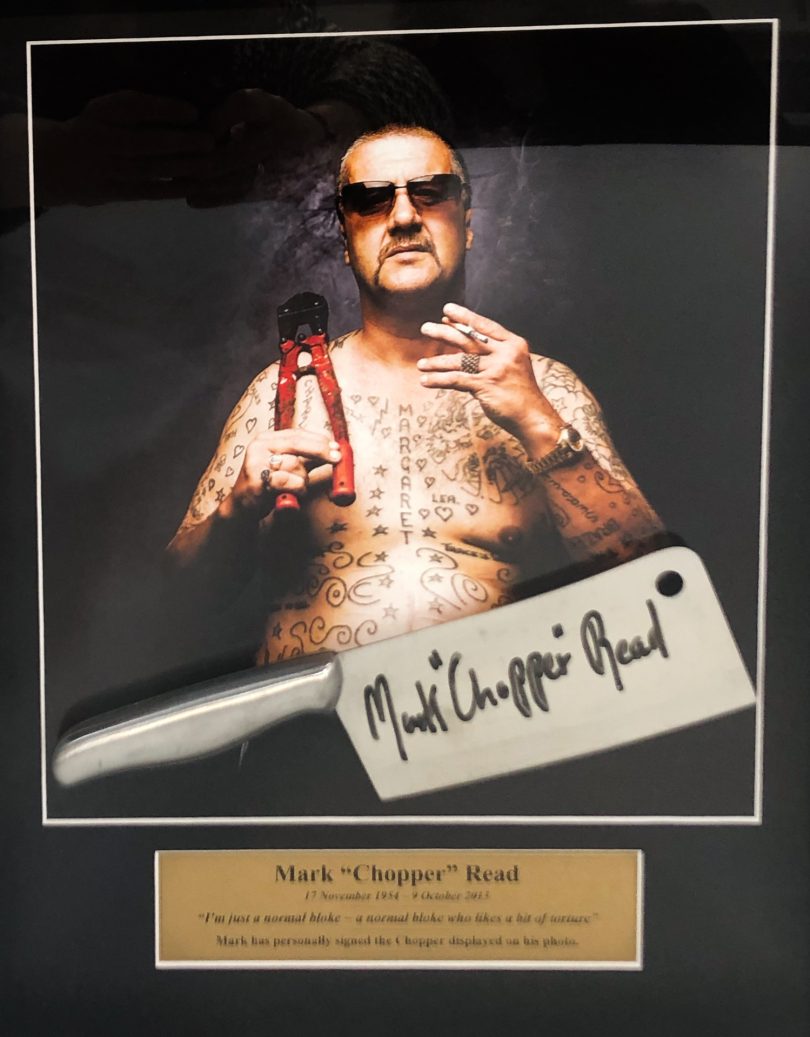 Mark “Chopper” Read, a legend in his own lifetime.

It’s clear he was also inspired by some of the greats. His tribute to Van Gogh titled, sensibly, Flowers for Van Gogh, boasts the brightest of reds – apparently to represent blood.

Each of the paintings has a little message from Chopper on the back, some of which we can’t repeat on a family website. His note to Picasso, in particular, is very graphic.

Apart from taking up art while in jail as part of his rehabilitation, Chopper also wrote a series of semi-biographical crime novels and children’s books and, of course, the 2000 film Chopper was based on his life.

The works on show at Aarwun range to $10,000, with the most deadly piece – and not in a good way – a coffin coffee table complete with a life-size image of Chopper stretched across the lid. Bullet holes and a couple of meat cleavers are included for cutting effect. There’s also a helpful guide to the man’s life of crime, starting with his days as a standover man, through to his claim to have killed 19 people. 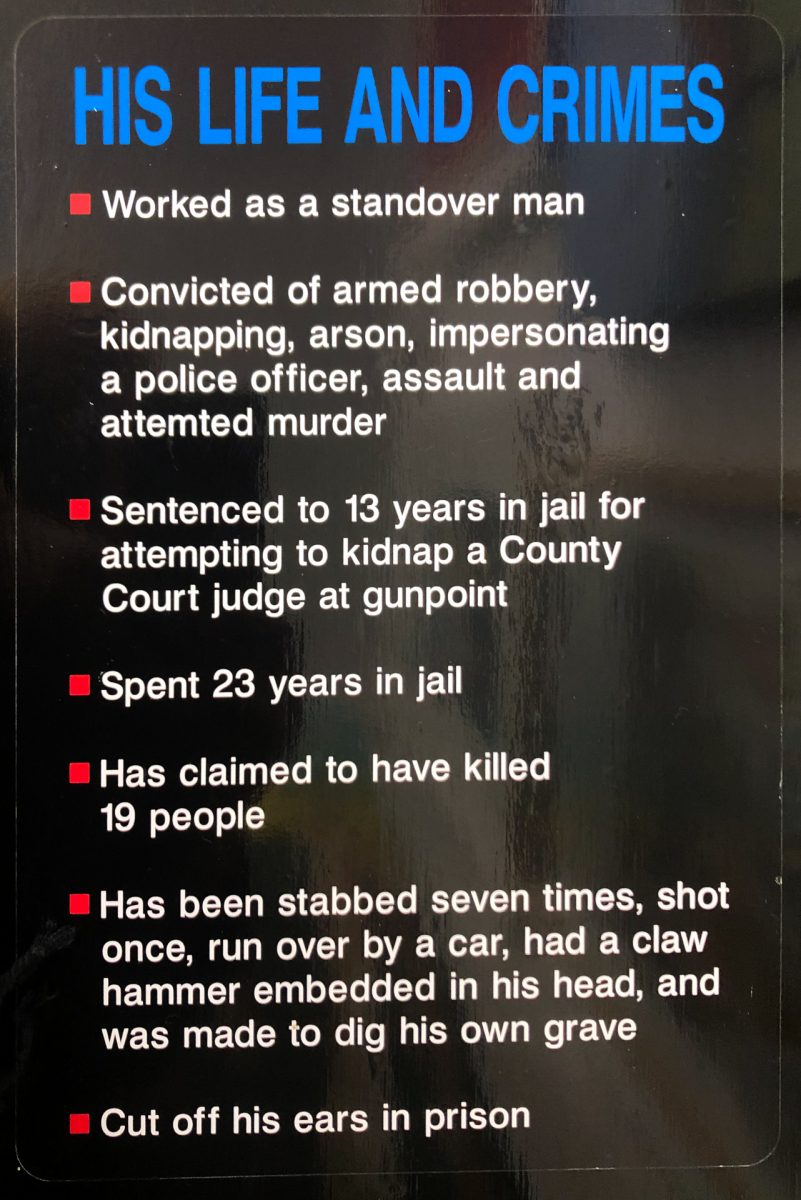 Everything you’ve never wanted to know about “Chopper” Read but were afraid to ask.

The works were collected over a number of years by Peter Hall, a friend of Chopper who worked on the security team at some of the stage shows.

Chopper Read died in 2013 from liver cancer. He was 59. It is believed he contracted Hepatitis A while in prison.

I Regret Nothing is on show at Aarwun Gallery, Gold Creek, from Saturday, 24 July to Sunday, 8 August.

@the_riotact @The_RiotACT
Looking for a year-round #SnowyMountains home that has it all? This beautiful #home on the shore of Lake Jindabyne has every luxury and convenience you could ask for, and some you never knew you needed https://t.co/pXr0NwK2ap (37 minutes ago)