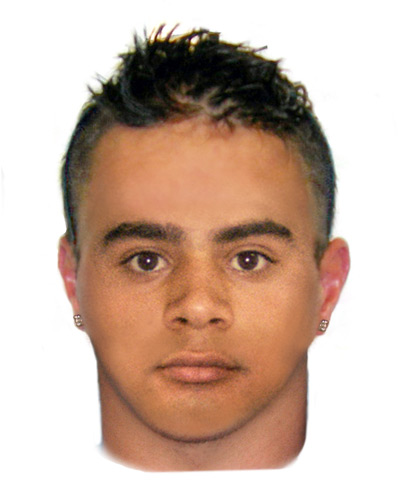 ACT Policing are seeking assistance from the public to identify a man wanted for an assault in Civic around 2.00am on Friday, December 2, 2011.

The offender approached the victim and his friend on Northbourne Avenue near Mooseheads. An argument ensued and the victim was ‘king hit’ and required surgery to his face.

A facefit of the offender has been provided with description; male, early 20’s, approximately 175cm tall of Maori appearance with short spiky hair, tanned skin and a medium to large upper body.

The offender was wearing a white v-neck t-shirt and possibly jeans with diamond earrings in each ear.

Superintendent Mick Calatzis of North District says information provided to Crime Stoppers has been directly responsible for the successful detection, apprehension and prosecution of offenders.

“I strongly urge members of the public that may recognise the individual in the photo, to call Crime Stoppers on 1800 333 000 or via the Crime Stoppers website on www.act.crimestoppers.com.au,” he said.

Information to Crime Stoppers can be provided anonymously.

Diamond earrings in both ears. There can’t be all that many young men around town with that particular distinguishing feature.

Andrew Fisher - 42 minutes ago
Em Jay - I just thought of you. Not sure why. View
Opinion 22

bj_ACT - 2 hours ago
I think you’ve raised some valid questions. There might well be valid answers from the ACT Government to those questions. I... View
aussie2 - 5 hours ago
Most of us know by now that the bus run from civic to Woden is very efficient. They want to change it to a light rail route d... View
News 44

Capital Retro - 4 hours ago
"The data is only accessed by ACT Health if it is needed for contact tracing purposes and contact details are deleted after 2... View
garyfrancis - 11 hours ago
Under what rule, law or legislation is this being bought to us via? View
garyfrancis - 12 hours ago
Argo please. The 28 day "guarantee" really? Who is going to get caught holding onto the information for more than 28 days? Wh... View
Property 36

jorie1 - 5 hours ago
These changes are ridiculous and will only force landlords in the ACT to sell up. It is already not financially viable to hav... View
Maya123 - 7 hours ago
The best time to get houses upgraded would be when the house is sold. This would then cover both rentals and owner live in ho... View
Acton - 9 hours ago
First will be calls from tenant lobby groups for mandatory roof insulation, then better blinds and curtains, double glazed wi... View
What's On 8

Johnny Swift - 6 hours ago
Peter Fogwell 😂 I'm undecided whether or not to ask you to enlighten me. 😂 View
Roberto Manna - 6 hours ago
Samantha Jayne I’ll be watching to see if you marriage works out 🤣 View
Samantha Jayne - 6 hours ago
Cole Petrow why don’t I show you a bit of my work mate....... That might shut you up 👌 View
Lifestyle 2

Alan Davey - 22 hours ago
Thats common sense for you ,some people live and let live, others winge for wingings sake ,... View
Property 10

Gabriel Spacca - 22 hours ago
Because if there’s one thing Dame Patti Menzies stood for, it’s unfettered development. View
show more show less
*Results are based on activity within last 7 days

If you want an example of hospitality grit, of a business team that picked themselves up from the lowest of...
Lifestyle 26

Canberra's Samantha Harvey has quickly become a favourite on Nine Network's latest season of Married at First Sight, not only because...
*Results are based on activity within last 7 days

The developer of the problem-plagued Gungahlin pool has been absolved of liability for building defects, including if further damage or...
Lifestyle 26

Canberra's Samantha Harvey has quickly become a favourite on Nine Network's latest season of Married at First Sight, not only because...
Community 25

@The_RiotACT @The_RiotACT
The Save the Narrabundah Peafowl group will put its issues with road safety and speeding motorists to the ACT Government after the deaths of several peafowl in the area https://t.co/QxMNzZFXoT (2 hours ago)

@The_RiotACT @The_RiotACT
Arts, culture, cafes with quinoa, and even a folk festival. This is the new Queanbeyan, a city that is alive and well https://t.co/c0hLpKFxY4 (3 hours ago)

@The_RiotACT @The_RiotACT
With more than 140 vineyards in the Canberra district, winemakers will celebrate 50 years of the region's finest drops during Canberra Wine Week https://t.co/nWA9owR0Oq (5 hours ago)