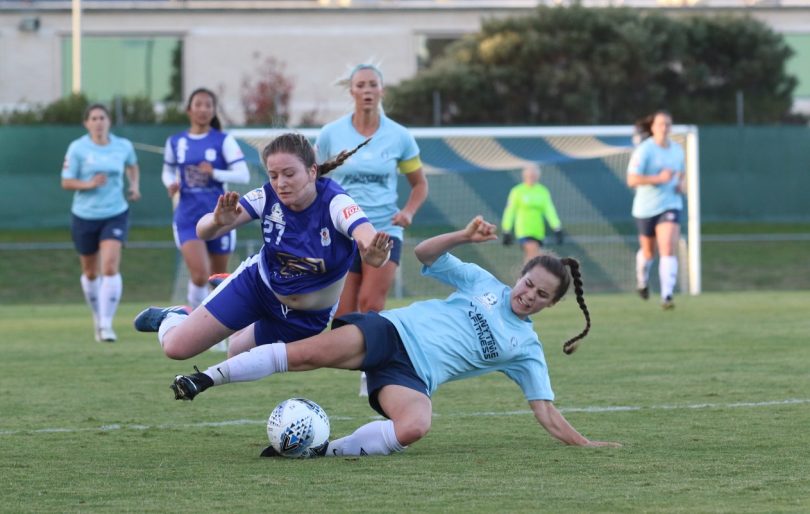 United are four wins from five in the 2019 NPLW season. Photo: Supplied by Belconnen United.

‘Utter dominance’ is fast becoming a phrase synonymous with the Belconnen United NPLW side, after what can only be described as a consistently stellar performance from the team.

United have won eight NPLW premierships in a row, claiming victory in six of the past eight grand finals and have waltzed their way to five trebles in the last six years. You can count on one hand the number of games they have lost in the past six seasons. This season alone, they have conceded zero goals in their first five games while banging in 37 goals.

If that doesn’t characterise a dynastic rule, I don’t know what will.

The lead orchestrator of their reign is Antoni Jagarinec, who first took the coaching job in 2010 when four-nil losses were common scorelines. He admits he pinches himself when he looks back on how far the club has come.

“Back when I first started coaching 10 years ago, there was little pressure to win due to the fact the standard is not as good as it is now,” he said. “There were plenty of moments where things didn’t go our way, but we learnt from them.

“I have been learning every year, so the good thing about that is that we are building every year. So now we are finetuning and looking for the next one-percenter to improve our game.”

Jagarinec calls himself fortunate for the talent United has produced over the past decade, with the likes of Michelle Heyman and Caitlin Munoz first starting their career in the light blue of Belconnen.

“Katie Woodman was even here two years before I came to Belco so that’s close to 12 years. Michaela Day has been here for close to ten years, while Caitlin Munoz played all her junior football here so it’s close to 25 years with the club.

“Then there are around eight girls in the side that have come through the junior ranks from Belsouth, Belnorth or Belwest and now play for the premier league side. That says a lot about our program here.”

Looming as the main challengers to his side’s dominance is a young Canberra FC, who are yet to lose this season under first-year coach Nik Brozinic. An enthralling Federation Cup 3-2 extra time semifinal win over their major rivals on Wednesday night (15 May) showed just why the two clubs are the benchmark for women’s football in the nation’s capital.

“They have really started well in the league this season and have only dropped points against us and Canberra United Academy,” Jagarinec said.

“We are only a third of the way through the season so if they keep this consistency going, they will pose a threat. Canberra United Academy is also looking dangerous this season and we can’t take Gungahlin United lightly either.

“The competition is there and it will come down to the consistent teams this season.”

franky22 - 22 minutes ago
All pollies want electoral reform that will favour their particular demographic. View
Acton - 1 hour ago
If the Greens think that lowering the voting age to 16 will result in more Green votes, they may be very disappointed. There... View
Community 2

Renee Mae - 37 minutes ago
Yes there are root causes but especially here in ACT we can't ignore rental affordability (or lack thereof). So many women ar... View
Property 25

Acton - 49 minutes ago
Certainly low documentation loans raise the risk of default. As well, to add to the risk factors now are greater use of mortg... View
Capital Retro - 3 hours ago
It is timely to revisit what happened in the USA 11 years ago because with speculation that there will be government guarante... View
Acton - 3 hours ago
Low interest rates mean people borrow more. Large loans means people have more money to spend and higher buyer demand pushs u... View
News 4

Nick Swain - 2 hours ago
This business proposal was totally inappropriate for Fyshwick. They would have killed many Fyshwick businesses by clogging up... View
simm - 3 hours ago
A giant fragmentising metal shredder is not the right idea for any built up area. . Other states stipulate a 1200 meter Separ... View
News 1

The next stage of the joint-venture Ginninderry district in west Belconnen will deliver more than 800 residential dwellings, including more...
Breaking 0

A major landslide on a regional road between Moruya and Braidwood, in southeast NSW, has virtually landlocked residents, including health...
Community 15

@The_RiotACT @The_RiotACT
The derelict Commercial Hotel in #Yass is under new management, as the major shareholder of Public bar in #Manuka takes over https://t.co/ss9NhiJQLa (5 minutes ago)