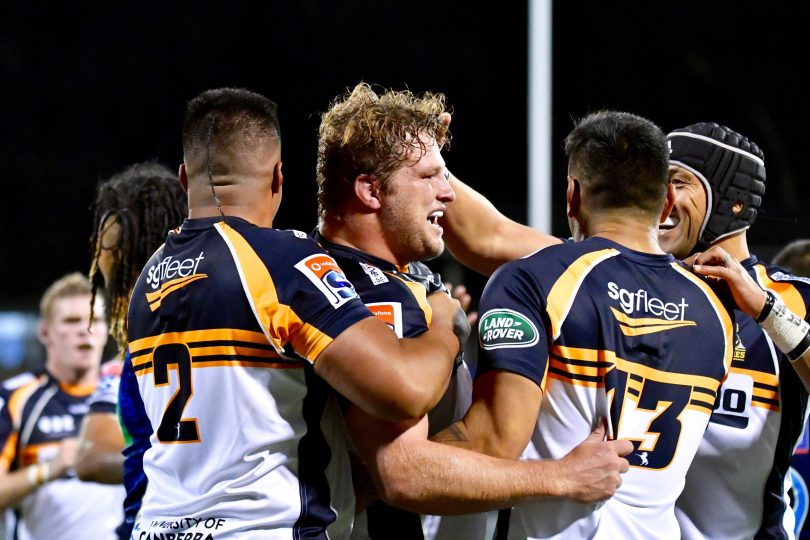 Rugby union has been the focus of off-field controversies over the past few months but Brumbies coach Dan McKellar believes there is a solution to the problem.

Fans are divided and disillusioned with the sport as Rugby Australia has dealt with the controversy of Israel Folau social media posts, causing the governing body to tear up his $4 million contract.

McKellar believes the game can recuperate with the help of positive talk and matches being broadcasted to every TV across the nation for free.

“We need to get the sport on free-to-air,” McKellar said on Wednesday afternoon (22 May). “Whoever is doing the next television deal, make sure that happens so that all the kids have access to see the best players running around.

“We have got to make sure every little boy and girl in the country has access to them and aspires to play rugby union and has the choice.

“At the moment we’re sort of hidden away. FOX is tremendous in their support of the game but I think free-to-air would certainly be a real positive change.”

In the meantime, McKellar said his side will focus on playing attractive rugby to bring fans back to GIO Stadium. The Brumbies have won their past five games at home and will get a chance to extend that record when they play the Bulls at GIO Stadium tonight (24 May).

“All we can do is get our preparation right and perform well on weekends and put on a good product for our fans, sponsors and stakeholders then hopefully they’ll come back and drag a few more people along,” he said.

“People will come back, we just need to keep going on the path we are on. People love the game, it’s the people that are sort of 50-50 that sit on the fence. At the moment they’re on the other side of the fence and we have to bring them back.”

The Brumbies came under criticism for their game style by former Brumbies and Wallabies lock Justin Harrison, who accused the Brumbies of playing “pedestrian” rugby. McKellar said it is time the rugby community banded together and stopped “bashing” the sport.

“Let’s just talk positively about the game. We’ve got rugby union people that are bashing rugby union, why are we doing that?” McKellar said.

“We are starting to see the benefits of four teams and two Australian sides might sneak into the finals. We’ve got a World Cup this year in Japan and the Wallabies have proven in the past that they perform well at World Cups.

“Let’s start talking about the good things and the footy instead of worrying about beating ourselves up all the time.”

The Coach is bang on correct. Fox has and continues to kill the life in this game for all but those that know it already, grew up with it or have parents to take the kids to games (fewer and fewer as the pressures of competing priorities in life get bigger and bigger).

Even just bring back the pre-final Australian-based games. Then it’s only a short gap to the internationals, and the die-hards can get Fox for all the other games and finals.

We’ve already lost one generation to other sports – need we lose another? In which case FOX will dump it after its too late anyway?

I’m sure FOX will be happy to let free to air viewing of the games they spent $285 million to have exclusive access of.

NRL is a business; not a sport.

When the Raiders began in 1982 the local TV station Capital Seven wanted to show all games live. The NRL vetoed it because of the TV contract with the Sydney TV stations. Recently 2CC were forced to stop broadcasting Raiders games because an outfit called Croc Media in Sydney bought the rights and sold them to 2GB. There’s always some faceless corporation interstate which wrecks things for us in Canberra, it is part of sport unfortunately.

Who is going to take the pay cut if the Rugby is shown free to air??? And Rugby people who are bashing rugby – maybe they’re not engaged? Maybe the product isn’t as good as it was or could be? Maybe there are better options for Rugby people to spend their money on? Maybe rugby could look after it’s supporter base by investing in grass roots and acknowledging volunteers? Maybe instead of the professional arm of rugby always holding their hands out for more money maybe they could put some time and effort back into the kids?? And don’t get us started on the finals structure of the Super Rugby competition…. we don’t compete with the other conferences but somehow off-the-pace Australian teams host finals against superior and better placed teams. Out of touch commentary from the coach….

The pay cut? The one that won’t occur because advertising revenue will increase? Or the one that will be there over the next ten years as the sport loses another generation who haven’t grown up on it because their family doesn’t have a Fox Sports subscription to watch 20 games of rugby over 12 months?
I agree – the product isn’t as good as it once was. The “once was” occurred in the late 1990’s and early 2000’s – when it was on free to air. Since then – when it went to paid subscriptions, we’ve not had the quality or interest come through from the grass roots you passionately mention… could it be those grass roots are dying as they don’t get to watch it each weekend anymore?
And the structure of the competition – you’re talking about the overly complex one that was introduced for marketing purposes since… it was sent to private viewing and the marketing became more prominent?
The coach is dead right. Bring back the free to air and you have more volunteers, a broader grass-root level, which will increase interest, which increases the number playing, which increases the quality and number of people able to be selected, which increases Australia’s standing in the world to a level not seen since… it was free to air 20 years ago.

bikhet - 36 minutes ago
A pox on them! They are a blight in Civic and they want to spread them elsewhere? View
Opinion 63