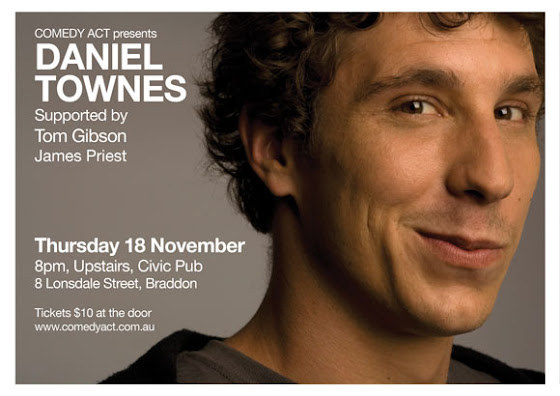 Comedian Daniel Townes has been seen on Good News Week, Stand Up Australia and the NRL Footy Show, and this Thursday night he will appear in the flesh at Civic Pub in Braddon.

Daniel Townes began performing comedy in late 2003 and since emerging on the scene as one of the countries hottest comedy prospects he has taken his gags global. Based in Sydney and sometimes London, Townes is one of Australia’s youngest International Comedians having performed in Singapore, Germany, Spain, Ireland, South Africa, Canada, Holland, and all over the UK.

Vanessa Schultz - 4 hours ago
Too young, and always a happy football mad kid, I grew up across the road in Hopetoun Circuit Yarralumla from the McInnes RIP View
Carol Jean - 14 hours ago
So sad, a true gentleman View
Stephen Keir - 17 hours ago
Sad news Always polite and genuine. View
Opinion 48

James Dof - 12 hours ago
I take the bus to get to the bus terminal with luggage and like I said it's 45 mins to civic and an hour less travel on the b... View
Julie Macklin - 12 hours ago
James Dof A bus every 15 minutes from Civic. In practice thought I imagine most people, even if there is a regular bus from w... View
James Dof - 16 hours ago
For me to catch a bus from Macquarie to Kingston it would be an hour and a half and an hour slower slower on the train than t... View
Food & Wine 135

Sylvia Brooker - 19 hours ago
Thanks Leong kitchen, you will be missed by many. All the best for the future. View
Property 5

Police are looking for a man and a woman after a shooting at a home in Dunlop on Saturday night (30...
Sport 6

Only injury prevented Mark McInnes, a towering back-rower, from playing for the Wallabies. The man known to all and sundry...
Business 12

After a political brawl of epic proportions between John Barilaro and Andrew Constance, the Liberal Party's Eden-Monaro preselection process has...
Food & Wine 135

@The_RiotACT @The_RiotACT
The Raiders marked Josh Papalii's 200th game with the Green Machine with a 22-6 win over the Storm in Melbourne. It's the Raider's best season start in 15 years and already has fans dreaming that Ricky's men can go one better in 2020 https://t.co/v64nqFaA2Q (1 hour ago)

@The_RiotACT @The_RiotACT
While we can't gather together to mark Reconciliation Day, there are plenty of ways to start conversations and reflect on reconciliation as a community https://t.co/MZqyHdBf2V (2 hours ago)

@The_RiotACT @The_RiotACT
The launch last week of the ACT Government's Age-Friendly City Plan has come at a crucial time for Canberra's senior citizens, with the COVID-19 crisis highlighting issues that many in the national capital refuse to acknowledge, says Ian Bushnell https://t.co/Cudpndvc2c (5 hours ago)