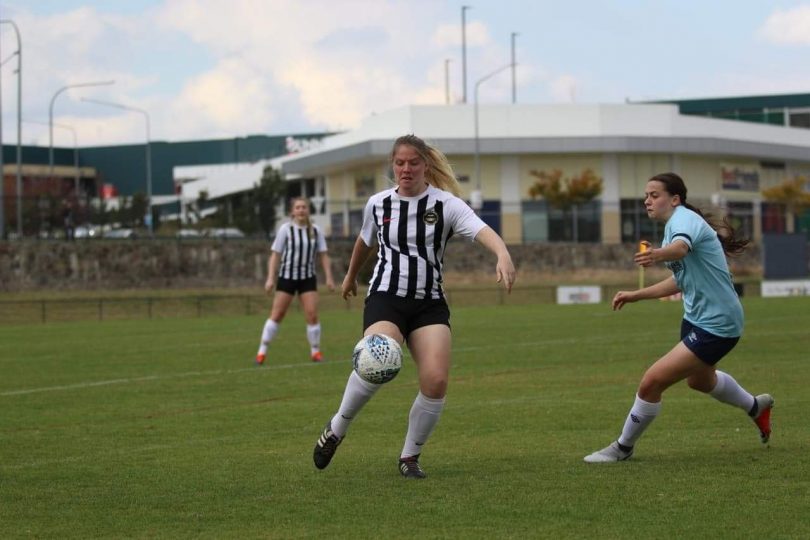 Female Football Week is back in the nation’s capital between 8 March (the start of International Women’s Day) and 15 March, highlighting the relentless strides women have made in the sport and to welcome a new generation of girls and women into the football community.

Now in its sixth year, Female Football Week aims to grow female participation in football at the grassroots level (according to Football Federation Australia, women currently make up 21 percent of Australia’s participation base).

Female Football Week also allows anyone from the Canberra community to visit events and get a taste of how the women’s game is evolving and growing around the country.

The 2020 event will see each Member Federation around Australia host their own event as associations and clubs within the Canberra region will look to get involved in a variety of activities that range from football festivals, coaching and refereeing courses, MiniRoos for girls, kick-off programs, and W-League and Matildas signing sessions.

Brindabella Blues FC will be hosting ‘Bring a Friend And Come and Try Evening’ on Wednesday, 11 March between 5:30 pm and 7:00 pm at Calwell playing fields.

Rachael Corbett plies her trade in the Women’s National Premier League (WNPL) for Gungahlin United and is one of a team of leaders in the squad, alongside Kailey Tonini, Maddie Perceval, Alex Paterson, Ruby Gambale and Erika Pennyfield.

Corbett explained that the women’s game is continuing to grow, particularly in her region.

“It’s getting bigger and bigger every year, but we still have a long way to go,” Corbett said. “It would be great to see the participation rate grow and I know there are a lot of people in the Gungahlin region with young families.

“The club will promote that and get young girls interested in the club and provide them with opportunities from our premier league programs and pathway developments.”

The fact that Female Football Week sheds a glimmering light into the evolution of women’s football is something Corbett appreciates but wishes there was more of it.

“I think it’s good to get awareness out there and we have this period to really target, promote and advertise it to everyone,” Corbett stated. “It’s a good way to celebrate the achievements of females in the region, it would be great to celebrate it every week honestly!”

As a young girl, Corbett aspired to reach the level she is playing at now. As the sport has grown it’s allowed her to become the role model sports need to inspire the next generation.

“I remember when I was in the junior program and I saw the premier league girls and I said to myself I want that to be me one day,” Corbett said. “The kids get to walk out with us at home games during the season and I think that is a really good opportunity for us to get to know them and for the kids to have someone to look up to.

“It really has come a long way since I was young because I didn’t have these types of opportunities or nowhere near as many as there is now,” she said. “But we have a really good committee now and they are able to help promote the game.”

To find out more about Female Football Week activities in your area, visit FFA.

Rach is a terrific role model for young girls in her club (Gungahlin) and more broadly. She has coached with the Coerver program for years (including overseas), played futsal at the highest level for Boomerangs FS – including the F-League (national league) when it was a thing – and continues to grow and develop her leadership skills. A more worthy inspiration for young girls you would have trouble finding.

Craig Elliott - 5 minutes ago
Just don’t plant Gums… plenty of over better street trees View
Gertraud Bell - 21 minutes ago
Chris Montgomery people are planting eucalyptus trees in their gardens, not realising how big they grow or that they are pron... View
Martyn Noakes - 1 hour ago
Brian Ashcroft have you been along the cycle track along the creek in Evatt and Flynn, huge eucs with deep roots in covered a... View
Sport 1

Capital Retro - 4 hours ago
Good luck with that. I suggest you read up on "social disamenity" from waste odour and commence a class action against the AC... View
News 240

Trudy Anais McInnis - 15 hours ago
I hated Triple J in the 90s and I love it now. Thank goodness it’s changed! And millions of votes led to The Wiggles coming... View
Monty Ki - 17 hours ago
Onelia Herriot that's my husband, for sure. View
Food & Wine 20

@the_riotact @The_RiotACT
Meet Joel Tyrrell - who after touring the world playing #music is now operations manager at the new @TransitBar https://t.co/v9SjttwQjF (53 minutes ago)