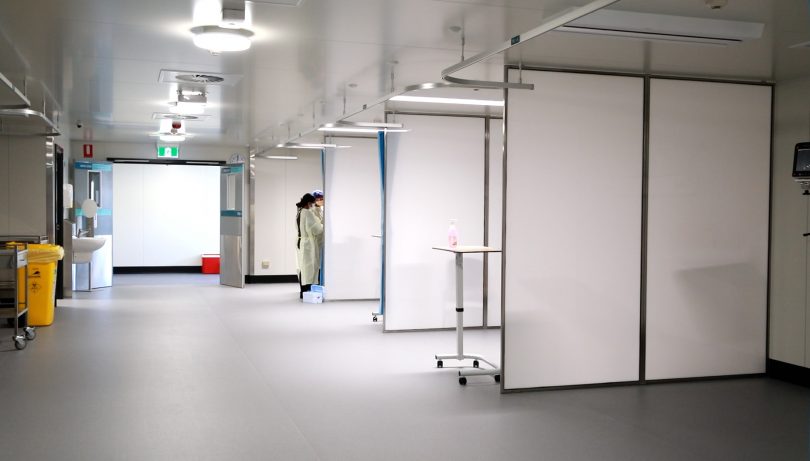 The Garran Surge Centre has thankfully not had to be activated. Photos: Michelle Kroll.

The Garran community won’t be getting their oval back any time soon, with no changes planned for the COVID Surge Centre, despite the ACT being virtually free of the virus for many months.

”The Surge Centre is a key part of the ACT’s COVID-19 response plan, helping to boost our capacity and enhance our ability to respond to the pandemic,” he said.

The 50-bed facility, designed to prevent the ACT health system being overwhelmed, has lain virtually unused since it sprang up on Garran Oval adjacent the Canberra Hospital in May last year, apart from being part of the ACT’s testing network.

The ACT Government contracted local health services company Aspen Medical to deliver and run the facility, which was designed in partnership with the World Health Organisation.

Mr Peffer said the government shared the cost of the build and operation of the Surge Centre 50/50 with the Commonwealth, and current operating costs were minimal, consisting of minor utility and cleaning services.

It’s the bespoke medical facility the government hopes to never use but it has also been labelled a white elephant by some commentators.

Late last year, it may have been thought that the facility could be dispensed with as COVID-19 appeared to be under control not just in the ACT but elsewhere in the country as well. 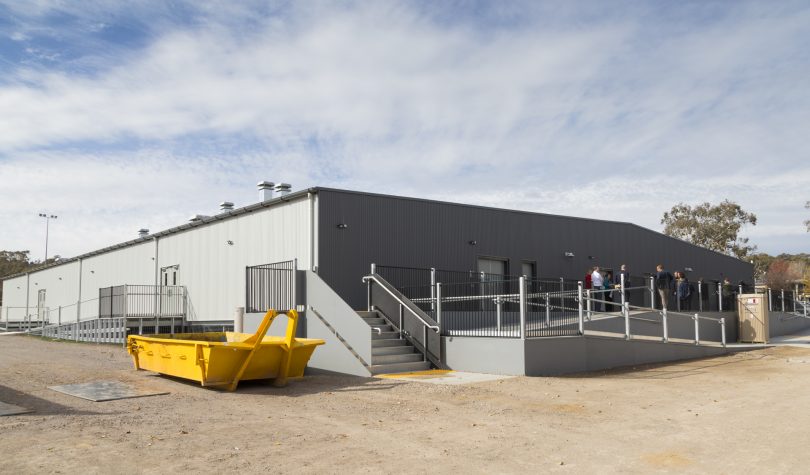 The front of the pop-up Surge Centre, built by Aspen Medical.

But the outbreaks in NSW and then Victoria have again changed the COVID-19 landscape, posing new threats to public health and the economy, although Mr Peffer said there had been no plans to reassess the centre’s future and the new situation had not played a role in that view.

The emergence of the more contagious UK variant of the virus also presents a potential new phase of the pandemic if it manages to gain a foothold in Australia, so it seems the ACT Government has little option but to keep the Surge Centre open and available for any eventuality.

As well as being a testing centre, the facility is also being used for fit-testing masks for CHS staff.

”Future uses for the facility will be a decision of government,” Mr Peffer said. ”It could potentially be used for training or simulation exercises to ensure that staff are well prepared in the event of a surge in infection.”

He said no decision has been made on whether the Surge Centre would be used in the roll-out of a vaccine, but its cutting-edge design means it could be suitable to play such a role.

While the government would continue to keep the Garran community posted, the current arrangement remained open-ended.

”The ACT Government has always assured the Garran community that the COVID-19 Surge Centre is a temporary facility, which will only be in place while the public health threat exists,” Mr Peffer said.

”It is not possible at this time to predict how long this will be. Once the centre is dismantled, Garran Oval will be remediated.”

Mr Peffer said a decision on the future of the facility, which can be dismantled and stored or moved in containers, would be made once the Public Health Emergency had passed.

Rent it to NSW

Send it to England

So white, so big, it’s like an elephant….but no nearly as fun….

Good. The virus hasn’t gone, nor should the surge centre.
Maybe a vaccine centre

Just chuck off the kids of Garran Primary school.
Take away their school oval.
Remove their sports field.
Destroy the community’s oval.
Spend twenty-three million dollars of ever rising rates on an unused monument to fear and paranoia.
It is not an an insurance policy. It is a destructive, extravagant, self-indulgent waste of taxpayer’s money.

Unfortunately I feel that we are just entering the real COVID dilemma! I count my blessings that we live in Australia and willing to do the hard yards! Maybe we should build more? Just in case . My opinion.

Chris Goodrum agree – the risk of the new UK and SA strains exploding here seem great. That people seem complacent in so many regions doesn’t help…

Chris Goodrum it will probably be used as an immunisation centre very soon.

Hey, this thing isn’t over yet! It’s definitely invaluable insurance … in my humble opinion.

Leave it and let’s hope we never need it

I’m happy for it to just sit there. Hopefully, it’ll never be needed 🤞🏼

Use it to reduce the waiting times across the road

Might be needed for a surge in child deliveries.

The surge centre is like a parachute, if you don’t have one when you really need it, you’re screwed

Why can’t it be utilized in the meantime to help take some if the pressure off the ED ?? This not only means ed beds freed up but the facility could be used for staff training.

Joanne Clark you need staff to do that and that’s what’s lacking. A bed is not a bed, it’s a staff member to care for the person they want to put in that bed.

The COVID19 surge centre will make a great vaccination centre.

I supported it being build ready, services in place, all approvals signed off and then fast build if and when needed. Never copped so much abuse on a post ever. Stand by what I said.

Sound measure. Well worth it.

Valuable insurance and could be utilised for training purposes

Do you insure your house??

Rooster James Vast majority do. Unfortunately there are always a minority that don’t and claim it’s wasted money then blame everyone else when it all goes south.

If it had been required and wasn’t there there would have been an outcry. It still might be needed.

Matthew Windebank Completely agree. Wonder if it might be viable as a vaccination centre for the ACT? Possibly a good site for the uber-freezers the Pfizer vaccine will require.