Crank up the dirigible, don your top hat, and be in Nimmitabel this weekend for Steampunk@Altitude 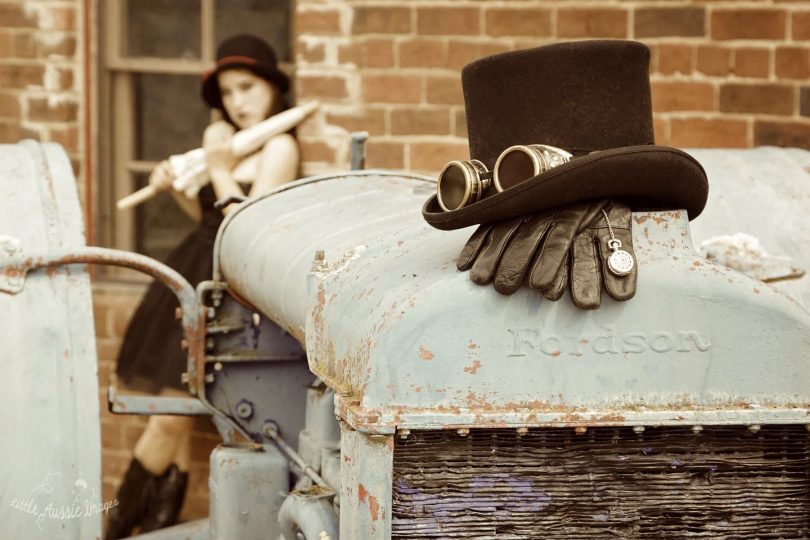 Grab your parasol and head to Nimmitabel this weekend for Steampunk@Alititude. Photo: Beth Cole.

What is a Steampunk, I hear you ask?

It is a blend of the Victorian era and technology with a dash of science fiction and fantasy. Think of airships (dirigibles), goggles, jet packs, corsets, top hats, parasols, combined with imagination, clockwork cogs and a sprinkle of whimsy.

And it’s taking over to Nimmitable this weekend.

Back in the Victorian era, Steampunk literature (a term coined in 1987) would have been known as ‘scientific romance’, stories of adventurousness and amazing technologies and inventions as imagined by writers of the day – inspired by steam-powered machinery.

In these works, mad scientists abound and female characters defy social expectations being seen as equals to male characters, despite the fact that this wasn’t the case in the Victorian age. It is also rooted in that era’s perspective on fashion, culture, architectural style, and art.

Some of these imagined technologies may be machines like those found in the works of H.G Wells and Jules Verne.

Think ‘Journey to the Centre of the Earth’ and ‘The League of Extraordinary Gentlemen’, Lemony Snicket’s books, or ‘The City of Lost Children’. The common thread is science and technology, including clockwork, steam engines, and occasionally powered flight, but only in the context of dirigibles (blimps) and airplanes with propellers.

And of course, there are the costumes.

More than just a sub-genre of science fiction and fantasy, Steampunk now extends into fashion, engineering, music, gaming, and for some, a lifestyle.

You can recognise a Steampunker by their clothes; women with corsets, bustles, hoop skirts and parasols, and men in tailored suits, rippling trench coats, and jaunty hats and accessories such as fob watches, gloves and canes. And speech is formal and polite. 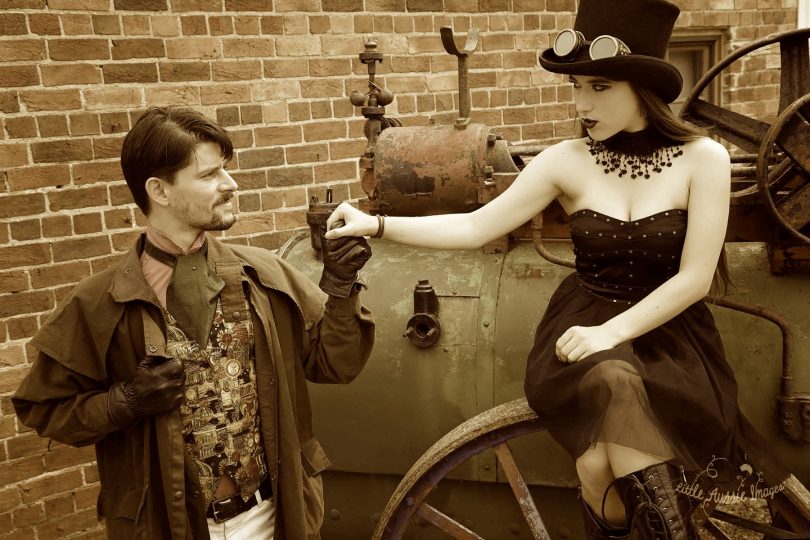 “Today Steampunk encompasses a sizeable fandom and an entire subculture. There are steampunk-themed conventions and other events, and fans can spend huge amounts of time, energy, and money coming up with cosplays that combine the most romantic elements of Victorian fashion with bizarre contraptions made of gears and clockwork,” says the Ministry for Peculiar Occurrences.

And celebrating all this is what Steampunk@Altitude is about. Historic, charming Nimmitabel, on the Monaro plain, plays host to a weekend of dress-up shenanigans, music, contraptions, and activities for all ages.

Over this Saturday and Sunday there will be loads of vendors in Pioneer Park, Steampunk films in Pioneer Memorial Hall, teapot duels, gaol tours, parasol duels, live music, fashion parades, circus from ‘Brothers On Fire’, and a Saturday evening dance and award ceremony with music from ‘Littmus Steampunk Band’. The Federal Hotel also has live music and on Sunday at midday a poetry slam.

In case you were wondering, the term Steampunk was coined in 1987 by author K.W Jeter, who wrote the novel ‘Infernal Devices: A Mad Victorian Fantasy’.

In this story, ‘George’ discovers his father, a clock-maker, had been experimenting with building clockwork humans, finishing with an automaton which is an exact double of George himself, but which possesses superior sexual abilities and a skill with the violin comparable to Paganini. He is in a London which is inhabited by hybrids of humans and fish, and English citizens who possess a device which enables them to view what is, for them, the future.

Interested in taking part this weekend? Simply head to Nimmitabel, southwest of Cooma, and wander around. The whole town is involved over May 4 and 5. From 10 am each day. No tickets but they’d love you to dress up and be part of the theme.

Check the Steampunk@Altitude Facebook page for the full program.

Maya123 - 2 hours ago
So you work in this area of research and know more than those who are studding it? Science is evolving as more is learnt. Whe... View
Capital Retro - 3 hours ago
Climate change was happening when this old denier went to school - we studied it as a natural thing. In fact, it has been hap... View
Maya123 - 5 hours ago
More realistic of them to accept that climate change is happening and not ignore the research of those working in the field a... View
Business 24

Jeff Smith - 4 hours ago
Did you know the small Taylor public Primary school in Kambah is above capacity whilst the nearby combined Primary & High sch... View
Kathy Sepulveda - 6 hours ago
Jessie Nicho I'm a little late to this but I agree with you 100%. All the money is going into the Northside Public Schools an... View
Sport 2

Steven Campbell - 8 hours ago
Reducing posted speed limit is simply government’s way of running away from their responsibilities. Laws are only as effect... View
show more show less
*Results are based on activity within last 7 days

@The_RiotACT @The_RiotACT
Remember looking through records at Brashs in Woden Plaza? McIntyre Property's Colin Blunden shares such memories of growing up in Canberra https://t.co/FmO0QXMUUv (44 minutes ago)