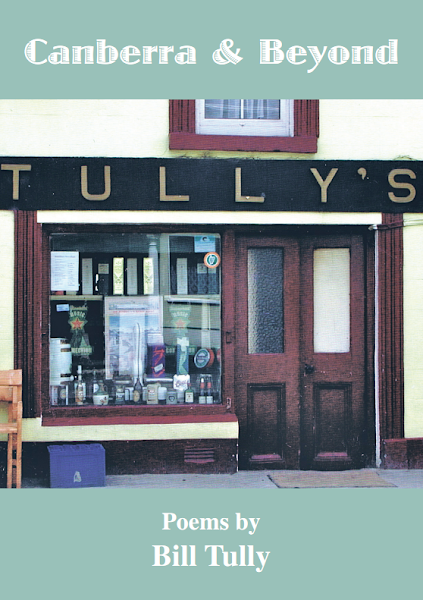 Canberra and Beyond, Poems by Bill Tully

It’s almost a cliché that if you shake a tree in Canberra, a poet will fall out. It’s the other side of the public service, I think. Where one is a serious, document-based day-time activity, the poets come out at night like wordy possums, with their scratchy little ways.

Bill Tully has lived two-thirds of his life in Canberra, and he is not what one could call young, so there is a wealth of history in the book. He currently edits Voice, a small magazine produced by Ginninderra Press (from their new home in South Australia, alas!), and is something of an stalwart of left-leaning politics. These poems do deal with political issues, but also with outdoor public toilets, buses, the Canberra Centre and Lake George. In other words, everything Canberry is here, explored in short, often humorous poems.

Tully is unusual amongst modern poets in that most of his poems rhyme. In his poem ‘Centrepoint’, for example, he traces in solid rhyme the history of this building, from its heyday to its state today, where many shops are closed:

The building and the croissants are linked by the strong rhyme, which hooks the reader into following him through the rest of the poem.

Tully’s intention is to clearly communicate his view of the world in these short poems. He is not interested in abstraction or difficult language. He is certainly aware of poetic history and innovation; he writes a poem about Christina Rosetti and includes some prose poems. But what interests him most is what he sees around him; not least the fate of many public toilets:

‘…Time to replace these value-neutral dunnies
With drink and cig stalls run by churls as drug-dispensing dummies’.

Rhyming ‘dunnies’ and ‘dummies’ shows that Tully is not afraid to put humour at the front of his poems, on open display, and not in a plain wrapper.

Tully is a too fond of the exclamation mark for my taste, and I occasionally found this distracting. Similarly, the rhymes were sometimes a little forced. But I would recommend this book as a present to fairly broad-minded visitors to Canberra, and most of all to locals who want to see their city’s concerns reflected in a refreshing way, with a fair sprinkle of humour.

Most poems about Canberra tend to be rather dismissive, but this book is written by a man who has been fully engaged in the city’s concerns for many years. His interests and passion shine through on every page.

I bought my copy of Canberra and Beyond at Smith’s Books, another Canberra icon, opposite the post office in Civic. It cost $18.95.

Valerie Foster - 48 minutes ago
Been talking about that for years. View
News 7

Inca Serrated - 58 minutes ago
Not a single mention of the conditions that prisoners are living in... Lockdowns, no family contact for over a year, no meani... View
Lori J Tas - 3 hours ago
Kriso Hadskini there are currently rules around how much the govt can enforce people to pay back week to week, sadly, given h... View
Kriso Hadskini - 4 hours ago
Make the inmates pay the bills they cause, it is not rocket science.... View
Community 35

Mark Heinrich - 1 hour ago
These things are not either or. There’s a need for multiple solutions to multiple problems. Don’t knock something just be... View
Cameron Murtagh - 2 hours ago
Abbey Snell https://domesticviolence.org/domestic-violence-against-men/ View
Cameron Murtagh - 2 hours ago
Something wrong with public housing for men too? View
News 11

Not that long ago, my partner and I were part of the teeming masses of young people trying to get...
News 103

@The_RiotACT @The_RiotACT
Around 250 people enjoyed a strip and dip in freezing temperatures this morning for @Lifeline_ACT's fifth Winter Solstice Nude Charity Swim! Were you there? https://t.co/8AcpLjpUyp (53 minutes ago)