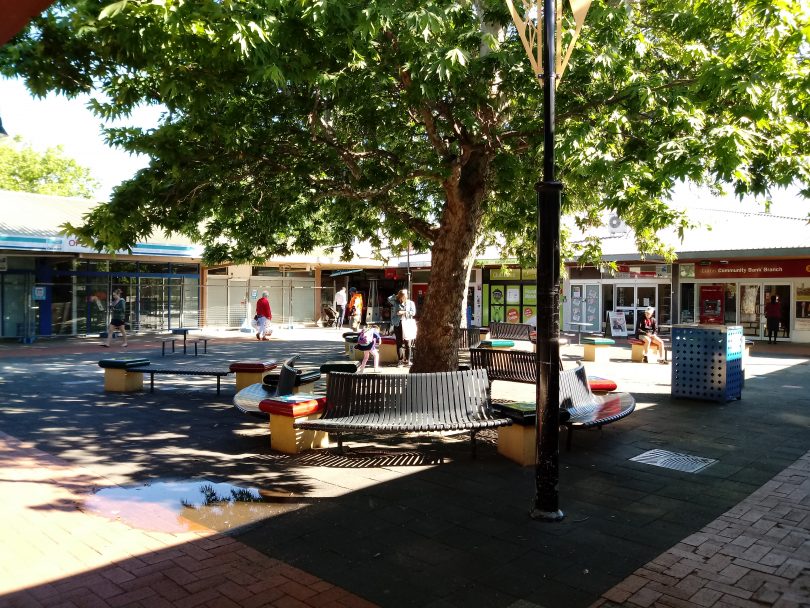 The central square at Curtin shops will be protected by a one-storey limit on three sides. Photos: Ian Bushnell.

The Curtin community has welcomed the just-released Master Plan for the inner south suburb but warns the Government that if it fails to stick to its own planning policies, particularly to do with the shopping centre, it will face a hostile reaction.

The community has been engaged in a running battle with the Haridemos family, which is seeking to redevelop a section of the shops into a multi-storey block that many fear will overshadow the centre’s much-loved central square.

The family had wanted to go as high as six storeys but after significant opposition revised its development application last August down to five storeys. It also evicted tenants and fenced off shops, rousing the ire of the community.

Curtin Residents’ Association president Chris Johnson said the Master Plan captured a lot of what the community wanted in terms of character and ideas about what the suburb should look like.

“But if it [the shops’ development] doesn’t work according to the Master Plan, if they [the developers] try to weasel out of it saying they put in the application before then, then there may still be opposition to what they’re doing,” Mr Johnson said.

“Enforcement is very important here. If they [the Government] waste all the effort that went into consultation and making the plan and say they’re not going to enforce it properly, then there will be a lot of community opposition.”

Mr Johnson said building height restrictions around the shopping centre square had finally worked out well with the one-storey limit around three sides, and the fourth set back on the south so the square could still receive sufficient sunshine.

According to the Master Plan, the proposed five-storey block of shops and units on the south-west corner would be allowed but Mr Johnson warned that the details were important, with the latest DA showing the building’s tallest part three metres forward of where the Master Plan would have it.

Each metre meant several metres of shadow in the square “so they were really working right on the edge … so they have to be kept under some detailed scrutiny”, he said.

Mr Johnson believed the developers and the planning authority had been talking to each other but the community had not seen anything since August.

“We think there’s been some changes since but the nature of the process means that we the public don’t get to see what goes on in those negotiations,” he said.

Mr Johnson said the square at only 25 metres across could not sustain any sizable buildings on its edges, and keep its character.

“Any development should be more imaginative, and saying how do we build on that [square],” he said.

As for all the talk about placemaking: “This is a place, it’s already made, don’t break it.”

A spokesperson for the developers said the Haridemos family did not wish to comment at this stage. 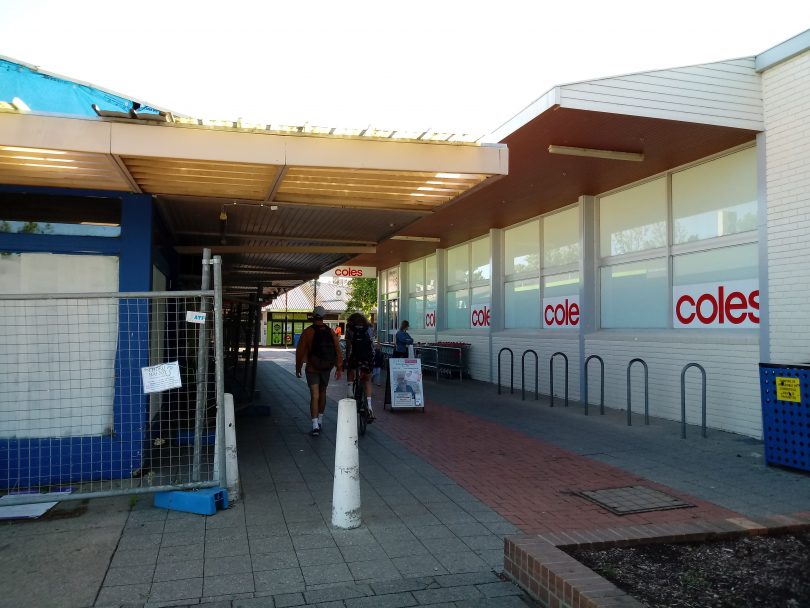 The fenced off south-west corner of Curtin shops.

Mr Johnson said the Master Plan covered issues about car parking and waste management, and the idea that you could link up the green spaces was nicely expressed, but again it was important to see how the planning recommendations were implemented.

A proposal for multi-level affordable housing up to six storeys on the vacant block on the corner of Theodore and Carruthers steets was welcome, if done sensitively and carefully.

Key recommendations included protecting the value of the central courtyard as a focal point for community activity and balancing new opportunities for development that maintained the centre’s village character.

“The unique feel, central courtyard, walking and cycling connections and the variety of shops and services included in the Master Plan have been well received by the local community during the engagement process,” he said.

“Community members have played an important role in the development of the Master Plan, including through the Curtin Community Panel, which discussed how development could be introduced over time while maintaining the centre’s village character.”

Improvements to public spaces and to neighbourhood walking and cycling routes to support community activities and business were also key recommendations.

The busy car parks at the shops are to be retained but the Master Plan recommends they be redesigned to create more spaces.

“I would particularly like to thank the local community for their input into the development of this master plan, with over 800 people attending ‘meet the planner’ sessions, almost 400 schoolchildren attending workshops, and over 500 pieces of feedback being sent in throughout the planning process,” he said.

The final Curtin Group Centre Master Plan can be viewed at www.planning.act.gov.au

I’m always impressed by how much effort these ‘community councils’ go into trying to hide their actual agenda. Nobody has ever referred to that square as being ‘culturally important’ – it has always looked awful. Do they really think people don’t know they are simply against the development because ‘mah property values’?

Congratulations Curtin residents! You have done a great job to save the sun in the square for the future of the community. Unfortunately the Woden Precinct Code allows 28 storeys around the perimeter of the Woden Town Square and Southlands draft Precinct Code has 4 storeys on the western edge of the little square, leaving very little sun in winter afternoons. Why can’t we all have good outcomes in our public areas?

Belinda Maiden - 4 minutes ago
I’m new to Canberra and have been surprised to find that: * P-platers seem to be allowed to drive at twice the posted speed... View
Alex Kearns - 12 minutes ago
More presence might send a deterrent message. The current on road presence is minimal so the deterrent effect is minimal. The... View
Ben Foley - 40 minutes ago
Jane Saillard there is a psychological factor that makes people drive faster in low visibility. Driving is too recent for us... View
Property 23

Marty Hoenig - 17 minutes ago
They have to drink beer in CF because they sure can't drink the water! View
Mick Gaffey - 9 hours ago
Just buy it already Jason Barton ✅ View
Amanda Sanderson - 13 hours ago
I’ll give you bottomless gin and tonics Peter Taylor 🤣 View
Property 14

Jason Hutty - 9 hours ago
Tim Van Der Vlist I'm not sure if you understand the economics of a member's club. The members own it. So yes, of course they... View
John Sands - 11 hours ago
John Ryan Steve Boege just means you should go to 19th hole and think about how you would have played... View
Fiona Wright - 11 hours ago
Irene Kelly greenkeepers made a mistake on the greens (in the article).. View
Breaking 5

chewy14 - 10 hours ago
You're assuming what he's saying is correct though. Whilst they do have controls to prevent vaccine "shopping" for people not... View
HiddenDragon - 13 hours ago
John Moulis' experience illustrates a serious flaw in the vaccination program. With the "advice" (a rather dishonest way of d... View
Maya123 - 14 hours ago
I should add that my mother also had AstraZeneca, but had no symptoms. So it varies from person to person. View
News 21

New road safety cameras on Northbourne Avenue and Barry Drive in the city have identified around 5000 motorists exceeding the...
Opinion 174

@The_RiotACT @The_RiotACT
Avoiding the main roads can be a false economy and a curse on neighbourhoods, says former rat runner Ian Bushnell https://t.co/Utlb3tlmeb (25 minutes ago)

@The_RiotACT @The_RiotACT
Find you're already stuck for ideas to entertain the kids over the school holidays? Look no further for inspiration, with workshops to tours and nighttime fun https://t.co/4Ey9eKhGEt (10 hours ago)