Day night cricket at Manuka Oval. A review of sorts 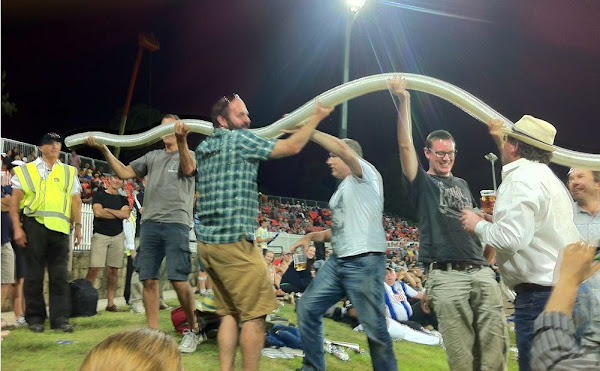 A man couldn’t have asked for a better way to spend a birthday.

A cracking game of cricket with the home side getting home and over 640 runs scored.

An afternoon and evening sitting on the grass on the hill with friends and a very great amount of beer.

The lights at Manuka were magnificent.

Sadly the catering was not up to scratch with the beer lines ($6 for mid strength) long and slow.

Astonishingly at one point they managed to run out of bread rolls without running out of kranskys which is a rookie error of huge proportions.

Security was also, in my view, heavy handed with at least one friend booted out seemingly for no greater crime than constructing a hat from a beer tray (we smuggled him back in through another door).

(I’d like to note I personally had no interactions at all with security. Although they did confiscate our beer snake because apparently it looked like too much fun.)

The ticketing was also a shambles with the systems not at all in place to handle the plethora of e-tickets (you can’t tear the end off a punter’s phone). People turned away for lack of a ticket would not be thrilled to learn others just walked in without any ticket at all.

So management has a very great deal to improve.

But it just doesn’t matter.

Because watching cricket by night at Manuka Oval is magical.

If you want to hear about the game Foxsports have this:

But for a more crowd-centric take on proceedings here’s something I knocked up:

ACT Policing had this to say:

Operational Commander for the event, Sergeant Matthew Corbitt said the crowd was generally well behaved with thirteen people being ejected for being intoxicated and behaving in an unruly manner.

“It was a great turn out considering the early unfavorable weather,” Sergeant Corbitt said.

“The good behaviour of the crowd allowed people to have a safe and enjoyable time and it was definitely a family friendly environment.”

There were no arrests made during the match.

Anyone would’ve thought they were Rattlesnakes the way security was reacting.

Never having been to an AFL game, I’m tempted.

Manuka is a good little venue, but for a proper AFL experience, you just HAVE to go to the MCG for a Traditional Big 4 game – Collingwood/Carlton/Essendon/Richmond.

In saying that, Manuka under lights with a sea of orange and grey members caps could be good fun this year.

AFL tickets go on sale tomorrow. I would expect a “small crowd” (for some) to go close to another sell out.

Never having been to an AFL game, I’m tempted.

AFL tickets go on sale tomorrow. I would expect a “small crowd” (for some) to go close to another sell out.

mortgaged house to make it 😉

I had a good time too. Nathan Lyon even popped (near)by for a chat, which was nice and attracted a bit of a crowd. Turns out he was keen to play in the match, but commented along the lines of “I wanted to play in this match, but Julia didn’t pick me. Perhaps we need to vote for someone else.”

So maybe we have Lyon to blame for the early election announcement?!

Anyone would’ve thought they were Rattlesnakes the way security was reacting.

Albeit security confiscated JB’s beer snake just before I got this creation of beelzebub.

Hmmm, hoping they get rid of the fun police before Wednesday’s match!

Cracking day and the lights were fantastic.

What’s the problem with beer snakes?

Hang on, isn’t that the same anti social behavior as witnessed at Summernats?

Or is it OK because it is cricket?

Disclaimer: I am not really a Summernats fan, just pointing out any hypocracy that may arise in this thread.

David Keir - 31 minutes ago
Don’t worry about the homeless men View
Lilly Walter - 58 minutes ago
Wayne Williams, bloody oath they do. More manipulative and cunning women are. If I had the fund or patience to create a men o... View
Wayne Williams - 2 hours ago
Lilly Walter tell that to the recently fatherless young fella in Brisbane, women commit family violence also View
News 10

brianf - 56 minutes ago
The stats I've seen suggest about 90% of accidents between cars and 'vulnerable road users' (cyclists and pedestrians) are th... View
paservank - 2 hours ago
...or get rid of all the cars? (an equally stupid and self-centred idea) View
Community 24

Canberra’s Summer of T20 is something to get excited about