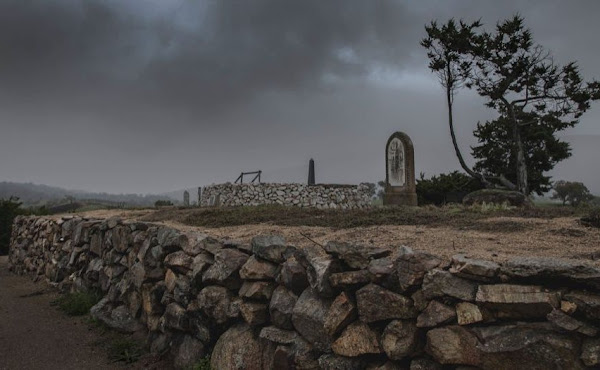 Territory and Municipal Services are sharing the news that their rehabilitation works at the heritage-listed De Salis Cemetery are now complete:

The ACT heritage-listed De Salis Cemetery, located on the banks of the majestic Murrumbidgee River at Tharwa, has been returned to the community after the completion of extensive restoration works, Manager of Operations, National Park and Catchments, Brett McNamara, said today.

“The De Salis Cemetery is a rare example of a 19th century pastoral station cemetery. It is of unique construction, comprising a raised circular terrace with walls of local stone,” Mr McNamara said.

“During severe storms in December 2010 and January 2011 the stone wall of the cemetery collapsed as the earth subsided. The walls continued collapsing due to recurring heavy rain in 2012 and the presence of wombat burrows under the site.

“Staff from ACT Parks and Conservation Service, ACT Heritage Unit and construction contractors have rebuilt and restored the walls using the collapsed stone in a pattern that replicates its original design.

“The raised site has been further stabilised by the installation of internal gabion walls (wire and stone reinforced blocks), the compacting of soil and landscaping to control rain run-off.

That should confuse the hell out of future archeologists.

That photo is brilliant, isn’t it? 😀 I’m generally not a big fan of photography as art, but there are some truly excellent exceptions.

What happened to the wombats? Are they now entombed with their hosts?

Brendo Collins - 52 minutes ago
Maybe cause no one went to this actual facilty it is closing. Maybe if you attended it might still be open. View
Mookie Moo - 2 hours ago
This is so disappointing. I have not used this facility, but I have done weekly aqua aerobics as my main form of physical fit... View
Anne Maree Crowe - 5 hours ago
I feel for these people who have lost their water aerobics classes. Many elderly and people with mobility issues rely on swim... View
Property 16