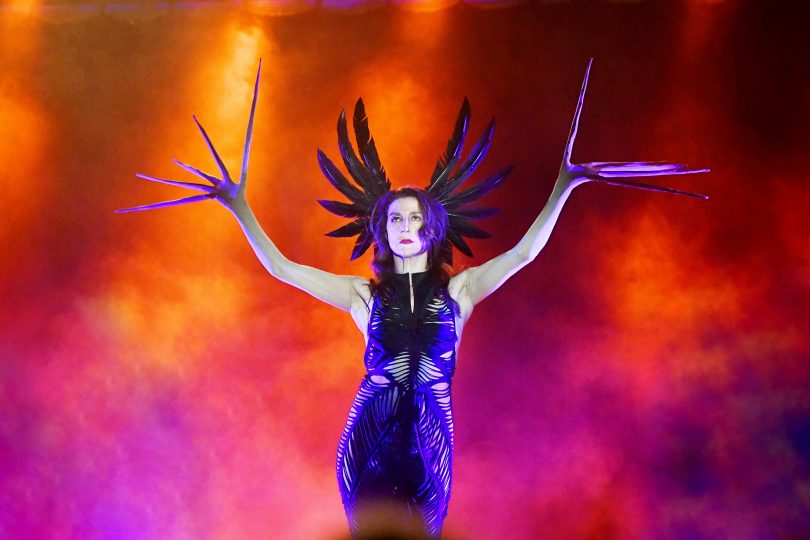 A “wild, provocative shindig” with everywhere from Buenos Aires to Bollywood in its creative pedigree is coming to Canberra. Finucane & Smith’s Dancehall is part of a deliciously extravagant (and naughty) late summer burlesque and cabaret focus at the Canberra Theatre, running from February 7.

Moira Finucane was the first Australian to present work at venues as diverse as the Havana International Theatre festival, in Argentina and Eastern Europe and she was the inaugural Creative Fellow of the National Gallery of Victoria. With her co-creator Jackie, Finucane & Smith have been acclaimed as national treasures for their amped-up, dizzying, complicated theatre carnivals.

The idea for the Dancehall production came to Finucane several years ago when she “started to fall in love with the idea of taking variety style and finding performers wherever we went, a sort of overproof cocktail of local and national superstars”.

In the Canberra Dancehall production, we’ll see the likes of Rockie Stone, a pint-sized circus artist who originally trained as a zoologist and can crawl up a cable with her fingertips; Las Vegas queen of burlesque Imogen Kelly and Paul Cordeiro who worked on the Sydney Olympics and was rehearsal director for Lion King.

Willow Sizer is the inaugural Dobell cabaret scholarship winner, whom Finucane says “has a voice like a 1932 gramophone coming out of this tiny person. It’s like you imagine Judy Garland being when you first heard her onstage”.

Finucane revels in the tag provocateur, first applied to her by a European critic who pointed out that the word’s origins mean “to invite, to stimulate and arouse, open up”. She says it’s a completely different approach to being shocking. “Provocation is a hyper-stimulating conversation that arouses thoughts, feelings and emotions.

“I think that entertainment is often looked down at as lowbrow. But I see it as an electric cable that can bring power anywhere. You open people up, make them feel relaxed and excited, open up their ribcages so that ideas can flow between entertainers and audience. People love going somewhere and being made to feel special.” Finucane & Smith’s Dancehall will feature a variety of entertainment, with a delicious twist.

But for cabaret and burlesque fans, the Dancehall production has plenty of “gorgeous old style feathers and tease”, Finucane says. Sporting wildly long spiky fingernails and extravagant costumes, she loves playing with the audience herself, creating spontaneous stories with words harvested from her audience and spinning “weird wild tales on the spot”.

And that electric intimacy is what Finucane believes is the key to a resurgence in her artform over the past ten years or so. “If you’re just after a big spectacle you can get that at home on a flat screen. But the intimacy that cabaret and burlesque offer the audience is just divine. You feel excited, provoked and special.”

For the past four years, Finucane has been travelling back and forth to China, directing theatre (she says that although her Mandarin is improving, there have been some interesting moments working with non-English speakers in rehearsal, best encapsulated by the warning “don’t try this at home”).

Among her achievements was The Flood, the first Australian drama to be presented in eastern China’s largest and longest standing theatre festival, the Shanghai International Contemporary Theatre Festival, followed by a season in the XiXi International Arts Festival, Hangzhou.

In Beijing and Shanghai, she’s worked with classically-trained actors, with Tibetan acrobats and avant-garde theatre-makers. Finucane finds the Chinese creatives incredibly passionate, but the work is challenging. “There is a big focus on perfection in China. I’m not interested in perfection – I want magnificence. We’re after human beauty in a visceral, reachable way.”

Finucane and Smith’s Dancehall is at the Canberra Theatre from 7-9 February. There are several show times and the 9:30 pm performance on Friday and Saturday “features a more risqué version of their notorious back room acts and deliciously rough edges. Perfect for the more daring audience members,” according to the show notes.

MERC600 - 3 hours ago
Well I guess if there won't be any concern of this leniency, and there will be no unwanted effects, we should see the same ap... View
Patrise Dowling - 5 hours ago
Current policy hasn't stopped or even abated the illegal drug business. Time to try something else. View
Paul South - 8 hours ago
If it works for Portugal View
News 1

@The_RiotACT @The_RiotACT
Missed out on your dream home at auction? Buyers are being urged to stay calm as emotions run high at #Canberra properties https://t.co/ZhRjJEH5ID (1 hour ago)