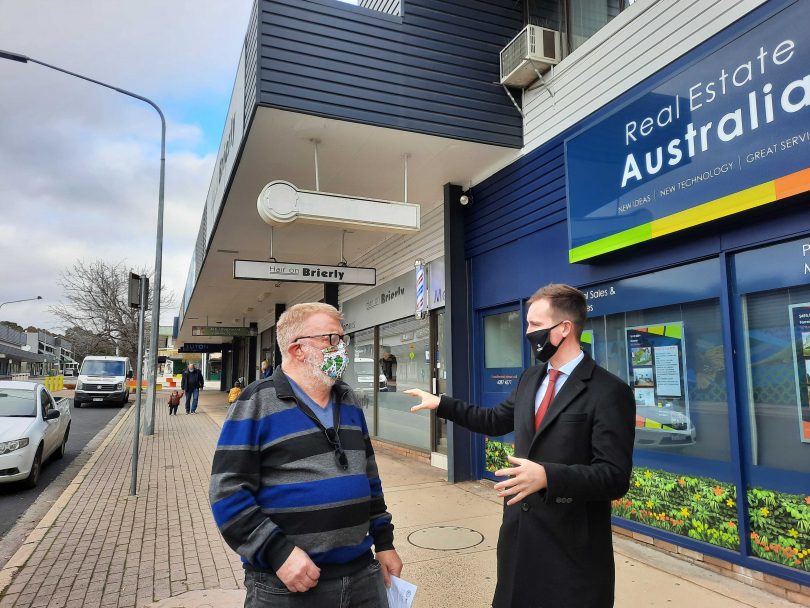 Minister for Transport and City Services Chris Steel and WCCC’s Bill Gemmell discuss what’s needed on Brierly Street at the launch of the community consultation in July. Photo: Ian Bushnell.

Design work for upgrades to the Weston Creek Group Centre’s main street are about to get underway based on feedback from community consultation.

According to the listening report published on the YourSay website, key desires were for improved amenities along Brierly Street including better seating, wider verges, lighting and more greenery.

Concerns were also raised about the lack of lighting, particularly at the pedestrian crossing on Brierly Street, and more play areas for children would be welcomed with respondents commenting that the lack of use of Trenerry Square could be partly attributed to the playground being on the opposite side of Cooleman Court.

Weston Creek Community Council chair Bill Gemmell said when the consultation was launched in July, the street had too many conflict points – particularly near McDonald’s, and this had caused a number of near misses and collisions. He said it needed to be calmed down, including having more pedestrian crossings.

Minister for Transport and City Services Chris Steel said Brierly Street was now a step closer to significant upgrades with more than 350 people sharing their views.

“We know locals think of Brierly Street as Weston Creek’s main street, so we’re looking at ways we can make the area more inviting, enjoyable for pedestrians and better for local businesses,” he said.

“We know how important involving the community is when planning improvements to the local facilities people regularly visit. We will be considering this important feedback, along with the early input we received on the Weston Creek Group Centre Masterplan, for future upgrade ideas at Brierly Street.”

Weston is one of 11 local shopping and group centres the ACT Government has committed to upgrading over the next three years.

This investment is part of a larger $28.8 million program of new and upgraded suburban infrastructure across Canberra including:

The ACT Government has also recently released final designs for upgrades at the local shops of Campbell, Duffy and Kaleen’s Gwydir Square, with construction expected to begin in early 2022.

“It’s been a challenging two years for our community and many local businesses across Canberra. That’s why we’re moving ahead with as many local projects as possible, to support jobs and help bring more vibrancy to our community spaces as we recover from the ongoing impacts of the COVID-19 pandemic,” Mr Steel said.

For more information on this project and to read the What We Heard report, visit the YourSay website.