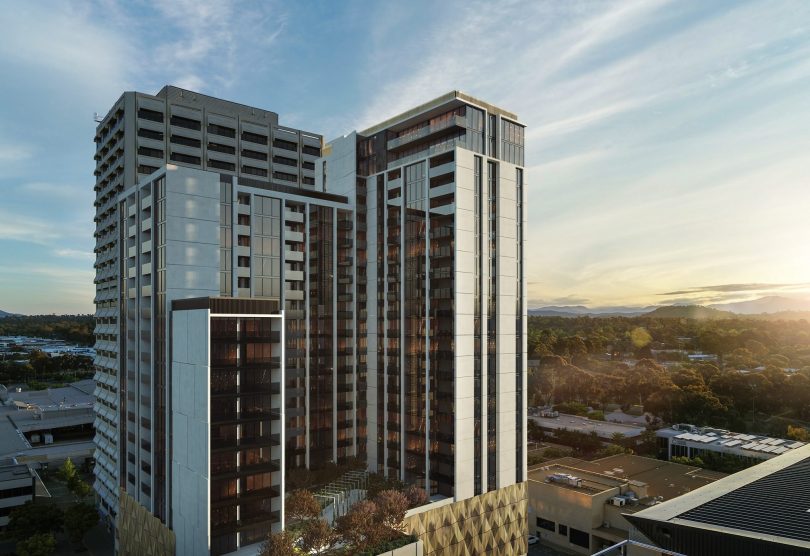 An artist’s impression of the W2 project in Woden. Image: W2 Facebook.

The developer behind the 24-storey W2 project in Woden has made changes to its proposal that returns it largely to that approved more than a decade ago.

The changes reduce the impact on the Town Square after the planning authority knocked back an amended development application in April.

Some of the changes in Keggins’ Reconsideration proposal also respond to the Notice of Decision which criticised the amended proposal for being poorly designed, its lack of amenity and failure to contribute to the revitalisation of the Town Centre.

The three-tower W2 project on the former Woden post office site, Borrowdale House, is a version of long-approved development application that was never acted on, a situation that the Woden Valley Community Council has long criticised.

The council strongly opposed W2 and the fact that a 24-storey building of that bulk and scale could be built so close to the Square and overshadow a significant public space.

But Keggins General Manager Brett Smith said the revisions significantly improved the proposal and would produce a better built form aesthetic, reduce the bulk and scale and minimise the impact on the Town Square.

“The revisions reduce the shadow impact to the Town Square by more than 50 per cent compared with the current approval – calculated at 3:00 pm during the winter solstice,” he said.

Keggins bought the site last October and sought to increase the number of apartments and make a range of changes.

The $75 million proposal for the 2229 square metre site was for 222 apartments, ground floor commercial tenancies and car parking on two basement levels – ground and podium levels 1 to 4.

The apartments would cover levels 6 to 24 in three tower buildings of 14, 20 and 24 storeys in height.

Keggins has made changes to the number, mix and type of units, the residential amenity, building configuration, massing, and scale; facade materials so they are less reflective and more attractive; and the building’s interface with the public realm.

W2 will now have a mix of 208 one, two and three-bedroom units – the same number as in the original approval, including 23 adaptable units.

It will no longer have 40 serviced apartments after failing to attract an investor in the current market, but has reinstated units to the podium levels as per the original approval.

The landscaped podium has been revised with bigger balconies and more space for semi-mature deciduous trees that will provide shade in the warmer months and sunshine during winter.

Car park numbers will be 240 with each unit having at least one space, as originally approved, and storage cages have been added.

Two banks of mailboxes have been added adjacent to the lift lobbies and accessible from the front of the building.

Mr Smith said the design team was confident it had appropriately addressed the Notice of Decision, with construction expected to be completed by mid-2023.

“On the back of an exceptional market response to this unrivalled offering in this landmark location, site establishment and demolition works are expected to commence next month,” he said.

However Woden Valley Community Council President Fiona Carrick described the changes as “mainly cosmetic” and said they did not address the fundamental issue that in 2010 the planning authority approved a development on the Town Square that just shouldn’t be there.

She said the ground floor, which should activate the Town Square, consisted mainly of residents’ car parks with a veneer of commercial around it.

“This development is going to diminish our public space,” Ms Carrick said.

She urged the ACT Government to offer Keggins a land swap to provide it with a more appropriate site such as the car park on the north-east corner of the Hindmarsh Drive/Melrose Drive intersection.

The Reconsideration proposal is open to comments until 30 July.

A display suite has been set up in the nearby Lovett Tower and a W2 website is taking sales enquiries.

What does the WVCC think should go in place of Borrowdale House if this doesn’t proceed? Something needs to happen to that part of the Square as it is disgraceful.

Unless Woden has to maintain its tradition of having dilapidated sites for 10 years or more before re-development takes place.