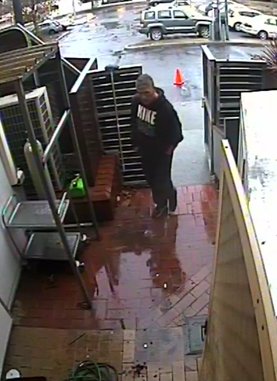 Police are investigating a burglary that occurred yesterday (Saturday, June 1) on Challis Street in Dickson.

Around 4:45pm a male has entered the rear door of a commercial premises, gone up to the office and has taken a money tin containing a sum of cash.

CCTV footage shows the male walking around the nearby area prior to the theft.

The male is described as Caucasian and approximately 30 years old.

He was wearing a black hooded top with NIKE in white writing, blue jeans, white runners, and a black and red backpack.

Anyone who may have been in the area at the time and can assist police with their investigation is urged to contact Crime Stoppers on 1800 333 000 or at www.act.crimestopppers.com.au, information can be provided anonymously.

Ali Geez - 46 minutes ago
Russell Nankervis our ex-PM once said ‘mum and dad should chip in for their kids’ View
David Graham - 2 hours ago
Is it on stalled or installed? View
Russell Nankervis - 8 hours ago
As if students could afford an apartment that close to the Parliamentary triangle View
Community 5

Robyn Jones - 1 hour ago
Where is it located View
Monica Tiffen - 2 hours ago
I find it hard to put a light-bulb in!!!!! View
Michelle Langsam - 4 hours ago
Lucy Baker. For any of your tribe ? How cool is this View
Community 42

Linda Stapleton - 6 hours ago
Changing the date will just be like reconcilliation day.. it becomes a nothing action. remember when they said we had to have... View
Spiral - 7 hours ago
The 26th of January is the date that is fundamental to this country. If the First Fleet (or some other colonizing enterprise)... View
News 13

A Belconnen GP surgery was forced into lockdown yesterday (21 January) over concerns that a patient had recently been to...
Food & Wine 16

@The_RiotACT @The_RiotACT
Sweet Piper had a litter of puppies when she was only a baby herself, and is now at @rspcaact waiting to find her forever home https://t.co/VHBQOCXP4f (4 hours ago)