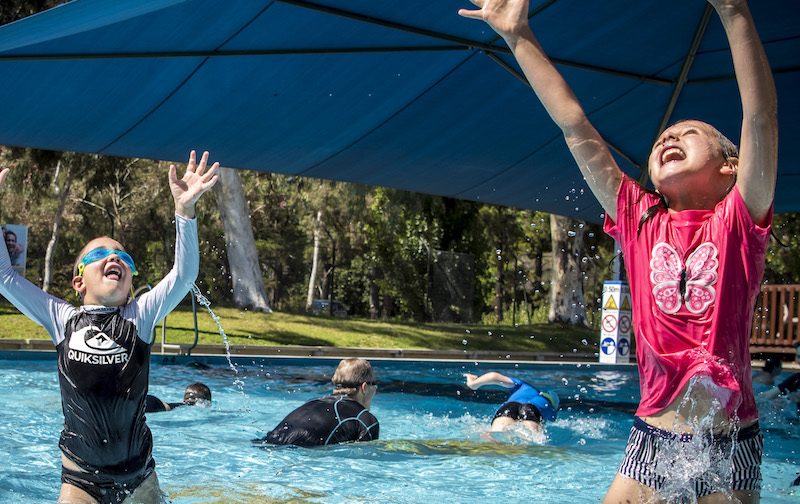 The forecourt of the Dickson pool will receive a temporary makeover this summer. Photo: Dickson Aquatic Centre.

Dickson pool will have a refreshed and colourful courtyard this summer as the ACT Government trials temporary improvements to the outdoor space off Cowper Street.

The current forecourt will receive landscape improvements, shade, seating and bicycle parking as it works towards permanent designs for the space.

Dickson Aquatic Centre spokesperson Taryn Langdon said it was fantastic the ACT Government is investing in a more “inviting and comfortable” forecourt for the pool.

“We work hard making sure that the Dickson pool is a great place for our community to swim, relax and play, and this will not only add to the experience of arriving at the pool, but it will also create an enjoyable space for those moving through the busy precinct,” Ms Langdon said.

“The government’s vision was to create an inviting, colourful space and we are looking forward to the fact that they are bringing the playful, fun and relaxing elements of the pool out into the common space.”

Ms Langdon said the forecourt can be quite a hot place for people as they wait to enter the centre and hopes the improvements will negate the summer heat for patrons.

“I think anyone who passes through the forecourt or comes to the pool can see that the area could do with a facelift, a bit of colour and a bit of shade,” Ms Langdon said. “I don’t think there are going to be many people with negative things to say about the improvements to the area.”

The temporary makeover will be installed from mid-October 2019. They will be in place over the summer swim season and will continue for the duration of the pool’s operation until mid-March 2020.

Minister for Urban Renewal Rachel Stephen-Smith said the government heard that one of the community’s top priorities was upgrading the Dickson pool’s forecourt, with suggested improvements including more shade, seating, bike parking, artwork and water features.

In response to the feedback provided by the community, Ms Stephen-Smith said the trial will test a number of improvements to revamp the Dickson pool forecourt area during summer.

“We want the forecourt to be an appealing, fun space with furniture, shade, landscaping and bike parking. We think these improvements will be great for pool visitors and local residents who use or pass through the forecourt.”

Ms Stephen-Smith said the improvements will be temporary as the ACT Government tests the community’s response and feedback to the new space.

“During summer we will ask for community feedback on the temporary upgrades to find out what is working, how people use the space and what could be improved,” the Minister said. “Following this feedback, we will work with the community in early 2020 to develop a detailed design for budget consideration for permanent upgrades in the future.”

Dickson Aquatic Centre is closed during the cold months but will reopen on 21 October 2019.

Yahoo bring it on..cant wait to get back in Canberra's best pool

Cover the car parking area with Shaw and solar panels to provide the power needs for the pool.

Anna Ji - 14 minutes ago
He deserves a pedestal for his sport. His views should not impact that, especially when it's just his perceived views by one... View
Vasa Krculj - 17 minutes ago
Novak, a great sportsman and a generous human being who donated $1 mil. to the NSW bushfire victims. He must be the first spo... View
Evan James - 8 hours ago
Well said, Tim!✔ View
Community 107

Steve Aust - 43 minutes ago
Colin Parton tell 1 story here View
Louise Flint - 1 hour ago
James Daniels I was sent there for advice before I took a redundancy package. They ignored my superannuation and taxation que... View
Patrick Barrett - 5 hours ago
Dylan your fault View
News 22

@the_riotact @The_RiotACT
You're #vaccinated and #boosted, you wear a mask, socially distance, wash your hands and sanitise, but as Zoya Patel discovered, you can do all the right things and still get #COVID https://t.co/LTSsyklfol (13 minutes ago)