Diversions to ACTION’s services on section of Constitution Avenue 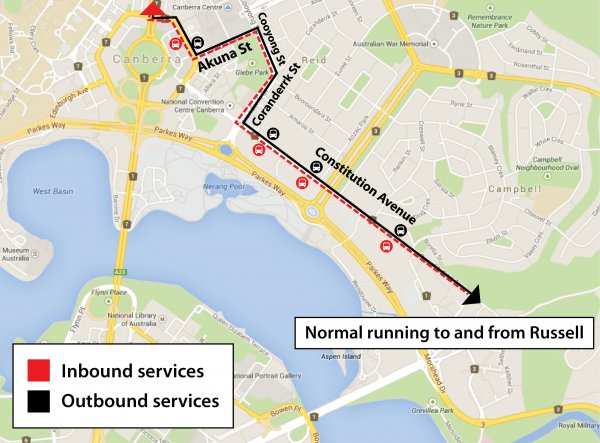 Commencing Monday 1 December 2014, ACTION will implement diversions to all bus services that use Constitution Avenue in the City between London Circuit and Coranderrk Street. The changes will be in place for weekday and weekend services and for the duration of the Constitution Avenue upgrade works.

“Constitution Avenue is a major thoroughfare for buses, with 385 ACTION services using the corridor on a daily basis,” Mr Burkevics said.

“ACTION will divert all services that use the section of Constitution Avenue between London Circuit and Coranderrk Street in order to minimise road works delays and passenger inconvenience.”

“In addition, all Constitution Avenue services will now depart from bus stop 3003 outside the Commonwealth Bank and all blue rapid services will move to stop 3004 outside the Waldorf Apartment Hotel instead of those currently being used on London Circuit,” Mr Burkevics said.

Mr Burkevics said the diversions will be in place for approximately 12 months. Signage will be placed at bus stops where changes have been made and ACTION staff will have a visible presence assisting passengers to transition to the new arrangements.

“I encourage passengers to refer to ACTION’s website for further information about the diversions and to use NXTBUS to monitor the progress of their bus.

“I would like to thank all passengers for their patience and understanding whilst these diversions are in place,” Mr Burkevics concluded.

For more information and maps of the diversion, please visit www.action.act.gov.au or call 13 17 10.

Andrew Brettargh - 22 minutes ago
Multi story and solar panel the top.. pays for itself.. View
Tom Adam - 3 hours ago
Why won’t they make it multi storey, instead of stealing parklands?? Not a wise investment.... View
Steve Herczeg - 7 hours ago
I've always wondered why there's a statue to celebrate single mothers at the top of the street. View
Property 36

Elroy Jones - 43 minutes ago
If you'd like to live in a rural setting then perhaps consider moving away from the city. View
Property 5