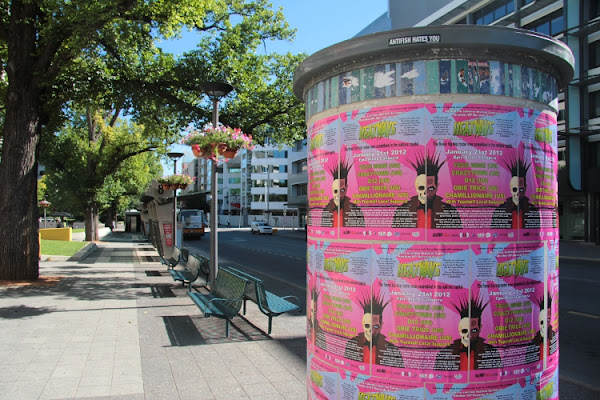 The weather can’t get any colder and Canberrans are returning to normal life.

Just leave your thoughts in the comments!

Sculpture Bar at the NGA is on!

KANG GANG ARE DOING THEIR FIRST TOUR. MARF LOTH IS COMING ALONG FOR THE RIDE TO SHOW THEM HOW DREAMS CAN BE EASILY BROKEN BY POOR ATTENDANCE.

Cat Cat were here recently and put on one hell of a show. I didn’t make it but i heard it was good. Waterford are from Canberra and they sound like a time-machine transported the lot of them back to the days of Big Star but with MODERN tendencies.

Brisbane’s Loose Grip are going to be offended when they realise non of the other bands on the Canberra bill are hardcore bands. But it won’t matter because its going to be good. If anything come to see them before they go to Sydney to play with Dead Farmers.

Heavy Yolks started out as a comedy act. Then the comedy turned into maniac violence. They have never sounded better. Think Powder Monkeys, Beasts Of Bourbon, Royal Trux-wah-wah and some other more “Aussie pub rock” but with Mothers Of Invention-style absurdity. Last time i played with these guys in was at a acid-house pool party in Footscray and it was incredible.

Don’t know the bands? TAKE A GAMBLE. LIVE A LITTLE.

From the RiotACT calendar:

— Behind the Lines at Museum of Australian Democracy

— Rare fossil display at the ANU

— Skate In The City

— Impressions at the Portrait Gallery

— Handwritten: 10 Centuries of manuscripts at the National Library

— It’s the Renaisance for the summer blockbuster at the NGA

— Out of the West exhibition at the National Gallery

Kristin Smith - 5 minutes ago
Yumyumyumyumyum!😍😋 I've always loved the food - and the doughnuts are next level! View
Food & Wine 15

Kate Tricks - 2 hours ago
Bad news for those of us looking to buy... View
bj_ACT - 6 hours ago
Chewy I’m surprised by your views based on some of your previous comments over the years. I’m not sure that property Deve... View
Sandra Noonan - 7 hours ago
No no no !!!!! View
Opinion 7

HiddenDragon - 3 hours ago
"The ACT needs home-grown solutions that fit with its culture and the aspirations of its people and origins, not imported min... View
Gabriel Spacca - 5 hours ago
Well I feel sorry for those who are coming here to escape the anthills of Sydney and Melbourne. The current government is try... View
Marc Edwards - 7 hours ago
Ian Bushbell is about 50+ years to late View
News 11

HiddenDragon - 4 hours ago
In light of this - https://the-riotact.com/act-government-systems-not-rated-to-receive-security-classified-information/430823... View
Acton - 8 hours ago
You hope. I admire your trust in the efficiency and perpetual good will of an indulgent government. However, you have forgott... View
Acton - 8 hours ago
“Those who would give up essential liberty to purchase a little temporary safety, deserve neither liberty nor safety.” Be... View
What's On 5

Roslyn Russell - 8 hours ago
My little granddaughters will adore it! View
News 4

chewy14 - 9 hours ago
Yeah these claims about human rights are ridiculous. Whilst I support voluntary euthanasia, our elected government does not.... View
Acton - 12 hours ago
I agree with our need for easy access to voluntary euthanasia as decided by the individual and not vetoed by anti-choice reli... View
Property 2

realist - 11 hours ago
Isn't it funny that Ben Ponton has taken so long to speak up. Can the government impliment changes before the Developers comp... View
Motoring 1

Kerry Crampton - 11 hours ago
We live just inside the Queanbeyan border (behind the Airport motel) and we hear the noise from the speedway but it doesn’t... View
News 27

mf64 - 17 hours ago
Plus Canberra has the worst most self entitled drivers around. Having driven all over the country and around the world by far... View
show more show less
*Results are based on activity within last 7 days

Time to take care of our community in a bushfire emergency

@The_RiotACT @The_RiotACT
Meet Linus, a cat who has had a tough start to life and is at @rspcaact waiting for a special owner who has plenty of time & patience to help him settle into his forever home https://t.co/o8YjOFw68q (5 hours ago)

@The_RiotACT @The_RiotACT
Here’s your chance to snap up a delightful, established home in a sought-after area with views galore and close to schools, shops & childcare https://t.co/ers2rZj1x7 (6 hours ago)