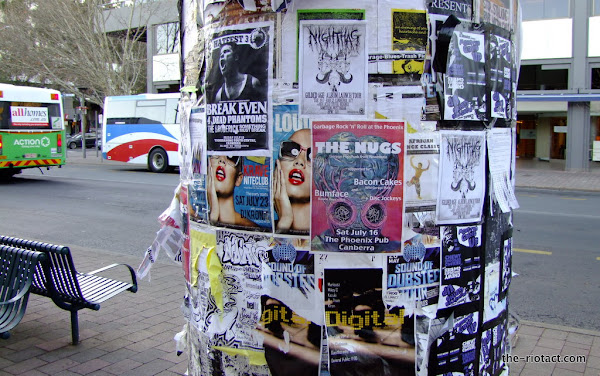 Time to plan the weekend hivemind!

What should people be getting out to in Canberra this weekend?

Visit O’neill’s Pub Dickson. You might get a chance to win a free party for you and your 9 friends! All you got to do is visit the new party room and take a photo with your friends and send it to their email: partyroom.oneillspub@gmail.com. Then it will uploaded to their Facebook Fan Page: http://www.facebook.com/oneillspubdickson….check it out for more details!

Child Players ACT’s Child Play children’s theatre group production in the July school holidays 2011 is an original play adaptation of The Jungle Book based on the classic Rudyard Kipling stories about Mowgli the man-cub raised in the Indian jungle by wolves. The Jungle Book is the seventh July production by the Child Play group, following on from Peter Pan in 2010 and Charlie and the Chocolate Factory in 2009.
Child Play is a unique theatre training program created by BJ Anyos, the Artistic Director of Child Players ACT. The program has been running for seven years and gives up to 40 kids aged between 10-16 the opportunity to learn all aspects of theatre, both on-stage and back-stage. Participants are formed into two casts (this year Pride and Power) and while one cast is performing on-stage the other cast are undertaking all the back-stage roles that contribute to a quality theatre production including stage management, lighting and sound, props, make-up, set moving etc. Cast members also provide live sound effects.
The story of Mowgli is about belonging. He is accepted by the wolf pack as a baby but time passes quickly and Mowgli is soon a 10 year old boy. He has many animal friends that help him learn the ways of the jungle including Baloo the old bear and Bagheera the wise panther. The jungle is also home to the cheeky monkeys who want Mowgli to be their leader. But Mowgli also has enemies such as Shere Khan the tiger.
Mowgli has to ultimately to decide where he belongs – in the jungle with the animals or in the village with men. Which will he choose?
The Jungle Book will be performed at the Belconnen Theatre, Swanson Court, Belconnen at 10.30am and 2.00pm on Thursday 14, Friday 15 and Saturday 16 July and continuing in the second week on Wednesday 20, Thursday 21, Friday 22 and Saturday 23 July.
Tickets are $17 and bookings can be made either to 6257 1950 (Monday – Friday, 10am – 4pm) or by visiting http://www.canberrarep.org.au. Tickets are also available at the door one hour before (cash sales only).