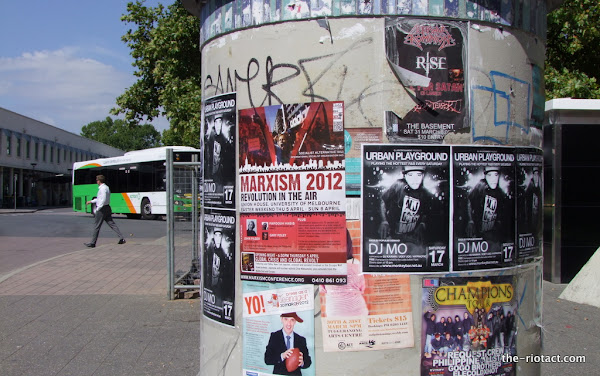 OK Rioters, the sun is shining and at the end of a short week there’s another weekend to plan.

What’s worth seeing and doing around town?

I can’t believe this didn’t pop up on here sooner, but The Blanks (aka Ted’s band from Scrubs) are on tonight at Zierholz chUCkle hut – Uni of Canberra.

Ballet in the park tonight!

Last years Nirvana Tribute was such a huge success that we’ve decided to do it again!

** VARIODIVERS performing songs from IN UTERO

The first band kicks off at 8pm so get there early!!

The Woden Tradies also has $5 schnitzels on Fri nights and drink specials, so come along early and enjoy!

Tickets are available through MOSHTIX (follow the link) and on the door. Tickets go on sale Feb 3rd at 7am.

————————–
Don’t forget, the GREENROOM is only open for the Month of March as a trial. If it goes well, it will be rebuilt as a permanent live music venue. So get along to one of the shows they have on during the month of March!! Help support live music in Canberra!!
————————–

Hope to see you all there!

And BarCampCanberra is on tomorrow: http://barcampcanberra.org/profile/
A few tickets left I hear.

We gotta get out of this place! @ Smiths

Lifeline Canberra Autumn Book Fair is on Friday, Saturday and Sunday. Stock up on some reading material for the cooler months! Gold coin donation with proceeds going to Lifeline Canberra.

— One Wall, One Night

— Going To Hell In This Handy Basket @ The Phoenix

— Zoopagoo Funks the Ladies @ The Front

— Freshly Ground presents NOT IN THOSE SHOES @ The Newsroom

— Poetry is the real winner @ The Phoenix

— Philo’s Fiddler on the roof

— Take the kids to meet the Giants

— Superset Me at Dendy

— So you think you can hipster?

— Behind the Lines at Museum of Australian Democracy

— 10 Centuries of manuscripts at the National Library. Handwritten

— Renaissance at the NGA

Lillie Rudland - 3 hours ago
David Rudland just say when! View
Jody Kisbee - 8 hours ago
Sounds like a plan View
Jodie Roberts - 8 hours ago
Julia McFarlane what are you two up to this weekend? This looks lovely View
Opinion 34

Matt Henry - 7 hours ago
Allison Jay if she says that then u could only blame boring parenting. Canberra is a great place to bring up kids ans live. View
Allison Jay - 2 days ago
Kat Rothwell haha yes indeed View
Sport 5

Border_Libran - 11 hours ago
Hi A_Cog, I’ve just found your comment, if you still reside at Oaks Estate I would be interested in contacting you, I was p... View
Breaking 1

Capital Retro - 11 hours ago
How unlucky is this dude? I mean, it's hard to even spot a police car in Canberra let alone hit one. View
Property 15

Harley Quinn - 13 hours ago
Canberra has NEVER been a peaceful city. I was kidnapped in 1993. It's nice that some people still have that illusion though. View
Business 18

Bob Jones - 19 hours ago
Deb Wheare And Lynne Meredith... I've heard because of the more right someone who identifys as being an Aboriginal or Torres... View
Kev Martin - 1 day ago
I find If you stop breaking the law, you don't get locked up View
Deb Wheare - 2 days ago
Jacob Torresan face palm View
Community 12

@The_RiotACT @The_RiotACT
Stories about Summernats, snakes, Skywhale & a new venture from the team behind Bombolini doughnuts all featured among the top stories on the RiotACT this week. Catch up with our latest newsletter https://t.co/4JyEruj9tg (6 hours ago)

@The_RiotACT @The_RiotACT
Eleven years after he was first drafted into the AFL while still at Erindale College, Jason Tutt is returning home to Ainslie Football Club https://t.co/0D5tHBFya1 (7 hours ago)

@The_RiotACT @The_RiotACT
This remarkable seafront complex for sale near Narooma is your chance to purchase a unique residence with optional tourism business opportunity https://t.co/Fze10GhLLY (8 hours ago)