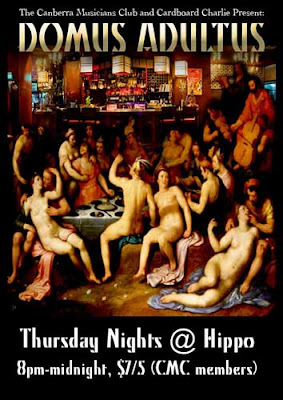 It’s been many a year since I darkened Hippo’s door on Garema Place. I had a very strange night there years ago* and always found other places to be thereafter.

But with an unexpected influx of free time I decided to go check it out.

Don’t be fooled, this is not a second night of Bootleg Sessions. The vibe of the bar is very different, as is the crowd that comes in. I’ve never seen so many non-caucasians at a local music event and it was great.

With the audience all perched on low padded stools at least it was easy to see the performers, even in the absence of a stage.

On the night my $5 got me performances by Amazing Brainboy, Glenroy Heights, The Bluffhearts, and The Blue Ruins.

The bar staff, (a pair of easy-on-the-eye young ladies) on the other hand, clearly wished the punters would just drop dead and leave them free to facebook on their laptops.

Bar prices are at Hippo’s customary stratospheric level. You may as well just order the cocktails and make a night of it because an $8 Corona won’t satisfy like a mojito.

Anyway if you’re looking for something to do on a Thursday night it’s a classy setting to soak up the music, just make sure you have a couple of cheap drinks before you head in.

Slideshow and reminiscence below:

It was a Friday night and it felt like a million people were crammed into the small room that is Hippo.

As much as anything I remember a haze of cologne, perfume, incense, and the sickly sweet stench of drying liqueurs. I was blurry from a string of gin and tonics and sweltering in the extreme heat that only too many bodies crammed together can generate.

Somewhere in all that I was talking to a well presented woman still in her power suit from her office. Some time around midnight she suggested I come back to her place to keep talking.

In the taxi back to her apartment in Belconnen she kept poking me with her sharp fingernails saying “We’re just going to talk”. I kept agreeing, as much as to stop the poking. I was starting to wonder what the hell I was getting myself into.

Somewhat predictably the minute we were through her door she was ripping my clothes off.

What followed was a nightmarish succession of tears, vomit, punching (of me, not by me), screaming, and occasional moments of intimacy.

As the sun rose she finally fell asleep and I quietly dressed and made it away on my toes hiking 10k back to my place of that time.

I’ve never been quite the same man after that.

Very little of that is actually Hippo’s fault, but it certainly made me nervous. Last night was just good music and good times with good people.

What we really need is an ‘I got my end away at a club’ thread.

Johnboy, I know it was traumatic but it makes very funny reading. I’m just glad you made it out the other side in one piece. She was probably just getting around to the chainsaw bit when she ran out of steam!

I haven’t been to Hippo for ages – the music was good, but the drinks were appallingly overpriced and the staff entirely uninterested in talking to anyone that wasn’t up to their lofty standards.

Wow. I’ve written four or five replies to this, but nothing I can write can top it! A tip of the hat to your sir!

Elizabeth Ann Thurbon - 6 minutes ago
Kate Bee I don’t know the figures on that sorry View
Tina Maree Williams - 1 hour ago
My other half and I saw the writing on the wall when the eyesore of Whitlam increasingly impinged on our view driving down Wi... View
Demi Naylor - 9 hours ago
Well.. you know.. f they can afford a house or find one suitable to rent.. View
Opinion 66

rossau - 14 hours ago
Commandeering all land and rental property is no avenue to request the government to financially support the practice. Get ou... View
rossau - 15 hours ago
Julie Macklin, that's a great idea. The point is though, an owner has the option on upgrading on the gounds of comfort, cost... View
show more show less
*Results are based on activity within last 7 days

A huge family home in Florey has sold at auction for $1.6 million, setting a record for the Belconnen suburb....
Opinion 73

Whether you’re catering the next big family BBQ or preparing for a Sunday roast, any good home cook will know...
Opinion 73