Double standards: What do we really want from sports stars? 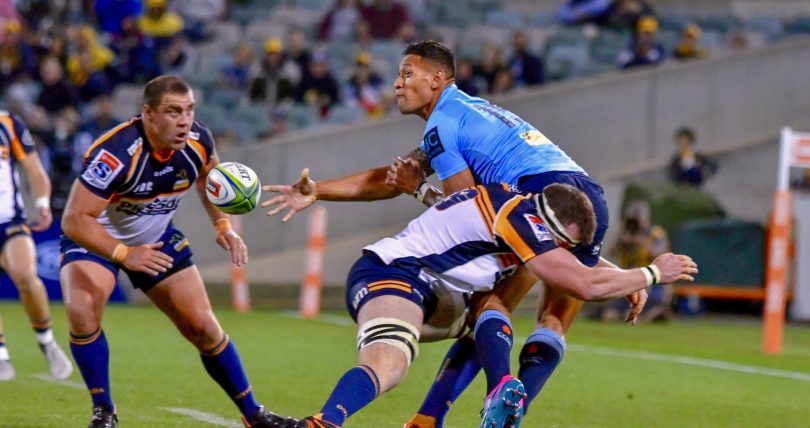 How would Israel Folau’s case be handled at a grassroots level in Canberra? Photo: Jaye Grieshaber – Jayzie Photography.

As the fall out continues at a national and international level over a range of issues concerning player behaviour, free speech and genetic makeup, it is becoming increasingly clear that there has never been more division over community expectations.

Rugby Australia acted on Israel Folau, saying his views don’t reflect those of the national governing body. And surely concerns about a sponsor backlash would have influenced the decision.

Broadly though, Folau’s publicly expressed views on homosexuality are at odds with the majority of open-minded Australians. His views could also be considered harmful, given his status and influence, particularly for young people who are establishing their identity.

The question of freedom of speech also becomes a factor as professional sports encourage their stars to reach out to their fan base to reveal more about themselves and engage through social media in particular.

So how would this be handled at a grassroots level in Canberra? What would happen if somebody involved in local sport decided to sprout homophobic views publicly on social media?

Unless it snowballed into a media issue, there would be little in the way of a sponsorship backlash and pressure on the sport to exclude them. More than likely the sports and teams would look to deal with it internally. The player might be forced to front his or her teammates to offer an explanation and discussion, as a form of mediation, would follow and the sport would hope that is the end of it.

Then there is Caster Semenya. This is such a difficult story, particularly when we are encouraging sportspeople to compete, drug-free, in order to make competition as fair as possible. Now Caster Semenya is being asked to take drugs to reduce her naturally occurring high levels of testosterone. What a dilemma. What does this mean for local sport? Is there now a hard and fast rule in local sport about naturally occurring, high levels of testosterone among female athletes? The answer is effectively ‘no’ at the moment.

And what about the Jack de Belin issue? How would that be handled at a grassroots level in Canberra? In De Belin’s case, the NRL stood De Belin down after he was charged with the aggravated sexual assault of a young woman. He has pleaded not guilty and believes that the NRL has no right to stand him down, as the court decision has not been made. The NRL and ARL Commission stood De Belin down under the NRL’s ‘no fault’ rules.

What is effectively happening is that at a national and international level sports are, at times, making decisions that are difficult to translate to the local level.

Local sports are constantly educating young sportspeople about social responsibilities, alcohol and drug awareness and social media protocols. But how effective can they be in actually stopping people from taking part in sport unless they dope or commit a violent act?

Governance at the local level will need support if the expectation is that decisions at the national and international level are to be reflected at the grassroots.

Indeed there is a double standard with Folau being put through the wringer by the Australian rugby administrators but in New Zealand, where Muslim convert Sonny Bill Williams supports a Islamic cleric who has extreme anti-homosexual views is not admonished in any way.
https://www.stuff.co.nz/sport/rugby/88724462/sonny-bill-williams-bmw-sponsorship-reviewed-over-links-to-muslim-extremists

Dwayne Still - 2 minutes ago
Lucky to escape View
Chris Durban - 10 hours ago
A warm welcome, my best wishes for their future lives here. I hope they settle in and find peace and happiness 🤗... View
Cheryl Clare Riordan - 11 hours ago
What a lovely photo of gratitude and relief .... View
News 32

Hunter Smithers - 14 minutes ago
Staring at your speedo instead of watching the road is far safer for pedestrians !! View
Bob Foster - 8 hours ago
You had me till the 2nd sentence of your 2nd paragraph Gai Wil THEY need to realise that roads were built for cars etc, and a... View
Matt Flagget - 8 hours ago
Tony Siciliano yep, us too - gone. Born, raised and lived most of my life in Canberra but it’s green/left underbelly is rot... View
News 23

Bob Sekhon - 2 hours ago
Our apology for the very delayed response. The Temple is open to all and anyone may attend when it is open. No special invita... View
Opinion 54

@The_RiotACT @The_RiotACT
#Canberra author Dominic Cookman thought he would never find a #publisher for his debut #novel, but a UK company is releasing it on 28 November. Now his attention is turning to book number two, set in the ACT https://t.co/Hor9cATN8R (9 hours ago)

@The_RiotACT @The_RiotACT
Surveyor's Hill is another local treasure for #Canberra wine lovers. Matt Farrah has the lowdown on the family-run winery producing excellent #wines that are easy on the wallet https://t.co/3PAXJXnvPq (10 hours ago)

@The_RiotACT @The_RiotACT
Want to #buy into a new estate with big #blocks? Hamilton Rise at #Yass could be just what you're after with tree-lined streets, a park and a community precinct. Expressions of interest are being sought now ahead of the land release https://t.co/nN9iPOgf0D (11 hours ago)