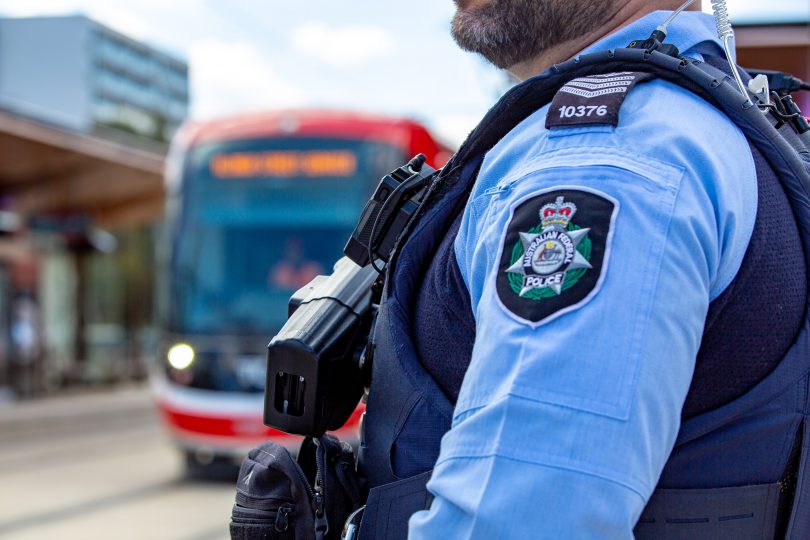 Police have fined more than two dozen pedestrians jaywalking on the corner of Northbourne Avenue and Barry Drive as authorities clamp down on light rail safety after a serious accident on the corridor earlier this week.

After a 61-year-old man was rushed to hospital in a serious condition after being hit by an LRV on Monday morning (12 August), ACT Policing are conducting high visibility patrols at busy foot traffic intersections as part of Rail Safety Week.

Acting Officer in Charge of Traffic Stephen Booth said much to his dismay, more than double that number of people were fined at the same intersection this morning. He slammed pedestrians’ behaviour, saying it was “unacceptable”.

“Crossing the road against the lights is both irresponsible and dangerous,” he said. “We are frustrated that people are not only ignoring the signals but they are doing it in front of a highly visible police presence.

Police will continue to conduct high visibility patrols throughout this week.

I commend the ACT police for enforcing laws, which as a newcomber to the ACT, I have noticed are ignored by many at their own perril. The police are there not only to enforce the law but also to protect people from their own stupidity, ignorance and impatience. Better to be a minute or 2 late than being mamed or killed.
I can only hope they increase their presence on ACT roads. Their seems to be a similar ignorance (or lack of respect for the law) by many ACT motorists. Tailgaiting, speeding and driving recklesslessly seems to be the norm in the ACT for many drivers. It is evident to me the fixed speed cameras aren’t working and I rarely see mobile cameras. There is nothing like highway patrol cars and bikes patrolling our roads to get the message across. I also believe a crackdown on speeding and tailgaiting needs to occurr as it seems to be widespread in the ACT and the best way to do this is more unmarked police cars issuing steep fines and loss of demmerit points.

If they want people to follow the lights, then the lights need to be pedestrian friendly. There is no way to cross diagonally anywhere in this city without waiting a ridiculous amount of time. Before the police showed up, everyone crossed Barry Drive half- way (going south) while Northbourne south-bound had a right turn signal, then walked along the median (towards ANU) until the crosswalk light. Now I’m late to work because of spending more than 20 minutes of my walk-commute at crosswalks- a walk that shouldn’t take more than 35 minutes if I didn’t have to stop and wait at every corner.

> irresponsible and dangerous,
lights are out, no vehicle visible for miles, am i supposed to wait there for however many hours it takes for the system to be up and running again?
i cross when it is safe to do so, not when i get permission from a light.

It would be good if they looked at harm minimisation together with punitive measures that’ll wear off when police move on.

The reason people walk against the lights is because you have to wait too long, for each direction of cars to have a go 2 or 3 times to cross the street.

In other cities, they set the lights to favour pedestrians and guess what? Pedestrians are happy to wait.

This is why pedestrians should have to be registered walkers, and display plates at all times when walking!

All hail the tram!