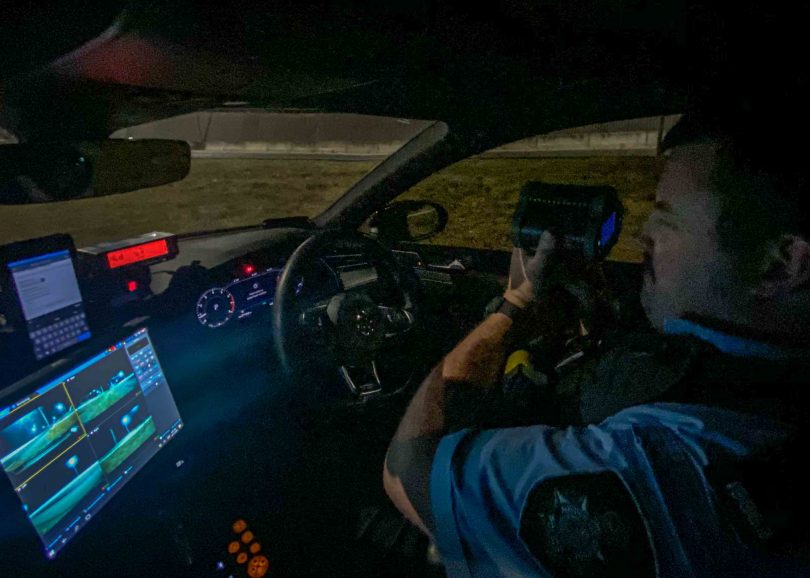 It seems too many Canberra motorists are still rushing to meet police, with speeding offences bringing them to highway patrol attention.

Earlier this month, ACT Policing revealed on Facebook that speeding offences for 2020 had already surpassed the full 2019 calendar year. The post generated feedback from community members who expressed their concerns about speeding, especially early in the mornings.

In response to the community, ACT Policing Road Policing conducted a targeted speeding operation. Across two early-morning starts, they detected a dozen motorists exceeding the speed limits on major roads.

The locations targeted included the 80 km/h zone on Horse Park Drive, Throsby, where the following offences were detected:

Additionally, a 29-year-old Moncrieff woman in a Toyota Seca was detected at 81km/h in a 60km/h zone on Horse Park Drive in Bonner. 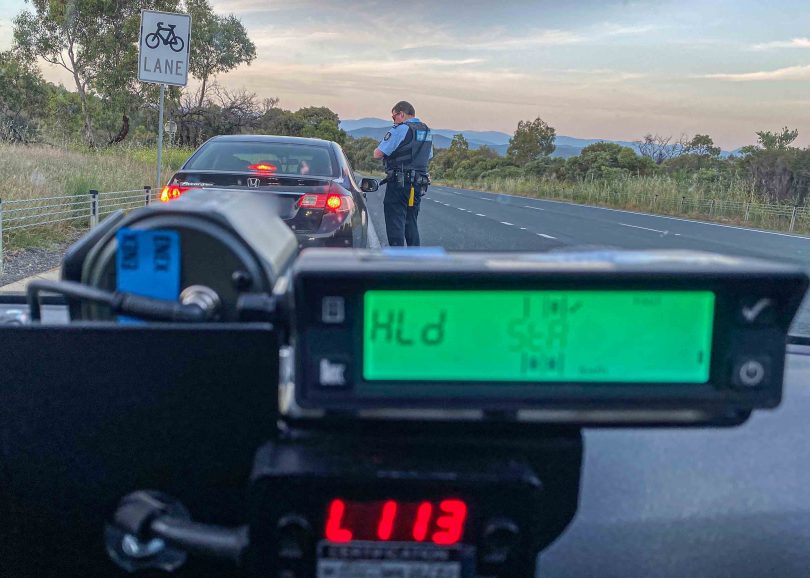 In the 100 km/h zone on Majura Parkway, Majura, police detected:

Other motorists detected speeding in the operation were: 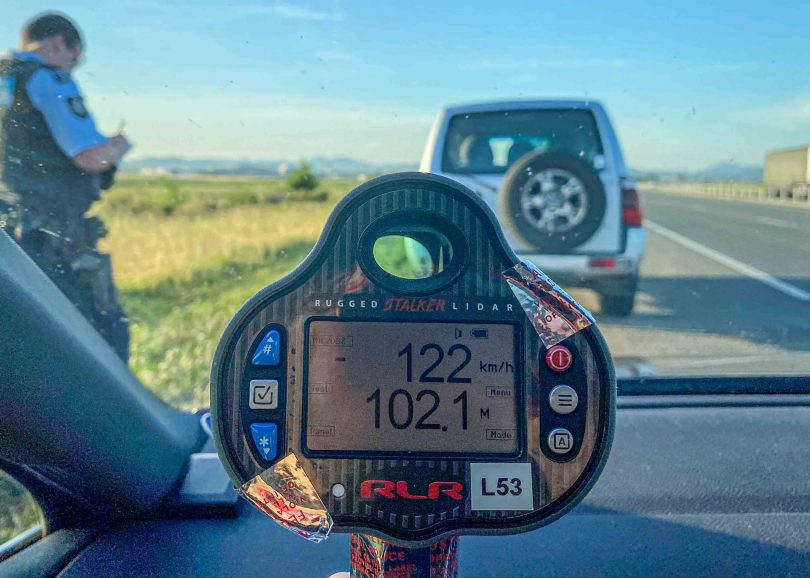 All up, $5428 in fines were handed out and a total of 34 demerit points were issued.

ACT Policing Superintendent, Road Policing and Planning Corey Heldon said these infringements showed speeding motorists could be detected at any time, on any street.

READ ALSO Speed kills, so why carp about driving a little slower?

“While some people might think it’s okay to exceed the speed limit early in the morning, when there’s less traffic on the road, and that they’ll get away with it, they’re wrong,” Superintendent Heldon said.

“The time of day makes no difference. If police see you speeding then you can expect to be stopped by them.

“Speed limits are there for a reason. They are the maximum speed you’re allowed to drive at. The faster you drive, the more likely something is to go wrong, and the worse the outcome will be when that happens.”

Police are urging people to report any areas where they believe speeding drivers are a regular problem. That can be done, anonymously, by contacting Crime Stoppers ACT.

Earlier this month ACT Police launched a road safety campaign, asking speeding motorists ‘Who are you rushing to meet?’ and reminding them it would very likely be a police officer.

I’m sure every one of these people consider themselves good drivers.

If we put a fleet of unmarked police cars on the roads, or some small unmarked cameras, and issued, say, $500 fines to every speeding driver, I suspect we could properly fund services like health, education, etc, without the need for taxes. The Tuggeranong Parkway would generate hundreds of thousands of dollars per day alone.

For any law to have effect at least (if not more) two things are needed. 1. Published reason why we have it. Appears this is not the case re speed limits (eg what was considered: engineering, traffic volume, pedestrians and other road uses, intersections, merging, history/cause of accidents). If they can’t explain it why should we adhere to it. Secondary; equitable punishment/consequences which fines in Australia are not. They are a crap form of mandatory sentencing eg; a student on next to nothing is fined the same amount as a CEO. Some with money just look at a parking/speeding fine as a annoying cost of doing business they are willing to pay. Admittedly there is the points system but this is not always applied without prejudice either.

The reasons for a particular speed limit in a particular place is based on a standard manual. The manuals are highly bureaucratic and also cover requirements for road widths, geometry, signalling and the like. It means that the descisions on road design and speed are a prescribed process rather than requiring any real design or thinking (hence some of the weird posted limits in places).

I have no issue with people getting caught for speeding so long as the signage (speed limit) is clear.

So you never see the cops on the road but now they are doing a blitz – at the same time there are calls to lower Canberra’s already overly conservative speed limits.
Coincidence??
And so many of you support this government believing they’re doing it for you…

A good place to catch people speeding is in the 40kmh zones around shopping centres. In particular, Benjamin Way in Belconnen, just down the road from the police station. Speed bumps don’t seem to slow anyone down, nor do pedestrian crossings, in fact drivers don’t even stop when someone is on the crossing…
I’m not even sure why speed bumps or 40kmh road signs are in place, drivers just ignore them.

Chris Lucas surprised not to see yr Ute in the foreground there m8!!

They should be on Adelaide Avenue- speedy tailgater central.

🙀. Some perspective. My nephew a week after getting his license in Europe. Legal. If he was naughty and did 150 it’d be a $25 fine.

Some perspective, it’s much harder to get a licence in Europe than in Australia, the testing is much more stringent and the respect for the rules and other drivers is also much higher.

David Murn and are the revenues raised through fines invested into further driver education in AUS? No.

David Murn dude have you seen us Russians drive? If haven’t head over to YouTube, half of site is filled with Russian dashcam vids, “Europe” deffs doesn’t have more respect for road rules and other drivers trust me.

David Murn you haven’t been to Europe recently have you? Testing may be stringent but respect is not high. In Paris they don’t even respect pedestrian crossings!

Looking at the locations and speeds listed they really don’t seem unsafe at all, especially at a time with hardly any traffic. These are safe & straight dual carriageway roads with good visibility & good safety features. Police should be targeting dangerous driving in residential areas, not safe driving on safe roads.
p.s. there’s clearly a good case to be made for raising the speed limits at these locations.

I think it would be far more dangerous to be driving with 4 computer screens and a split-screen video to distract the driver, than to be driving at speeds under 100km/hr on a dual carriage-way.

Cops back in the old good days didn’t rely on Lenovo laptops and fancy laser scanners to catch people doing like 5kms over the speed limit either.

Rooster James I doubt that all those gizmos disappear like a Transformer, when he’s driving.

Rooster James what makes you think engineers have anything to do with setting the limit on a wide straight safe road? GDE was limited to 90 by politicians because local residents complained that 100 would be too noisy. Even if that hadn’t happened, the ACT has a blanket limit of 100 regardless of how good the road is, again this limit was set by politicians. The new section of Monaro is as good as Hume Highway and there are serious calls from industry bodies and experts for most of Hume Highway to be raised to 130, but this is being resisted by politicians.

Martin: you need to do a little more research before you write comments like that.

Conclusion: it’s safe to go faster than 90 on GDE, but the cops will still book you even though you are driving safely. Personally, I’d rather the cops focus on dangerous driving (of which there is plenty in Canberra, at all speeds).

Simon Hickey he’s written a few. Might need to be specific. And just saying someone needs to do research, without providing counter research is a bit of a waste.

John: no, i directly replied to his comment, and no, if he bothered to google how speed limits are set, he would have quickly found out how dumb his comment was.

Simon Hickey facebook, at least on my phone does not show which comment you are exactly replying to. And respectfully, google it, is not a good reply to anything. You will know that Google will return results if what ever you want to say. Its just an index system not an authority.

And yes speed limits have a substantial political/public service involvement. For a start no major changes are approved without the minister. NT unlimited speed limits is a political football. 130km/h on highways is politically courageous.

Why do identical roads in different countries have different speed limits. Does the engineer change based on the language be spoken? Why does NZ have a speed range on some of their roads?

Engineers recomend a speed limit or range of recomended limits. This must be approved by the relevant authority. And that authority can assist setting the guidelines the engineer has to work with.